We somehow lost our digital camera’s battery charger a while back. Since we buckled down and purchased a replacement one, I have been looking around for random things to take photos of. It is one of those cases where you do not know what you have until you have lost it… then you get it back and go nuts…

I am sure I will get bored with taking photos of random things again very soon. Until then, I will populate a new blog category: Prized Possessions. I can be incredibly materialistic at times, and get a kick out of showing off the random crap I have accumulated over the years. Hey, some may call that a “character flaw”… I call it “great blog fodder”.

It is no secret that I moderately worship at the feet of a one Mr. Ryûsei Nakao. It is not as creepy and overboard as I might lead you to believe — I mostly just play it up for amusement. At the same time, I really do think he is pretty amazing at what he does, and is worthy of the respect he receives. While Freeza is one of his best-known and well-loved roles, Nakao has brought his voice to tons of other engaging characters. I have recently learned about his role as Mayuri Kurotsuchi in Bleach (which makes so much sense…!), but one of my personal favorites is that of Iizuka from the Rurouni Kenshin OVAs (you know… the one OVA series… perhaps if I say that enough times, it will become true?). As a stark contrast to Freeza and Kurotsuchi, Iizuka is just a regular guy. OK, fine… he is a a mole within an organization and not really just “a regular guy”, but compared to some of the other notable characters Nakao has played, that is the best description possible.

I think the guy is incredibly talented. Can you guess which of the items on this shelf is one of my most favorite things ever in the whole world like totally radical man? 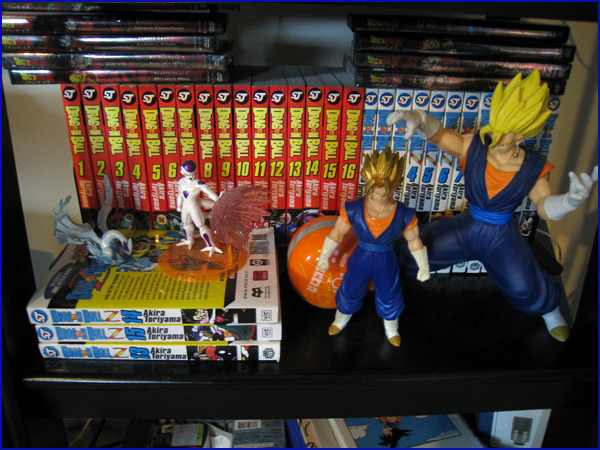 Meghan grabbed this for me at Animazement 2009 when Nakao was a guest of honor (alongside Trunks’ voice actor, Takeshi Kusao). Notice the autograph on there? Here is a close up: 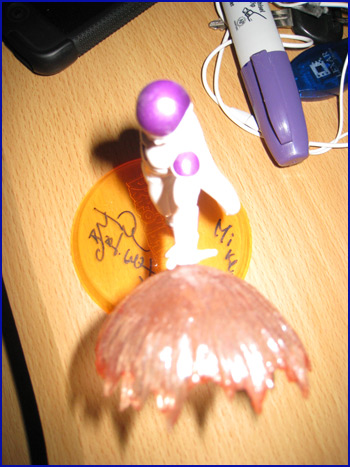 What did I tell you?! Nakao wrote my freakin’ name. Radical.

I have been looking for something along the lines of a see-through (maybe glass?) cube that I can put the figure inside of to keep dust off the base. Any suggestions on what I could get?

I live in the real world. Let’s all be honest, here — the web exists as it does today because people lift content from each other. News aggregators, forums, social networking… today’s Internet is a … [continue reading]

I won’t lie. I sometimes lurk around other forums. There are only a couple I regularly keep up with (my own, the FUNimation DB forum section)… but there are a couple others I have bookmarked … [continue reading]