I won’t lie. I sometimes lurk around other forums. There are only a couple I regularly keep up with (my own, the FUNimation DB forum section)… but there are a couple others I have bookmarked that I check in on every couple of weeks. I feel somewhat of a responsibility to keep up with what the general zeitgeist seems to feel, think, and discuss. Even if they are discussions I have zero interest in participating in, if I am going to call myself an authority figure, I should at least be aware of what the current trends are.

This thread on the GameFAQs “DragonBall – General Message Board” area piqued my interest. I have a morbid curiosity in seeing how people explain Japanese pronunciations to other people in textual form. Someone wanted to know how to pronounce “Kuririn” — a valid question, especially considering that I have been working on my own pronunciation of the name for years. I know how to pronounce it, obviously, but my linguistic lack of skills have always slurred my “r” into “d” sounds! I think I have gotten it down pretty well these days… though I am certainly no Julian ^_~.

Anyway, this response made me chuckle:

We have done whole podcast topics about “today’s fans with regards to the series and the way they view it (both the Japanese version and the English version, in relation to their [dis]placement)“. It is totally fine if you want to be that way — as Julian has humorously quoted (and I paraphrase), “If English was good enough for Jesus, it’s good enough for me!”

Why bother with the “Japanese names”…? You speak English! It makes so much sense! We won’t even bother with examples like “Cell” and “Trunks” which Japanese-ify “English” words with their inherent extra syllables, but: 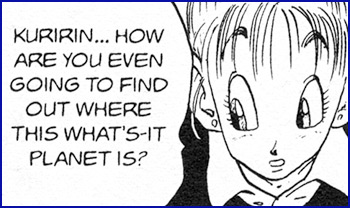 I mean, shit… what about other shows where a character’s name is a Japanese name…? Do you “translate” it for fear of being seen as anti-American? Do you call the author of the series “Bird Mountain“, and if so, how do you reconcile the fact that his studio is literally called “Bird Mountain“…?

Why is it OK to keep some names with their Japanese pronunciations, and then disregard all others while scoffing at anyone who doesn’t choose to use your preferred dub’s spelling? Much like folks who have only read Viz’s translation (which has exclusively used the spelling “Kuririn”), I would wager that if the name was never changed to “Krillin” in the first place, these folks wouldn’t even blink at “Kuririn” all these decades later. I hate to play this card, since I am so sick of talking about it (and you are so sick of hearing about it)… but is it not simply because FUNimation just happened to have decided to change that name?

It is entirely inconsistent. It is ignorant. It is fearful. It is arrogant. It is hypocritical.

The mentality of “STFU your not jap spell/pronounce it dis way” is laughably moronic when you are using other Japanese-based (if not un-changed, entirely Japanese) character names in the same breath.

Yes, I am right and they are wrong. I dare you to argue otherwise ^_~.

(P.P.S. – To semi-quote myself being sarcastic recently… “Shit’s serious, yo.” No, this is not a big deal. At all. It does not affect anyone’s day-to-day life. Just felt like writing about it.)

Daizenshuu EX has been around in some capacity (whether it was named that or not!) since January 1998. Yeah, in internet years, we’ve been around for eons. Once it began to receive any kind of … [continue reading]