Regular fans of Daizenshuu EX no doubt have heard us drop Appule’s name in semi-sarcastic and humorous ways. It has grown into something of an “in-joke” over the years — it is funny enough on its own (“lolz random character”), but the way in which the joke continued to build upon itself adds a little bit to its mystique and hilarity, and may be worthy of discussion.

Many years ago, I started working on a “Character Guide” for the website. It ultimately never turned into anything because I constantly bite off more than I can chew. Whenever I finished a page for a character, I realized I wanted to include even more information, and constantly found myself going back to do additional research. It was a never-ending cycle, so I eventually just gave up. Other areas of the website were far more important and useful.

In 2004, while still working on the section, I decided to develop a page for a character that appeared for a very limited amount of time. I had already done characters like Nappa and Raditz who, while they were only around for a short period of time, could still be considered “major” characters. My stipulation for myself was the character that I did a page for next had to at least have a name — no random characters like “Jingle Village Filler Man #2”. One of the first characters that came to mind was Appule. He was one of the most minor of henchmen, yet the fact that he not only had a name, but had a name that was actually spoken aloud during the anime, is what solidified the choice for me.

The character profile was slightly more interesting than others to write because Appule gained a palette-swap named Oran in the anime who occasionally replaced what might have been Appule in the manga — it was difficult to tell in black-and-white with so many henchman looking so similar to one another. I even enlisted the help of our forum to scan through some of the scenes and figure out exactly which character was absolutely Appule in which scenes. 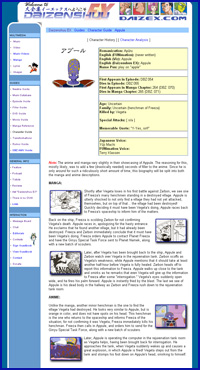 After writing the character biography page, I quickly adopted him as my scapegoat character for random jokes. What really solidified the joke for me was the Sparking! series of video games on the PlayStation 2 (and eventually the Wii) — so many new characters were being tossed into the game, I joked often (on and off the podcast) that when they announced that Appule was a playable character, we would know that they had finally begun scraping the bottom of the barrel. With the first Sparking! game featuring 90 playable characters and its sequel featuring 129, it didn’t seem like there would be many other notable characters to toss in.

In December 2006, Namco-Bandai announced a port of Sparking! NEO (released outside Japan as Budokai Tenkaichi 2) for the Nintendo Wii. We received the game first in North America as a near-launch game for the console, but it took a little bit of time for the game to be released in Japan and Europe. As a fun extra for the delayed port, these versions received a couple new characters to the roster. Guess who was announced? 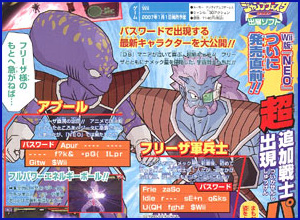 Appule would go on to be a regular roster choice in Sparking! METEOR (released outside Japan as Budokai Tenkaichi 3), fulfilling his destiny according to my jokes. 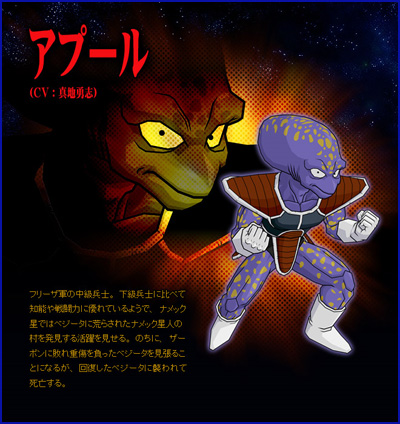 In 2008, TeamFourStar debuted their DBZ Abridged fan parody series. In the very first episode, Raditz makes an off-hand joke (after killing “The Farmer”): 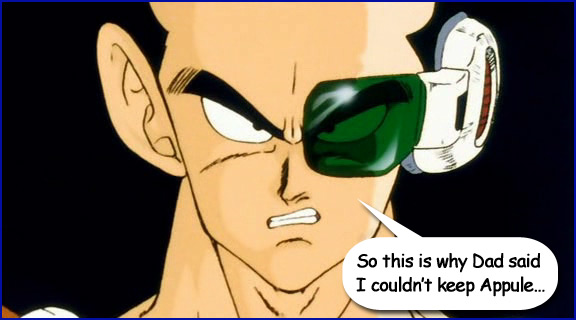 On Episode #0135 of our podcast, KaiserNeko confirmed for us that it was a reference to our recurring joke with the character, launching Appule to even further in-joke stardom.

MIKE: And I have to say, I guess I’ll interrupt you, ya’ know, how you’re describing the process, there are certain jokes that almost seem directly aimed at Meri and myself.

KAISER: You know, that might actually have to do with the fact that I am a hardcore listener of your show!

(a little later in the show)

MIKE: I have to ask, was there an Appule joke early in that episode?

LANI & KAISER: Yes there was!

MERI: I thought so!

MIKE: I didn’t hear it the first time. Meri was like, oh my god, they just made an Appule joke. I was like, really?

LANI: “So this was why Dad said I couldn’t keep Appule…”

MIKE: Yes! Ah, Appule, these guys are right up my alley!

KAISER: Actually, ya’ know, when we wrote that joke I was thinking of you.

KAISER: That’s mostly because, I thought he’s the ONLY person who’s going to get the joke!

That same year, I decided to pay tribute to my favorite, ridiculous, minor character in the series. I collected every single last bit of footage from the anime in which Appule appeared (including an episode during the Garlic Jr. filler arc where it seems like Vegeta kills an entire planet of Appule-esque characters), and tossed together a funny little trailer called “Dead In Two Episodes” in a couple hours. I did not end up using every last second of footage, but only because many of the scenes are just redundant shots of the exact same thing. For all intents and purposes, every scene of Appule appears in the trailer. I happened to finish the trailer in time for Anime Weekend Atlanta‘s “Professional” anime music video contest that year. It was nominated for “Best Trailer”, but I have to imagine it was only because there were so few trailers submitted to the contest.

In November 2008 on Episode #0152 of our podcast, our buddy Jeff asked us about character name puns that had not been “completed”. For example, the Jump Super Anime Tour special completed “Vegeta” with “Table” (using the entire word “vegetable” now to form two distinct name puns). For whatever reason, Appule’s name was brought up:

JEFF: Well, that kinda leads to the question, are there any other characters that haven’t filled out their pun yet?

JEFF: No, no, wait. I could say Appule… Appu… Paragas…

MIKE: He’s neither Saiya-jin nor vegetable.

MIKE: So Jeff, you want Appule and Paragas to fuse!

MERI: SOMEONE DRAW THIS!

MIKE: What is the resulting fusion name?

Within a week, that drawing existed. Our listener Tekkaman-James created “Appuragas” for all the world to see:

Just this year (2010), a new line of figures call “Freeza’s Force” has been seeing a release in Japan. While the first line contained the expected characters like Freeza himself and all of Ginyu-Tokusentai, the third line was set to contain Appule (along with plenty of other extremely minor henchmen). I was more than happy to place my order when he became available for purchase on Play-Asia! 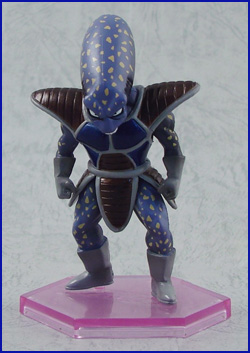 So that brings us all the way up through today. It may not seem it (especially after an action figure and even an appearance as a playable video game character), but there are plenty more places to take Appule. Hopefully we will see some more of him in the near future.

Long story short, The Farmer has nothing on Appule. We also certainly would not some kind of short manga explaining “Appuragas” and his origin story…

AUTHOR’S NOTE: This blog post was written in 2011, two years before Battle of Gods and four years before Dragon Ball Super. It’s a little rough around the edges in terms of writing, but I’m … [continue reading]