I was both anticipating (expecting, really) and dreading this day — today was the day that the “daizex” YouTube account was removed due to “copyright infringement”. What makes it so delicious is the “third strike” which resulted in the take-down:

One of our “Inconsistencies” videos. 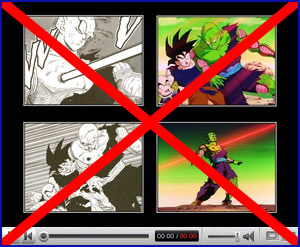 For those who are unfamiliar with them, over at Daizenshuu EX we created a series of (so far) three videos in our “Inconsistencies” line (itself a multimedia extension of our “Filler Guide“). In conjunction with a podcast episode (where we discussed the same topic matter among several hosts), we would create a short, narrated video that showcased the differences between the original manga (comic) version of a scene from DragonBall and its later TV adaptation. In our first video, we presented a scene where one character (Vegeta) sees another character’s transformed state (SSJ Goku) in the TV version, which never actually happened that way in the manga, and what the ramifications would be from this. In our second video, we presented a scene where the villain (Freeza and Dodoria) who murders a character (Cargo) is changed when adapted to the TV version. In our third video, we presented a scene in which there is a slight change in the order of events in a scene (Piccolo pushing Goku out of the way of a blast from Freeza).

In all three videos, panning and zooming shots from the original manga version are presented with original narration. A short clip from the corresponding TV episode (with subtitles of our own creation, since we are using the original Japanese version of the show) is played. To conclude, we recap with a couple more panning and zooming screen shots from both the manga and TV versions.

They are basically nerd-erific showcases of dedicated love for the franchise. While we have not quite seen anything exactly along the lines of what we created, other examples do exist out there — our buddy MistareFusion created a great video that has fun analyzing what appears to be a very intentional nod to Star Trek in one scene from the DragonBall Z TV series:

Are we using copyrighted works “without permission”…? Sure. Does that extend to even things like using music from the TV series, in addition to showcasing an actual scene from it? Absolutely. There is no delusion here.

The way that the Digital Millennium Copyright Act (DMCA) works is that if any kind of provider or host (let’s say YouTube) is notified by a rights holder (let’s say Toei Animation) that one of their works is being improperly used, stored, transmitted, etc., that provider or host must immediately remove or otherwise take down the infringing material. There is no review process until after the material is removed — if and only if the creator of said infringing material (let’s say me) chooses to file a counter-claim (in which they are saying that the material is not infringing, may actually be fair use, etc.). Basically, if you are notified to take something down… you take it down without question, or face further action. The rights holder faces no immediate repercussions for issuing take-down notices to content providers — this means they can issue take-down notices willy-nilly in blanket rollouts and hope for the best under the (safe) assumption that everything will be taken down with no argument. There is the potential for a horribly chilling effect on free speech when organizations hide behind the DMCA to remove legal commentary (for example, issuing a DMCA take-down notice on something they simply don’t like, rather than something genuinely infringing), but that is not the subject of this post, and not something I have enough familiarity with to authoritatively rant about.

YouTube works on their own personal “three strike” rule, whereby an account that receives three take-down notices from rights holders will be immediately deactivated. My main “daizex” account had received two notices of take-downs from YouTube regarding two prior videos:

We have disabled the following material as a result of a third-party notification from TOEI ANIMATION CO.,LTD. claiming that this material is infringing:

This is the third notification we have received alleging copyright infringement in one of your postings. Consequently, your account has been terminated.

If one of your postings has been misidentified as infringing, you may submit a counter-notification. Information about this process is in our Help Center.

Please note that there may be severe legal consequences for filing a false or bad-faith notice.

Were the first two claims pretty accurate? Sure. Does that diminish the accuracy or weight of the third claim? That’s up to you to decide. Personally, I think if anything is going to be called “fair use”, it is a video like one in our “Inconsistencies” series.

The Electronic Frontier Foundation (EFF) breaks down the area of fair use as such:

There are no clear-cut rules for deciding what’s fair use and there are no “automatic” classes of fair uses. Fair use is decided by a judge, on a case by case basis, after balancing the four factors listed in section 107 of the Copyright statute. The factors to be considered include:

(A-1) Was our video commercial in nature?
No. We were not enrolled in any revenue-sharing program via YouTube. We do not make any money off of Daizenshuu EX — while we do accept donations, any money received is put immediately back into the site for things like product reviews, hosting, etc. If you care to know, we’re in the hole. Always have been.

(A-2) Was our video educational in nature?
Maybe. While not a scholarly work in any way, an authoritative presentation of information could be considered “educational”. At the very least, it was “insightful”… or so we like to think ^_~.

(B) What was the nature of the copyrighted work?
Well, the copied work was creative (a fictional, animated TV series).

(C) What was the amount of copyrighted work used in relation to its larger whole?
Within our three-minute-and-sixteen-seconds video, the vast majority was original narration and still-shots from the manga and TV versions. Footage taken “verbatim” (for lack of a better phrase) plays between 0:30 and 1:26 (including fades in and out), meaning it is less than one minute in length, and less than one-third of the short video. As for an amount in “comparison” with the original product, are we comparing in relation to the one particular episode? An episode is roughly 22 minutes long. Are we comparing in relation to the entirety of the TV series? DragonBall Z is 291 episodes long, while its preceding and proceeding series have 153 and 64 episodes, respectively…

(D) What is the effect upon the potential market?
Our video is clearly not a substitute for the original product, in that we are constantly interrupting scenes with original narration and swiping them away to move onto the next point. We discuss roughly one minute or so of content from one TV episode of a long-running series. Furthermore, in this particular video we do not even discuss (never mind showcase) what is typically regarded as the most substantial and important “part” of the episode (Goku’s first SSJ transformation) — I personally think that is relevant to this fourth defense point, but you may disagree.

So where do we go from here?

I am not entirely sure. I think it is worth it to file a counter-claim with regard to this particular “Inconsistencies” video, but it is a lot of work for little value in return — which is exactly what the rights-holders are hoping for from an attitude out of those they issue take-down notices against. There is also the fact that some of the material on the channel as a whole was more legitimately “infringing”.

In the long run, though, I do not need YouTube to host these videos. I could just stream them myself on Daizenshuu EX all on my own! One of the reasons I put them up on YouTube, however, was — of course — the massive audience potential. We serve such a niche audience with our website that it can be difficult to find the right ways to reach out to and extend that audience. Our goal is simply to spread our love and enjoyment of the series (and specifically the original Japanese version of it), and a lot of fans out there just have no idea where to look for something like that. We have had plenty of new, regular visitors tell us they found us video YouTube, via our podcast listing in iTunes, via seeing us at conventions, etc. They are all great ways to reach out to that audience, so it made sense to explore that avenue.

The other side of me just wants to abandon it (YouTube being the “it”), though. We all know how ridiculous the comments are, and if we are not greatly expanding our audience there, then is it really worth it to keep producing for it? I am well aware (and have been constantly reminded), though, that the majority of people simply watch the video, smile, enjoy it, and move on with their lives. I consume media online in very much that same way. Positive feedback can be difficult to come by! While I joke that the negative feedback on the videos (from folks who generally are not our target audience to begin with) acts as a pretty huge hurdle to overcome in wanting to produce more, I recognize that plenty of folks out there actually do enjoy them and would not mind seeing more. With that in mind, I actually made a video showcasing the Bandai Playdia video game system exclusive to our Facebook page.

(Oh yeah… curious to see that “Inconsistencies” video that resulted in the channel take-down? I tossed it up over on our Facebook page. Enjoy! We’ll see how long that lasts!)

What Makes A Good Blog Entry?

I ask this question both of myself (to try and answer in an actual blog post… how fascinating!), and also of you all, dear readers. What does make a blog entry “good”…? One thing to … [continue reading]