Apple held a press event on that date announcing new developments in their iPhone and iPod line of products. Many were expecting an announcement of The Beatles finally coming to digital distribution (and exclusively through the iTunes Store), but a huge focus of the presentation ended up being on video games. Apple has dabbled in this before (particularly with their “funnest iPod ever” claims), but this time around they went for blood.

This would be entirely fine, except for the fact that they were misleading, occasionally flat-out wrong, and they deserve to be put in their place. Sure, I’m just some tool on the internet with a part-time video game blog. I even own every single system in question (DS, PSP, iPhone), so it doesn’t particularly affect me in any significant way. Still, I have a huge problem with intentionally misleading and misinforming people.

The entirety of the presentation is up for download from Apple as a video podcast in the iTunes Store. Any quotes and images used below are taken from this freely-available video.

When you think about it, the companies that have come before us… Nintendo and Sony with devices like the PSP and the DS… when these things came out, they seemed so cool. But once you play a game on the iPod Touch, you know… they don’t really stack up anymore! 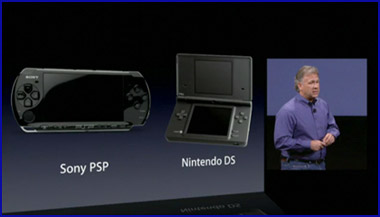 Came before you? They’re a part of the same generation. I suppose they came “first”, sure, but they are continuing with hardware revisions (DSi, PSPgo) and software upgrades at the same time Apple is continuing with the same thing. Hell, you could twist it around and say that the PSPgo is a newer system than the first-generation iPhone. What is that actually saying, though…? Not much.

And really? They don’t stack up anymore? It will be interesting to see how the iPhone version of Madden 10 does, especially when the PSP version is still getting pretty good reviews. While I hate to use it as a reference, the MetaCritic list of “best” DS games sure has a few that still “stack up”. Most notably is the power of Mario Kart DS, which sold another bazillion copies in July 2009… nearly four years after its original release.

One thing Apple conveniently forgot to mention is how games typically seen as “iPhone Games” are suddenly jumping ship to other platforms. Fieldrunners, one of the first, great tower-defense iPhone games, is hopping over to the PSP Mini catalog. In fact, the process of porting it over was “easy” according to the developer! Expect to see more from-the-iPhone ports in the future as developers build a base product and then turn their eyes elsewhere. You can easily argue that they build a significant and loyal audience on the iPhone with the original versions of the games, but there is an equally-important audience elsewhere they can cash in on, too.

They don’t have this amazing multitouch user interface. 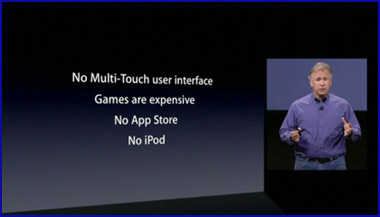 Certainly not false. Apple is absolutely right; neither the Nintendo DS or the PSP (or any hardware variation thereof) have a multitouch user interface. At the same time, let’s not forget who spearheaded most of the input schemes for controlling games, as well as feedback from those controls, into home console and portable gaming. Sure, they didn’t develop these technologies, but things like force-feedback (rumble packs), touch control (DS), motion control (Wii), system interoperability and connection (Gamecube+GBA, Wii+DS)… all pioneered and usually perfected by Nintendo.

I’m with ya’ on the PSP, though. The analog nub is pretty terrible.

Their games are kind of expensive.

Now when I say they’re expensive, we’re talking about 25, 30, 40 dollars for a title. A lot of kids can’t afford a lot of titles. I mean, you give one of those, you’re giving a need to spend a lot of money on those titles.

Yes, an at-launch retail game for the DS or PSP is going to be more expensive than the bottomed-out $0.99 price range for most “game and entertainment titles” (a phrase we’ll revisit) in Apple’s App Store. I don’t think too many people will dispute this. Of course, things like development costs, hardware manufacturing, licensing, etc. all contribute to the price. A physical product will typically cost more than a digital-distribution product. Again, not really lying, but certainly misleading.

By the way… how is giving someone an iPod Touch and telling them they can’t have any more games or apps any different from giving someone a DS and telling them they can’t have (or can’t afford) any more games? You’re somehow enabling and forcing someone to spend more money…? I… guess…? I don’t buy this argument for a second. It’s fluff, it’s ridiculous, and if anything, it shows that it takes far more products (more and more apps and games) to satiate their own iPod Touch gamer than it would a DS or PSP gamer.

They don’t even have anything like the App Store for finding great games and titles.

Here’s where things are changing, though, and where Apple is outright lying. Digital distribution helps to bring costs down. We’re not there yet, but many of the DSiware games and upcoming PSP Minis are not and will not be the same as a Tiger Woods game, either in content or cost.

Furthermore, the PSP has had a store since launch. It may not always have been as tightly integrated as it is now (requiring either a PS3 or a computer to purchase and manage software), but the PlayStation Store has certainly been there. The DSi launched with its own version of the Shop Channel, itself also included at launch with the Wii. DSiware games were available immediately, with a growing catalog of at least one game per week.

But worse isn’t the price, it’s the BUYING experience! Having to go a store and try to find the hot new game for one of those devices is not a lot of fun.

The buying experience on an iPod Touch is incredible; it’s truly breakthrough. Built into every iPod Touch is the App Store… can find access to all these 75,000 titles. It’s just incredible. If you look JUST at the gaming and entertainment category ALONE, you’re going to see a big difference. 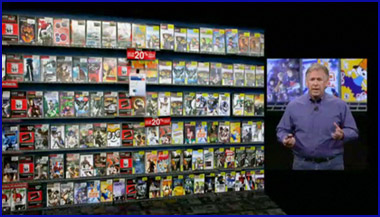 Let’s play a little game called, “How confusing is it to find something in the iTunes Store?”

First thing I did was go to the iTunes Store main page. I’m thinking, “OK, self… we want to buy a game. I own an iPod Touch. Surely, I will click ‘iPod Games’, right…?” 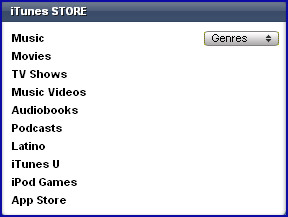 Of course not. That brings you to the iPod Click Wheel Games section, intended for the Nano and Classic series of iPods. Those of us who follow this kind of material know what it all means, sure… but picture someone who doesn’t. 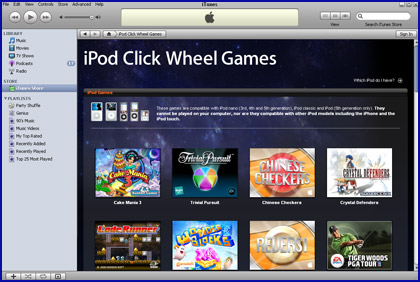 All right, fine; let’s go to App Store, instead. 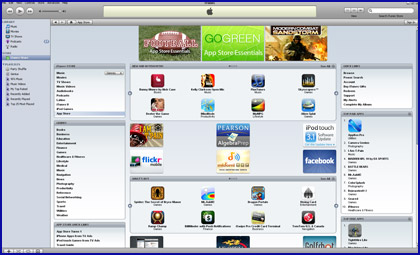 I’m struggling to understand how this looks like anything other than a digital version of the same GameStop store shelf Apple shows in their presentation. It’s overwhelming, it’s clunky, and it needs a lot of improvement. Sure, the iTunes Store has undergone some upgrades and clean-up since this particular version (shown through iTunes 8), but it’s hardly a convincing argument.

And they certainly don’t deliver a media experience like the iPod that’s built into the iPod Touch.

While it’s true that if you want to listen to music on the DS, it has always involved hacking the system and loading homebrew software. The PSP, on the other hand, has had integrated music and video support from the very start. RSS feeds can be added, allowing for podcast streaming right from the device. On top of all that, a web browser is included. The cross-media bar (XMB) isn’t always the most intuitive and streamlined interface, but for a while Sony actually marketed the device as a portable media device and a gaming console.

So I’m going to bring up a chart of the gaming and entertainment titles available on the Sony PSP, Nintendo DS, and iPhone OS. And here’s what it looks like: 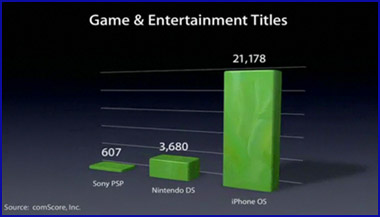 Whoa, whoa, whoa. Really? Did they seriously just try and spin this number in a positive light?

It doesn’t take a rocket scientist to see Sturgeon’s Law come into full effect here. If I stop to think about it, I will probably come up with a better ratio of “good” to “crap” games on the PSP than I would on the DS, and similarly from the DS to the iPhone OS. Of those 21K+ titles, how many are actually worth anything…? By “worth”, I don’t even necessarily mean “money”… I mean “time”. How many of them are worth even the time it takes to download them?

Here is where the “Game & Entertainment” moniker comes under fire. Apple is clearly piling anything and everything from fart soundboards to Madden under this sub-heading. The DS may have a ton of horrible shovelware, but I don’t see “iFart” on anything other than the iPhone OS. If you look at this statistic in any way other than a heat-of-the-moment, Apple-fanboy (or stockholder), mid-event set of beer goggles, you see just how ridiculous it is.

Now don’t get me wrong. I love my iPhone 3G, and I can’t get enough of Harbor Master (I just did 152 cargo deliveries on Cannon Beach, and am quite proud of myself). The games continue to get better and better, and I have been happy to even spend my money on a few of them.

Apple’s ego is getting a little too big, but that might be a good thing. Nintendo’s own ego has gone essentially unmatched in the handheld market since 1989, and it has only recently been under the force of genuine competition that all of the hardware manufacturers (Nintendo, Sony, and now Apple) have had to step up their game and innovate. Hopefully that means that everyone wins; games get better, hardware gets better, everything gets cheaper, and the variety of highly-engaging content on the “casual” and “hardcore” sides continue to grow.

But seriously, Apple…? You’re not there yet. You can wipe that shit-eating grin off your face.