Well, we’ve got a new Nintendo DS on the way (along with a few other things).

There has already been a bunch of discussion about the whole thingie-ma-bob, despite the press event only happening within the last 24 hours (as of this writing, Nintendo has yet to hold their US press event). However, there are a couple very specific things that I wanted to bring to everyone’s attention.

The first item of interest is the removal of Slot 2 (the GameBoy Advance slot) on the DSi. As you no doubt heard from episode two of our podcast, the issue of backwards compatibility is of both major interest and apathy among us (depending on the system, games, etc.). A huge point we brought up was that Activision’s Guitar Hero: On Tour, as well as the upcoming On Tour Decades on November 18th, rely(ies) on Slot 2 to house and interact with the guitar frets attachment. Needless to say, these games will (theoretically) be completely unusable with the DSi.  I suppose it’s a good thing for Activision that they already got their Guitar Hero: On Tour & DS bundle out the door earlier this year, because that thing is looking more and more irrelevant as information comes out of Nintendo today.

This is yet another example supporting my personal belief that Nintendo has been one step behind where they should be with regards to… well, everything… since the Gamecube. I know, blasphemy, especially considering all the profit they are raking in. Hold on.

Microsoft realized and made it clear back with the original Xbox that digital distribution was going to be huge for conoles (even if you missed all of the other signs out there), but Nintendo really had no foresight for this. The Wii’s internal space was limited to microscopic levels (more on this in a bit), and the DS had Slot 2 to play actual GBA games.

Of course, you have to consider Nintendo’s approach during the DS’s launch. To them, it was their “third pillar” (main console / GameBoy line / the new DS). For the time, it was a brilliant move; if the DS failed, well, that wasn’t meant to be a replacement for the GameBoy line (right… with it having the GBA slot, and all), so no big loss! Luckily for them, the DS has become a global phenomenon. That Slot 2 is where it gets tricky, though. Would the (original) DS have taken off without it? Keep in mind that nearly every late GBA game was coming with little pamphlets showing you how you would be able to play them on a DS in a whole new light, so to speak. 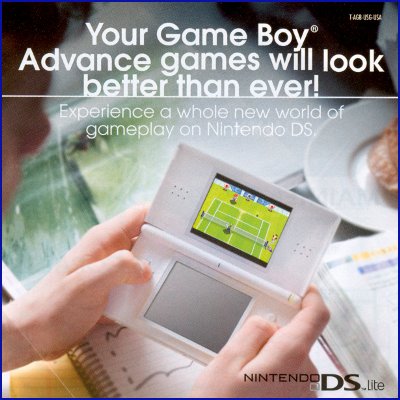 My point is that if Nintendo really wanted to crank up the digital distribution and sell us GB/GBC/GBA games directly for our new DS, they should have cut Slot 2 out of the DS Lite. The DS was already popular, but the DS Lite is what really… how do I put this… oh, just insert an “it prints money” joke here. Now we have that device in what appears to be every-other-person’s hands no matter where you look, and the GBA slot is right there with them. I’m pulling some Wikipedia-research on you right now, but the numbers look like ~80 million GBAs, and ~77 DSes (so far). That means that there’s already a huge crossover with DS owners that probably have a nice little GBA game library kicking around somewhere. I’ve mentioned this on the show plenty of times: why would I re-pay for a game on a new format when I have the original cartridge sitting right over there?

Of course, there are plenty of reasons (as seen by my constant purchases of Super Mario Bros. and The Legend of Zelda games) with convenience and portability being the main ones. Nintendo is really going to have to prove to these millions upon millions of potential customers exactly why they need to re-pay for Super Mario World: Super Mario Advance 2 (on top of already paying for the original SNES version on Virtual Console, on top of still having the cartridge sitting in their Super Nintendo). Price is going to be a key factor, and one that I do not feel they have been particularly persuasive with. We know the DSi digital distribution pricing scheme will be between about $2 and $10, but there is no further clarification on what will be sold and for what price level.

How does Pokémon play into this, by the way? A huge deal with Diamond & Pearl was the fact that you could put all of your Generation III games (FireRed / LeafGreen / Ruby / Sapphire / Emerald) into Slot 2 and do all sorts of neat things (transfer the critters via Pal Park, mostly). How about future games? How are we going to be expected to transfer from Generation IV to Generation V? Will we need two DS systems?

That also brings to mind what I call Nintendo’s “tethering” to the DS. If you play certain games (and especially if you go online with those games), you will notice that the games tell you that your system and game are being considered a single entity now, and will need to be used together exclusively. For the most part, this presents no problems other than ending up with a new friend code if you decide to upgrade from a DS to a DS Lite, for example. For games like Pokémon, though, it gets a little more difficult. I actually do not know the full extent of it, so perhaps you all can help me. What are the ramifications for taking a Generation IV game to a new system? If I start playing it on a DS Lite instead of my old DS, will My Pokémon Ranch recognize that it is still the same game? Will I be locked out of transferring back my little guys? It may not be the same system + game combo, but gosh darn it, it is still the same cartridge!

Finishing off my backwards compatibility ranting and raving is the whole idea of the “Wii de Asobu” (Play On/For Wii) series. Just like Capcom did with Resident Evil 4, but actually applying a brand to it, Nintendo is going to re-releasing a bunch of Gamecube games with enhanced Wii-specific controls. You don’t get to play a new Pikmin game, but you sure get to play the old one… with Wii controls! In all honesty, this actually sounds like it could be pretty interesting. Metroid Prime fans are probably salivating at the thought of re-playing the first two games with the Prime controls. Imagine going back and playing Wind Waker with the Wii’s Twilight Princess controls; while they may not have been as necessary or appropriate as the Metroid Prime control evolution, going back to non-Wiimote+Nunchuck for Zelda can be a little off-putting. This is pretty ingenious on Nintendo’s part, in that they (once again) get to charge you (once again) for playing the exact same game (once again) only slightly differently.

You will notice I am ignoring all the things like the internal cameras, further embellishing on the SD card slot, downloadable web browser, music playing, etc. These are all the expected next-steps for Nintendo, and I honestly just do not have a lot to say about any of them.

The last thing I did want to address is Nintendo’s admission that there is insignificant storage space available on the Wii, and that they will be utilizing the SD card slot to solve this problem in Spring 2009. I have spoken before about my experiences with having to clear out the fridge, so I will not bother going into it in-depth again. It would not surprise me if it was Nintendo’s arrogance that got them into this situation, though. They honestly believed that there would not be any storage problem, and they honestly believed that moving things to and from (rather than executing directly off of) an SD card was sufficient. That would be perfectly fine… if they weren’t also selling us Nintendo 64 games, Turbo-CD games, and WiiWare games. Especially with the latter, it was probably quite shocking for them to realize that the less-than-512 MB really isn’t enough to actively use the system for what they’re now intending it to be used for. The SD card slot is really the most simple solution, and I am thoroughly glad (and relieved) to see them utilize what is actually right there inside the system, rather than pushing more useless white plastic our way.

So what about you all? What are your thoughts on everything? It was certainly a lot to wake up to this morning, that’s for sure.

Not wanting to seem entirely biased in one direction (though it’s mostly true), it looks like I have to cough up a little disappointment due to the fact that in-game content and DLC for The … [continue reading]

Hey, all. I’m back! I have a lot to talk about on whatever (and whenever) the next podcast is about gaming on a honeymoon, but until then, it’s business as usual for me. (That basically … [continue reading]

So today, Ys I & II came out on the Virtual Console. I’ve always wanted to check out this series, and never bothered to do so (either through emulation, or actually picking up a damn … [continue reading]