I briefly hinted a couple days ago that I was going to have some more Neo-Geo/SNK action coming your way, and so here it is…!

You have probably heard on the show our little story about the Neo-Geo Pocket Color. If not, the short version is that Andrew picked one up our senior year of high school (1999-2000), and suddenly it became a little cult hit in our area. At least half a dozen people seemed to have one within the next week, which… if I’m doing my math correctly… accounts for at least 98% of the installed base of the system, in total, globally.

We all played the crap out that little system and its games. Remember that at this time, the newest handheld we had going for us was… what?… the GameBoy Color…? The GBA wouldn’t see a release for another two years or so, and before the NGPC, we were trading Pokeymanz (yes, seniors in high school were playing that game… in calculus) and not a whole lot else.

I actually didn’t pick up the system right away, for whatever reason. I guess I just played Andrew’s constantly. Needless to say, the system didn’t last all that long, and it soon became very cheap and very unheard-of. I finally picked up my own system the following year during my freshman year of college. If I remember correctly, every couple of months Amazon was getting in some overstock that they were selling off at a bargain price. I believe that I grabbed the system (packed in with Sonic the Hedgehog: Pocket Adventure) for $30. Not a bad deal!

Since then, the system has mostly sat in its box over on my shelf, with the occasional break-out to show wide-eyed friends a handheld console that they had never seen before in their lives. As much as we loved the darn thing for the few months that it was the new-hotness, that love seemed to mostly be in memory and not quite in practice.

One of the games that we played the Hell out of, though, was (and this should be no surprise if you’ve been following along with us) SNK vs Capcom: Match of the Millennium. Being the actual first game in the SvC/CvS series, it was quite a novelty! The controls were spot on, the dialog was hilarious, the unlockables were wonderful, the music was amazing… it’s shocking to me that they didn’t port this over to GBA! 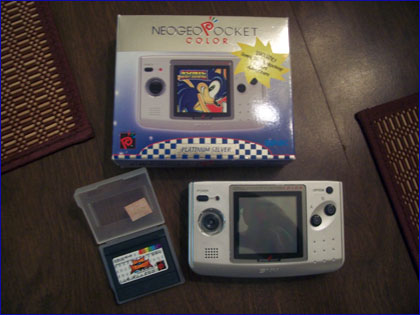 Well, I finally picked up my own copy of the game at Anime Weekend Atlanta last month. It cost me $30 (omglolz price I paid for the system), but I don’t have to iron out my plan to steal it from Andrew, anymore.

It was quite a trip playing an old favorite like this game. It’s one of those games that you continue to quote long into your adult life (for example, “Gwwwaaa! I can’t stop me!” and “It’s Mai Time!” are NGPC staples). While I thoroughly enjoyed getting back into it, the DS and PSP (especially the DS Lite and PSP-2000) have really spoiled us all when it comes to handheld screens. It’s better than the old GameBoy systems, but unless you’re in perfect lighting, it’s damn well near impossible to see what you’re doing. It doesn’t do the actual graphics any justice, and that’s such a shame. I’d love a DS port of this little bugger… so long as I can also get one of those little clicky, faux-analog nubs to place over my d-pad, as well…

The art style of Street Fighter IV is definitely something to write home about, but all of us above the age of 20 were still halfway sad to see the (numbered part of the) series … [continue reading]