Wow! Thanks for the overwhelmingly positive response to the first episode of our podcast, everyone! That really makes me look even more forward to recording and releasing the second episode. Until then, look forward to some regular blog postings (kinda like this one), and maybe even a couple other special things here and there.

Speaking of podcasts, our addition to the iTunes Store was certainly quick. It should be searchable in the iTunes Store within a day or so, but until then, you can access us directly where you can do the one-click subscription. We have all sorts of subscription information over on our “Podcasts” page. Remember that you don’t need to have an iPod (or any portable music device) to check out our show. You can download the episodes and listen in anything like WinAmp or even Windows Media Player; they’re just straight-up MP3 files!

So today I finally became one of the fabeled “geeks and otaku”. That’s right, I ran out of storage space on my Wii. Thanks to some birthday VIrtual Space Money from a certain Mr. Deluxe, I decided to go on a mini-spending-spree in the Wii Shop Channel. Much to my dismay, I could not so much as download an SNES game without making room. The “Mario Kart Channel” was the first to go, followed by the “Internet Channel” (seriously, is anyone using either of those?). I wanted to delete the “Photo Channel”, but I have a sneaking suspision that I have to download the updated version from the store before I can see it for deletion in the memory management. Once space was made, in came some Devil’s Crush, Metroid, and Super Metroid… the middle-which of said games being the only one I’ve ever owned and/or played. I know, I’m terrible. Never played Super Metroid. I’ll get right on that. Eventually.

How many of you are running into this problem, though? Or is it not even a problem for you? I really want to check out Lost Winds, as well… but that’s not happening any time soon unless Nintendo has some sort of announcement around the corner. We’re all on pins-and-needles since Activision formally announced full downoadable content for the Wii version of Guitar Hero: World Tour, supposedly making use of the SD Card slot. For goodness sake, can I please toss some of these useless channels over there so I can spend my money with you? Seriously. I have Wii points to spend. They’re sitting right there. I’ll even spend more to add more points if you just let me keep everything I download all in once place. That’s the whole beauty and convenience of it.

I know, that’s a pretty broken-record tirade, so I’ll leave you with the following: 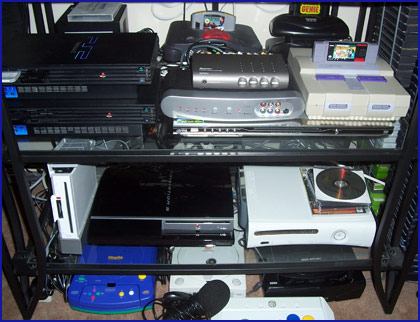 Yep, the PlayStation 3 has joined the family. Had to get a component-input-switcher to have everything play nice and be hooked up at once. Big special thanks to an awesome buddy out in California. You rock, man. Was doing some Remote Play with DragonBall: Final Bout, and reminded myself how terrible it is :P.

Hey, all. I’m back! I have a lot to talk about on whatever (and whenever) the next podcast is about gaming on a honeymoon, but until then, it’s business as usual for me. (That basically … [continue reading]

It seems I don’t exactly have the best luck with video game hardware lately. My 360’s USB ports seem to be on the fritz, my Wii has graphical glitches that seem to stem from WiiConnect24 … [continue reading]

Just because a new podcast episode came out yesterday, it doesn’t mean that I can’t keep writing blog entries! I’m still here for another couple days! We heard about it hitting the Japanese Virtual Console … [continue reading]