Longtime Akira Toriyama fan. Playing Chrono Trigger fifteen years late. Check. In theory, I like Japanese role-playing games, but ultimately do not finish the vast majority of ones that I actually start. Gotcha. All caught up? Let’s talk about the game, now! 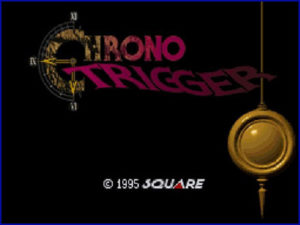 The following discussion will be filed under “Video Game Club” and placed behind a cut to prevent inadvertently spoiling the game for those who have not yet played it. You would think there would have to be a statute of limitations for games this old and discussions like this, but since someone like me is only just now getting to the game, I will be kind to the others who also hold their heads in shame!

I feel as if I have played enough Japanese-created RPGs from Chrono Trigger‘s era (and slightly beyond into the early-to-mid 32-bit days) that I went into this game with a solid expectation of what the “norm” was for the time. While I have only dabbled into some of the modern offerings, and truly have no solid base of context and understanding about where the genre has gone, I am vaguely aware on at least a high level as to what the current norms may be. With my own, very individualized frame of reference, these are seven things that have absolutely blown me away in the first ten hours of game play.

CAUSE AND EFFECT
As I alluded to when I first posted after beginning the game, Chrono Trigger does a fantastic job in showing how the world is affected by events in the past and future. One need look no further than Marle disappearing after Queen Leene is kidnapped, bringing flashbacks to Back to the Future and Marty’s disappearing siblings, as a prime example of this. It is not just the events that you interact with as your playable characters, though — the history of the land oozes rich cultural goodness in every age. I am so glad that I discovered the prehistoric celebration side-area within Leene’s Square before actually adventuring off into the past. Little hints like this really drive home the point that these are not separate worlds — they are one, singular world held together by a thin fabric of time. 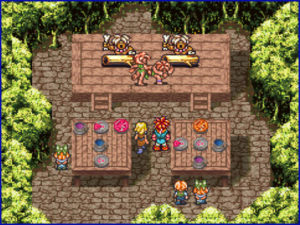 (prehistoric dancing at the festival)

MUSIC
Yasunori Mitsuda’s score is well-loved for a reason. Very few games pull off the leitmotif concept as well as what I hear in this game. It is not just that each character has their own, individual theme that perfectly embodies every single one of their traits; it is equally about the music of the world itself, which changes through the ages and yet is still instantly recognizable as the same music. I am beside myself with love for Robo’s theme (even ignoring the Rick Astley comparisons), Johnny’s theme was as catchy as any standard pop song, and Gato/Gonzalez’s yelping tune makes me laugh every time.

CHARACTER ANIMATION
It is absolutely true that all of the characters of Final Fantasy VI are impeccably detailed and express a huge range of emotions, and probably more so than here in Chrono Trigger. Despite that, I feel as if this set of characters is even more well-defined and expressive. Whereas FFVI lost me with its ridiculously large cast of characters (something I otherwise love, such as the ensemble casts in shonen stories), bringing it back to a core, manageable group lets me really pay attention to each of them. Combine the amazing sprite-work with the musical motifs, and I feel as if I already have a decade’s worth of familiarity with them. Crono’s “Yes!” arm motions, Marle’s jumping-for-joy, Frog’s bowing… these are real characters to me. I believe them in-so-much as I believe that they truly exist in this world that I am playing.

CHARACTER DESIGN
I will be the first to admit that Akira Toriyama’s character designs are recycled nonsense to a stupid degree. Everyone either looks like Gohan or Trunks if they are male, and Bulma or Lunch if they are female. You could legitimately take it further back and say that even those character designs are just recycled from Dr. Slump! Ayla looks like Lunch running around like a dog-woman, while Lucca looks like Arale grown-up a little bit. Despite this, somehow Chrono Trigger‘s characters have a little more character to them than those I have seen from him in recent years.

Long before ever playing the game, just from seeing its advertisements and being aware of its existence, I felt that Crono himself had a very distinct look to him. Even with all of the Dragon Quest characters that have come and gone, Crono’s silhouette and color scheme are all his own.

MOOD AND ATMOSPHERE
The musical score is certainly a part of setting this up, but a whole slew of other aspects that are difficult to pinpoint or otherwise put into words are truly selling me on the world and the dire situation it is in. 2300 AD looks devastated — the design of the buildings and ruined land, the white flashes that crack across your display, the bundled-up children that whine of hunger, the Enertron going so far as to tell you that you are still hungry… all of this combines together to create a world that I do not want to be in. As intrigued as I am by this future, I am disgusted every time I visit it. To have this sort of reaction, and to the world of a 16-bit game, really tells me a lot about the experience I am having. 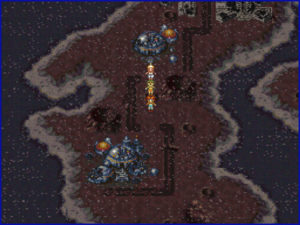 (the team arrives in the future)

My love of the game’s atmosphere was brought to a new level just as I completed this first ten hours in my raid of the Fiendlord’s Keep. The lack of any music what-so-ever at first actually put me on edge. Creepy children laughing scares the bejeezus out of me. My own comrades turning into battling monsters actually made me wary of seeing them “for real” the next time. Even with Ozzie being ridiculous and over-the-top with his laughable battle plans and inability to catch his breath, the entire area made me frightened. When this culminates in two fascinating boss battles and then an even Bigger Bad boss battle, you know that someone put more love into this one scenario than some games ever get in total.

BATTLE SYSTEM
Sometimes I want to sit around and endlessly stat-grind with the best of them. When I want that, I will play Pokemon. For the most part, I am beyond that in what I am looking for in my general gaming experiences, though. No random encounters? Enemies that move around the screen? Dual- and triple tech moves? Individualized magic systems per character? All of this wrapped up in something that is easy to understand and implement? Where have I been for the last fifteen years…?! 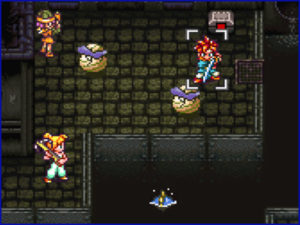 (battling in the sewers)

PACING
Even with the battle system the way it is, if you want to grind, you can grind. Go out and back in to certain areas, get ready for the sequenced-ambushes, and fight the same enemies over and over to your heart’s content. That’s fine. What really makes the game’s pacing so beautiful, however, is how it encourages you not to do this. Without the random enemy encounters, you feel no apprehension as you explore the world map. It is a living and breathing world with a lot to offer in terms of exploration, other characters, hidden treasures, and more. I have never once felt that the game was pushing me, kicking and screaming, to move on to the “next” part of the story. I was free to roam, and yet the world is not so huge that I feel overwhelmed while doing so, and never do I lose track of what the current series of events are, what my next goal is, and why I am doing it.

Needless to say, I am pretty blown away by Chrono Trigger so far. I know that I have a lot to look forward to (especially the multiple endings), and I can see this sticking around in my DS for quite some time to come. My biggest fear is that the game has already blown its proverbial load, and I have already experienced the best of what it has to offer. I am pretty optimistic, though, and I am 100% on-board with the rest of you when I say, “Mike… it’s about damn time.“

I figured it out! I know what my biggest problem with RPGs is; despite wanting to love them so much and continue picking them up time and time again, I have so many issues! Town … [continue reading]

Perhaps contrary to popular belief, I am indeed slowly making my way through some games. They may be the same ol’ games, but I’m making progress, none-the-less! I got in a little more playtime with … [continue reading]