I have written in the past about how Apple can be pompous with their public image surrounding games. I have also written in the past about the “bottomed-out” level of pricing for iPhone games, and how game developers (specifically the big-name, established ones) have struggled to adapt to and create for a platform where just a couple bucks is somehow seen as “too expensive”. I do think there is a place for “higher”-priced games on the iPhone (that is to say “higher than $1”), but I do agree that the expectation of the price and its respective deliverable is nowhere near its DS and PSP brethren. It is a completely different model where even the big guys have to think like an indie developer.

That all being said, I wanted to share a few games that I have purchased for my iPhone that I regularly return to and genuinely feel are worth the price — regardless of the developer type. These are not fun little applications that you load up once or twice, show off to someone, and never return to again. These are not applications that you pay 99-cents for and feel you got your 99-cents worth of value after a couple days. These are games that take full advantage of the platform they are on, and over-deliver on their value. Picking up any of these is a no-brainer. I present them to you in an order that somewhat resembles my feelings on that value compared with their price compared with how much time I have actually sunk into them. 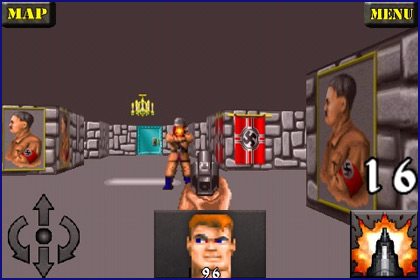 I played my fair share of Wolfenstein and Doom back during their original PC release just as much as the next kid. I was never super-into these grand-daddies of the modern FPS (back when the only term was “Doom-clone”), unfortunately, so I could not tell you just how faithful the port is based on my own experience. When you consider that John Carmack worked on it himself, though, I have full-faith this this is how it was intended to look and be played. The control scheme takes quite a bit of adjustment before you start cruising around — it uses a virtual control pad in the bottom-left like many games. Since it was always a very “2D” game with no real strafing in the first place, however, it carries over quite well once your thumb gets used to how it should nimbly and minutely slide back and forth. I have played it more than I thought I would, though I will admit that the sheer curiosity factor of playing Wolfenstein 3D on my phone carries as much weight as it does for simply being good. 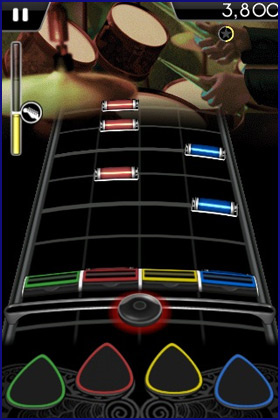 I disagree whole-heartedly with my buddy Bob over at The Appcast. Back on episode 39 of their show, a battle between Rock Band and Tap Tap Revenge 3 (then still a paid app) concluded with my choice as the loser. This could not be more wrong. Whereas Bob liked all of the avatar customization and modes in TTR3 and disliked the “vocals” part of Rock Band, I have had nothing but terrible experiences with the cruft of TTR3 getting in the way of enjoying it. Earnings credits to unlock songs that are totally different from paying (with real money) for them is not as direct as Rock Band‘s simple “beat this playlist and get the mystery song” setup, which (while it is terribly antiquated) just works. The bazillion things on-screen in TTR3 leaves me confused as to what I actually selected — it’s a MySpace-esque assault of terrible design aesthetics. It is slow. It is unresponsive in the menus. Its business model of paid downloads literally gets in the way of me trying to do anything when it takes up 60-70% of the screen. 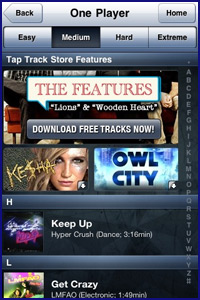 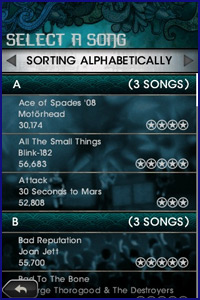 I may sound like a fanboy, but that’s fine. Harmonix knows what they are doing, and I am fully on board with them. Rock Band is fast. It is minimalistic and yet retains its distinctive look. It is organized. If you are into downloadable content, it is cheap — two (bundled) songs run you a mere 99-cents, a huge discount from the $2-per-song price point that is standard on the consoles, and (unfortunately) even carried over to the PSP’s Rock Band Unplugged store. It is true that this game does not have the huge variety and raw number of  songs available in the Tap Tap Revenge series, but you have to ask yourself which type of game play experience is more your style: do you want random taps that could follow any variety of musical qualities of the song (TTR), or do you want instrument-specific patterns (RB)? 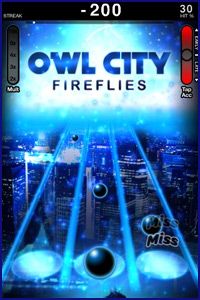 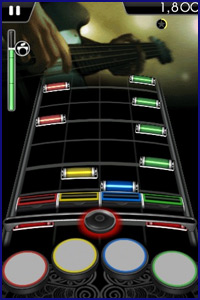 For me, the choice of a music game was clear. I paid the full launch price the day it was released, and while I do think it settled down to a more appropriate $6.99 since then, I do not “regret” my purchase in any way. When I am itching for a little drum action on the train ride home, Rock Band for the iPhone has me covered until I can burst through the door to my ION drum kit. That is the main “problem” with this iPhone version, though — when the full experience is waiting for me at home, the only time I ever play the portable version is during commutes. I cannot see myself sitting in my living room playing the iPhone version when I could get up and belt my little heart out. It is what you make of it, though; if you do not have the cash to drop on the full version, skip a couple cups of coffee and get the portable one.

For the record, I have no problem with the “vocals” portion of the game — I never expected to actually be singing into my phone, so while it would have been a “nice-to-have”, I do not feel any major loss with having to trace my finger up and down the pitch, instead. No, the performers cannot be customized like their cousins on the consoles, and no, they do not perfectly move in sync with the music. None of these things affect the base game play, though, which is the most important thing to get right in an iPhone game. 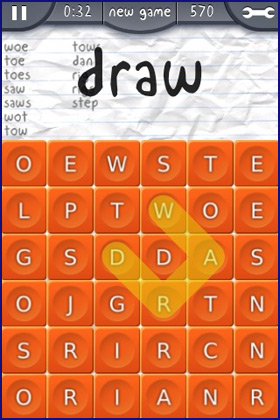 As one of the first games I picked up, wurdle certainly deserves a spot on the list. It’s simple, really — a bunch of letters are randomly boggled around in a grid, and you have to draw lines across the letters to form words. More than any other iPhone game, this is the one that I have seen groups of people get involved with (including a train conductor who stood behind us and called out a couple words). It is one of the best two-minute diversions you can find and you will lose more time with it than you choose to admit. There is always something to be said for simplicity, and wurdle hits a home run in that respect. What more can you say? 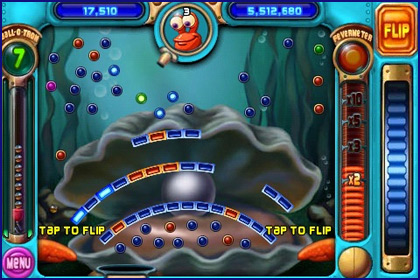 Depending on how how addicted you already are, even the $4.99 original asking price may have been a steal. The price has fluctuated all over the place since then, but it is well worth it no matter what the cost is at any given time. While I only dabbled in the game on the PC and did honestly enjoy it, this ultra-portable version of the game is exactly how I wanted to play. The wheel on the right-side to pinpoint your exact angle was a great way to compensate for the lack of mouse control. The colorful design looks fantastic on the iPhone’s screen. It runs beautifully, even zooming in to slow-motion with “Ode To Joy” as you hit your last block. It is the culmination of every bit of “casual” PC gaming since Minesweeper, all wrapped up in an absurd and irreverent aesthetic. 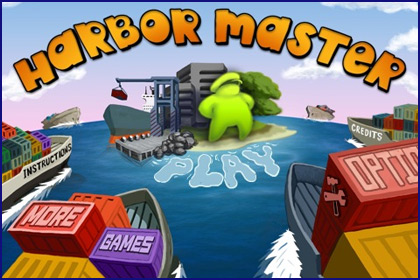 The “line-drawing” genre is one that has exploded on the iPhone. I initially saw Flight Control and thought it looked neat, but for whatever reason, Harbor Master was the one that grabbed enough of my attention to warrant a purchase. It is clear that my favorite games on the platform are the ones that take their simplicity and work feats of genius with a single, underlying concept — Harbor Master is no exception. You have a boat, you have a dock. Draw a line for the boat to empty its cargo at the dock, and draw a line for the boat to leave. Oh, but watch out for the boats hitting each other. Oh, and watch out for putting the orange and purple cargo in the right places. Oh, and on this stage, watch out for the pirate ships. Oh, and on this stage, take advantage of the fast-unloading dock but also watch out for the monster. 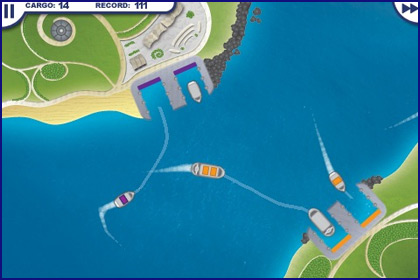 I have sunk more time into Harbor Master than any other application on my iPhone, most likely — yes, that includes Safari and various Twitter apps. Every other day I seem to hit a new high score on a stage, which drives me to want to play it even more. How fascinating is that? A game-lengthening tactic from the industry’s infancy (“beat a high score”) is what brings me back to this game. It is not about unlocking new stages. It is not about unlocking new boats. It is not about multiplayer (though that is also there). It is about the game doing the one thing that it does so well, assigning an obvious 1-point rating to each successful delivery, and making me want to get “just one more” each time. And everyone loves the tropical music that plays, too!

How about you all?

There are plenty of other games that are worth checking out. I still have not grabbed Canabalt, for example, and I know that Spider: The Secret of Bryce Manor is worth a look. One of the earliest games, Fieldrunners, still has not made its way to my phone. I also can’t wait for the port of Plants vs. Zombies. How about you all? Which iPhone / iPod Touch games have you grabbed that you feel are more than worth the price of entry? How do you convince people (like our own buddy Andrew, who refuses to pay for a single iPhone app) that some of these are actually worth paying a buck or so for?

Technically it’s not my first Rock Band casualty, since the whammy-bar on my guitar is busted… but that’s not really essential for gameplay. Last night I was playing some good ol’ Foo Fighters songs on … [continue reading]