I have never really been a big PC gamer. Other than some SimCity 2000 and Castles II: Siege and Conquest back in the Mac OS 7 days and a little bit of the first Sims, I have been almost exclusively a console-based gamer (including portable systems) my whole life. I suppose the only “reason” was that I never really got into FPS games (as detailed here and here on the blog), and that was all I saw on other folks’ PCs all throughout college (specifically Unreal and Counter-Strike).

It was not until 2007 that I suddenly had even the faintest hints of interest in gaming on a computer again. Working with computers all day for work-work and hobby-work, it was generally not my preferred location to game, but I could not avoid the growing hype surrounding The Orange Box. Sure, the Team Fortress 2 character introduction videos were hilarious and I might as well test that out… and sure, Half-Life 2 was apparently some hugely-loved game that now had two extra “episodes”…

It really was just Portal that pulled me in, all on its own. Ignoring the humor and ignoring the setting, the idea of a puzzle game veiled behind the appearance of a first-person shooter intrigued me beyond belief. I have talked at length about my experience with that game on the podcast and here on the blog, so let us fast-forward to today’s random PC gaming fascination. 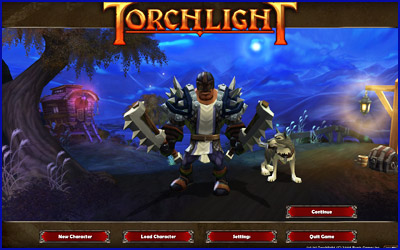 After hearing it get endlessly praised on podcasts like Gamers With Jobs, and even from my buddy Bryce, a half-price $10 Torchlight steal on Steam sounded like a good idea.

Based on how I began this entry, it probably goes without saying that I have absolutely zero familiarity with any kind of Diablo game, clone or otherwise. The entire genre of the action/adventure/RPG “click-fest” is entirely foreign to me. You may remember my first attempt at playing an MMO lasting all of five minutes or so. Even knowing that going in, I figured that with people whose opinions I respected and resonated with all enjoying the game, I should at least give it the ol’ college try.

I have put just under two hours into the game, and my most recent achievement is “Over The Brink“… there was something about some guy being turned into an evil monster by some other guy down underground and returning to town to talk with some woman about me being corrupted. I think. I’m not entirely sure. I think I’m at level five…? And opened up a bigger (permanent?) portal back to town…? 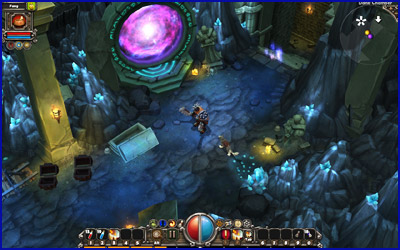 It has taken me this entire play time to figure out most of what is going on, how to change character attributes, how to enchant items, and how that all fits together. Some of it I picked up on quickly — the number keys correspond to items to use such as refilling my health or mana, for example. Click somewhere to go there. Click something to attack it. All of that is pretty simple. Other aspects have been hidden away, waiting for my mind to wrap itself around the game as a whole before I can even begin to understand what they mean. I am successfully sending my dog to town to sell off extra items. I am upgrading my strength and special attacks. I am identifying items I find underground and having that wizard in town enchant them (at a cost, of course!) to allow for better statistics and open slots. I am talking to the horse at the front of the town every time I return in hopes that it will bestow some sort of wisdom upon me.

There is just a lot of “stuff” to click on; it is a little overwhelming. It is certainly not the most complex game ever (higher numbers are generally better than lower numbers), but there is a lot to take in, especially so if the entire genre and presentation is entirely new to you, as it is to me. 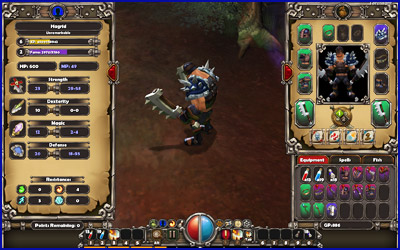 I am enjoying myself so far, though. My character (Hagrid) is a “Destroyer” class, and he has a dog (Fang). I am still figuring out this whole “fame” thing, all the extra techniques, skills, and items that are available to me, not hoarding items since I have a limited number of slots in my inventory (even with the chest in town)…

There is a lot going on, but so far it seems to have the perfect balance of drop-in/drop-out game play that I am looking for while at the PC (the floors of the dungeon are just the right length), and the single-player experience is what I crave for this type of universe (though I hear an MMO is in the works). Have you tried out the game? Do you have any familiarity with this type of game at all, and how has it shaped your experience? Do you know of any resources for a newbie like me to read up on it all?