It is certainly a fair question to ask why I would need to own three PS2s in the same house. What kind of setup could possibly require this? We certainly never intended to have three, but our logic for doing so may be sounder than even I originally thought.

It started out with the original PS2. While I did not get it immediately after launch, it was soon enough into its lifespan that it is the original launch model. This has been one of the most-used consoles in my lifetime, with a gaming library (both in terms of global releases and my own personal collection) that exceeds anything that has come before.

Since I had little interest in modding my system to play Japanese games (and genuinely having zero interest in bootlegging or “playing backups”), I opted to go with a genuine Japanese PS2 to supplement the American one. I ended up getting a Hell of a deal on one (yet another launch model) from a fellow staff member at AnimeNEXT many years back, just in time for the Japanese release of DragonBall Z 3 (“Budokai 3”). It served me quite well over the years, allowing me to play my precious DBZ games with both their Japanese voices and music… not to mention cheap, English-language “Asian versions” of games (Tekken 5), and plenty of other fighting games that either never came out here, or came out years later (Neo-Geo Fighting Coliseum, Virtua Fighter 2 [Sega Ages version]), etc.

So here we are in the present-day. At the end of last March I asked you all whether or not the PS2’s $99 price drop affected you in any way. Would you get a new system to replace a broken one? Supplement the first one for use in a different room of the house? Maybe even get your first PS2 ever? The comments seemed to run the gamut of all those scenarios, but none of them really applied to me at the time.

Here I am in the new house, though, with plenty of rooms, plenty of TVs, plenty of newer systems and games… and yet a desire to still play some PS2 games from time to time, both classics that we also break out to play, as well as games I just never got around to playing.

Originally, I set it up so that the two PS2s (American and Japanese) were hooked up to my old TV via component up in our loft. This was an easy and convenient way to still let me play some PS2 games since our PS3 model (the 40 GB mass market one) does not have backwards compatibility.

However, as convenient as this was, it posed a few problems. For starters, it would now be impossible to play Dance Dance Revolution. While there might be enough room up in the loft… really, no-one needs to be stomping around up here. Also, while it’s nice and comfy up here with a couch, it is not quite the same as wirelessly playing games down on the new HDTV in the living room. We enjoy playing some old favorites when company is over (namely Capcom vs SNK 2, Street Fighter Alpha 3, etc.)… and while we do have newer games available to us that will eventually become staples, it really isn’t that much fun to say “Forget the nice, big TV with surround sound… let’s go play up in the loft.”

When we received our entire security deposit back from the apartment folks (which we did not anticipate at all due to the cats taking a loving to picking at several areas of carpet and molding), we quickly decided that getting a slim PS2 to hook up to the HDTV in the living room was no longer “overboard”. Here is the current PS2 setup we have throughout the house:

The Japanese PS2 remains in the same place. The majority of play-time the system sees is typically single-player DBZ games on my own, so there is no problem just crashing up on the couch in the loft with it on the old SDTV. It is still hooked up via component, so it looks the best it is going to look on an old tube TV. 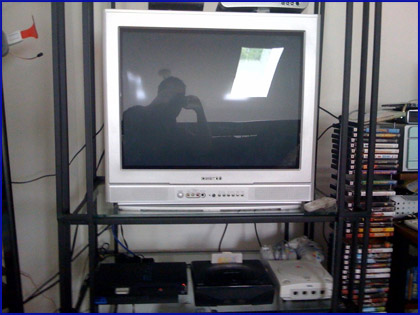 The new “slim” PS2 is hooked up to the new HDTV (also via component) down in the living room. It hangs out with its other fellow small system, the Wii, in a door in the cabinet. Thanks to suggestions from folks on Twitter when asked, we decided to go with the Logitech wireless PS2 controller to keep things tidy. It was a great recommendation, and is a fairly sturdy-feeling replacement for an actual wired PS2 controller. Should we need to get some two-player action going on, the wired controller it came with lives in the drawer above this door. 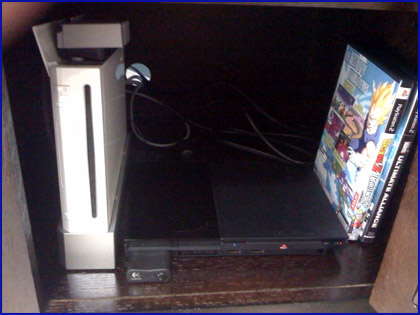 The most interesting of the bunch is the original American PS2, which has been moved down into the basement. One of the reasons we choose this house over a couple others in this development was its finished basement. The colors are… well, they are certainly “finished basement” colors rather than “rest of the house” colors… but that is neither here nor there. The old system has essentially been transformed back into a DDR-only machine on a crappy old TV. Hooked up via old fashioned composite cables, high-quality audio and video are nowhere in our mind when we want to bust out the old Red Octane Ignition 2.0 pads (seen in the reflection of my highly-artistic photography) for some DDR. In case we want to play some of the Japanese PS1 games, the original PS1 and its Pro Action Replay patiently wait in silence. Once we crash after playing for a while, the NES is just a switch away. 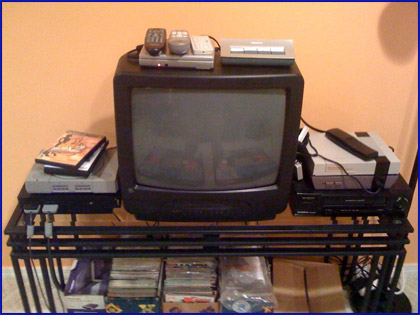 This all comes full-circle to those questions I posed back in March: why would you purchase a PS2 at this point in time? I read all of your responses, and now you have read my own. This past May, sales of the PS2 were down 32%… but they still sold 117,000 PS2s.

I am just a statistic, at this point.

Top 10 PS2 Games I Own And Have Never Played

I promised this way back on episode two of the podcast, and haven’t gotten around to tossing it together until today. I have finally put up my “Top 10 PS2 Games I Own And Have … [continue reading]