In preparation for the “Manga Review of Awesomeness” on the next podcast episode over at Daizenshuu EX, I’ve been working like crazy on my notes. One of the things I’m going to bring up works well with a little image comparison, so I figured I’d share.

In Viz’s English translation of the DragonBall manga, this is one of #17’s first lines after being awoken/activated by Dr. Gero: 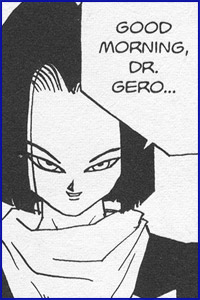 “Good morning, Dr. Gero…“. It’s a pretty straight-forward, more-or-less accurate translation of the original dialogue. Here’s how it is written in the original Japanese version: 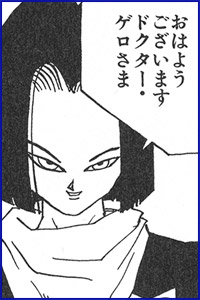 Like I said, it’s a pretty accurate translation. What #17 says is, “ohayo gozaimasu, dokutaa gero-sama“. There’s one little thing that’s “missing” in Viz’s “translation”, though, as accurate as it is: it’s that “-sama” suffix. It’s not really necessary to translate, but it comes into play a little more than you might think. While you can clearly imply that #17 is being overly-polite (to the point of it being a ruse), it’s really driven home by the fact that he actually uses the “-sama” suffix… which he would never otherwise use for this jerk-face of a doctor that forced him back asleep. It’s that one specific formality that leads Dr. Gero to initially trust him (and also #18).

In the end, it’s not a huge lost-in-translation issue, but it’s certainly an interesting one, none-the-less.

Like this kind of stuff? Hell, you’re probably already checking out our weekly podcast about that there Japanese cartoon from the 80s/90s about monkey aliens hitting each other after staring at each other for an episode. At least it’s good fun, huh?