Despite it being entirely recorded, edited, mixed, and otherwise fully completed well ahead of schedule this weekend, Episode #0161 of the podcast for Daizenshuu EX is not online. Nor have I been able to help coordinate the forum transfer over to the new server. Nor have I been chilling in the IRC channel like I normally am.

Yesterday early afternoon I was unplugging my laptop’s power cord from the surge protector which the main rig is also plugged into. I accidentally flipped the switch on it, effectively cutting power to everything there. No biggie. Nothing that hasn’t happened before. Flipped the switch, and everything immediately came back on (monitor, computer, stereo, scanner, wireless headphones, etc.). I headed out into the dining room where I was working on hooking up the new HD digital camera to my laptop (sorry; that’s all work-work related, and not play-work related!) and installed a few things.

When I wandered back out to the main rig, it was sitting on this screen: 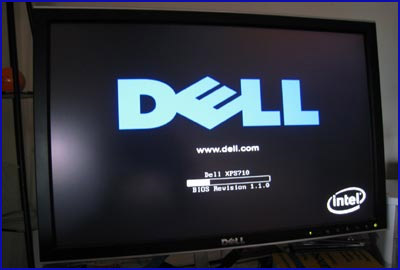 Very strange. I figured it perhaps just got itself hung up, and I would reboot and go into Safe Mode if I had to. Manually turned it off, let it sit for a minute, turned it back on… same thing. OK, now this is getting bad. I completely unplugged everything and let it sit for a long while, in the meantime consulting some friends online for opinions.

The opinions started pouring in that perhaps the power supply fried itself (or something along those lines). I found it very sad that such a simple little thing would cause such a drastic effect, but I suppose it’s not unheard of. This is also one of the aspects of computer hardware I know very little about; I can install a new optical drive or a hard drive or even a stick of RAM, but that’s about the extent of my internal-computer-knowledge.

(NOTE: Yes, everything whirled-up and sounded pretty normal when I rebooted it. The green lights on the front USB ports indicated they had power. The monitor definitely isn’t “frozen” with a burned-in screen, or anything, because I can cycle through inputs and it changes to show that it has no connected source.)

I ended up at Best Buy and picked up a 700 watt power supply, which was a contrast to the 1000 watt power supply inside my Dell XPS 710 (but all opinions seemed to be that 1000 watt was pretty ridiculous, especially considering I wasn’t exactly launching any spaceships with this computer). I had to spend some time at the in-laws’ after picking it up, but jumped right into potential repairs upon returning home. I eventually figured out that I needed to remove all three of my hard drives in order to get access to pulling out the pre-existing power supply, and it was around then that Jeff was able to run over and help me pull it apart. 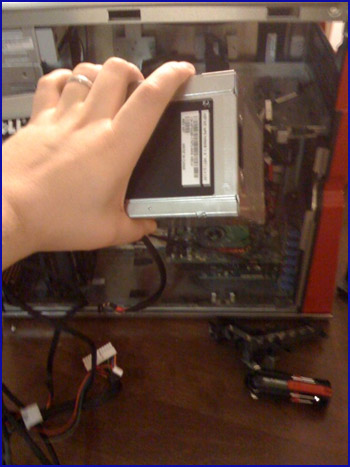 Long story short, the power supply that came with it is a proprietary 1000 watt monster. I know very little about what I’m about to mention, but it had both a 24-pin and a 20-pin connector (yes, two of them) that went directly into the motherboard, which seemed very different from not only the new 700 watt power supply I picked up, but anything Jeff had seen before. As opposed to the new power supply, The Beast had all of its wires coming directly from one spot (which you unfortunately can’t see off-screen to the left in the above picture), all filtering and twisting and winding throughout the system. We eventually managed to feel them out and get every single last bit unplugged from devices, but now I’m pretty much left with a system that has no power supply.

This is all assuming the power supply was even in the issue in the first place, which I never really got full confirmation on (not that I’d ever be able to). I called Dell customer support out of morbid curiosity (warranty expired exactly a year ago), and after being potentially up-sold to “North American-based premium customer support”, I spoke with someone I could barely comprehend and ultimately had to say goodbye to without any real help.

So now I’m out in the cold all by myself. If it is indeed the power supply, Dell does not directly sell a replacement, so I’m potentially buying a new or refurbished one off of eBay ($50-150). If that’s not the problem… well… what is? And how do I even tell?

I’ve got a GeForce 9800 GT showing up this week, too… I was planning on finishing up Portal with it and running a bunch of other stuff all silky-smooth…

Didn’t sleep much last night due to my frustration. This is on top of a 360 whose graphics card fried itself alive (not covered by Microsoft’s extended warranty, though I’ve since paid the $100 to have it replaced), and a spontaneously-bricked PSP whose current status is theorized to be a fried motherboard (which cannot be brought back from the dead with a Pandora’s Battery, which I’ve already tried courtesy of Corey, and I will thus have to pay $100 to get it replaced or just buy a new one), and a Rock Band drum whose blue pad snapped a wire inside.

(To answer a couple quick questions, yes, if I get it back up and running or can hook up the SATA hard drive with Episode #0161 on it somewhere else, I’ll go ahead and post that show. If not right away, it will be retroactively posted in the future. Yes, I should be able to record another show on-schedule next week if we feel up to it… I can record on the laptop, and do all the mixing on the Shuttle which has all the project files and bumper music masters. Knock-on-wood, but here’s hoping that main C:/-drive isn’t farked… should be completely fine, though…)

I had originally typed this up on my iPhone and was planning on posting it via the WordPress application, but I ran into a little snag: the dreaded “invalid post id” error. Now I’m re-typing … [continue reading]

I never finished either New Super Mario Bros. (DS) or Super Mario Galaxy (Wii). Both came with extreme excitement and anticipation on my end, but something about them just didn’t click with me. I may … [continue reading]