We have all seen various blog posts and comments about this (usually tying in to uneducated nonsense spewed by the otherwise-well-educated Roger Ebert) whole dilemma: can video games make you cry?

Of course, the real question is do they need to make anyone cry? Would that be the gauge of cultural relevance and a move to “high art”? Is any of that even necessary?

I don’t actually want to answer any of those questions, because I find them silly. I did, however, find some incredibly thought-provoking points over in this article by Chris over on ihobo (as linked over on Kotaku).

I absolutely adore the idea/theory/proposition that there is nothing about it being a game that drives you to experiencing some type of emotion; it’s all about the narrative, itself. There is narrative in a movie, in a song, even in a painting. By taking the “cause” out of the game, you therefore actually place the game on the same level as everything else. I think that is a really important to step, and one that we will continue to make over time. I have heard the point made time and time again that the game industry is so young when compared to the other media industries that have moved us to tears with their products. It simply needs more time to continue evolving and for all the old people to die out who have no familiarity with the medium and various business models.

I do want to address one point in the article, and take slight exception to it. Here is the exact part:

So even though, for instance, many people report that they cried when they played Final Fantasy VII at the fateful scene (and indeed, several other cRPGs also show up in player studies as having provoked tears) the moment that actually brought the player to tears was a non-interactive cut scene. It wasn’t the game (in the systems view) that made them cry – it was the story – and there never was a question as to whether stories could make you cry.

Believe it or not, I am going to dispute this point with the same example! Well, somewhat. I am not talking about the original Final Fantasy VII, but actually Crisis Core: Final Fantasy VII.

There are intense spoilers here (as if you didn’t know how it ended…), so if you have not played through to the very end of the game, keep in mind that I am going to describe not just what happens, but how it happens.

Yes, there was a bit of genuine gameplay during the ending of Crisis Core that made me cry. It was not a cut-scene; I was in full control of Zack during the point where I broke down. In between lots of events going on, and before the full-on CG ending sequence, Zack is being hunted down by the Shinra army. He has very little energy left in him, but he continues to fight back with everything he has (occasionally flashing back to memories from the course of the game along the way). There finally comes one last stand-off where Zack fights off against a (literally) endless stream of soldiers. No, really… it is infinite. You will die. You may be strong enough to hold them off for a pretty long time (especially if you have done some grinding in the side missions), but the point of the sequence is that Zack is shot down. You cannot avoid it. You progress the game by dying. 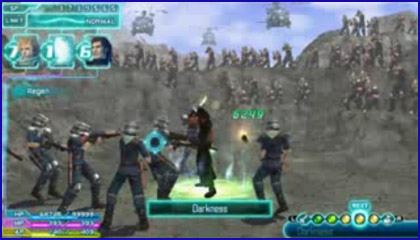 I am choking up as I write this, because this is the part that made me break down. I was in full control of Zack, but I had absolutely no control over the situation. I knew where it was heading. I knew I was going to die. There was nothing I could do about it. It was not fun. It was not enjoyable in any way. It hurt. It hurt a lot. The point where I had to take my fingers off of the buttons and let them kill me in a situation where I was otherwise in complete control was what did me in. I had to sit there and watch my character be gunned down.

While the Sega Dreamcast‘s launch on 9/9/99 was a major event in North American entertainment history (and was the sole subject of episode eight of our podcast), there was another big item that came out … [continue reading]

So I finished up Chrono Trigger about a week ago. I have written at length about it already, and am wavering on whether or not I want to write any kind of “final thoughts” on … [continue reading]