Technically it’s not my first Rock Band casualty, since the whammy-bar on my guitar is busted… but that’s not really essential for gameplay.

Last night I was playing some good ol’ Foo Fighters songs on drums, and it was going great. Switched over to play Fall Out Boy, and BOOM… suddenly failing where I otherwise should not be failing. Doing some quick testing on the resulting menu, I found that the blue pad was no longer working. Everything else was totally fine, but blue was dead.

I checked it out further this evening, and found the following: 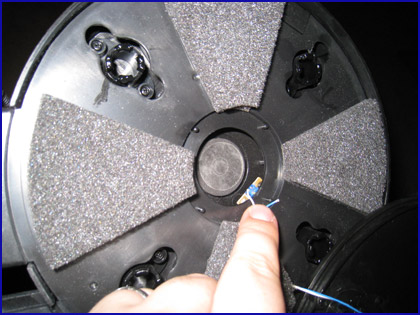 Yep, that’s a wire split right at the base where it connects underneath. Dammit! Not sure what to do about this. It seems like it’s something I could fix, but I’m not entirely sure. Anyone have experience with this kind of stuff? The fact that it’s split right at the base is the killer, since I don’t see much to work with and splice back together.

So this morning I tried to download another one of those songs that I’ve been dying for and drowning in anticipation for: “Under the Bridge” by a certain band with Chili Peppers that may or … [continue reading]