Just because a new podcast episode came out yesterday, it doesn’t mean that I can’t keep writing blog entries! I’m still here for another couple days!

We heard about it hitting the Japanese Virtual Console last month, so we knew it was on its way. That doesn’t change the fact that a SquaresoftEnix game coming out at a budget price via digital distribution rather than a $40 Nintendo DS remake is a strange thing in today’s world. 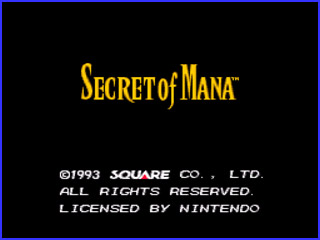 Seiken Densetsu 2, or Secret of Mana, hit the North American Virtual Console yesterday. I know Jeff will be all over it once he clears out some blocks on his Wii (I’ve got five, he’s got zero!), and Andrew I’m not sure about (probably? but he’s got his SNES hooked up and owns the cartridge…).

If you’ll remember back to our first podcast episode, Andrew and Jeff totally loved the game (as well as Secret of Evermore), but I had actually never played it. I surprised them on the show by having played a good few hours into the game before talking about our mutual top ten games. Some of my complaints were the at-times clumsy hit detection on enemies, your companions getting stuck behind things, and… well, I don’t remember much about what I said. I did recognize the wonderful music and the ingenuity of the “ring system” for the menus.

So what about me? Should I be picking it up on Virtual Console? If I do, I’ll probably wait a few months while I work through my backlog of RPGs on the system (Super Mario RPG, Ys Book I & II, Shining Force II). Does it really deserve another chance, though? What do you all think?

It hit the European Virtual Console last Friday or so, and today we got it for ourselves! Shining Force II is a game that I probably shouldn’t have a whole lot of familiarity with. As … [continue reading]

So I have a bunch of Wii points sitting around while I wait for Shining Force II to eventually come to Virtual Console, and I figured I would blow 500 of them on a little … [continue reading]