This never happens. I’m immune to this kind of marketing.

Dammit, they got me.

While doing the usual message board rounds one day back in September, I stumbled upon an advertisement that spoke to me: it was about vinyl records. Not just regular records, though: postcard records.

Having recently thrown myself into the world of record collecting/listening (something I’m massively late to the party on — but that’s a story for another day), it caught my attention and I couldn’t look away. I love novel tchotchkes tangentially related to hobbies!

The long and short of it was that this service — Vinyl Post — sends a new record each month, except that record isn’t actually a “record” as you might think these days, but is instead a postcard-sized flexi disc (a medium that has long been used as a cheap alternative to traditional vinyl). Each disc holds a single indie rock song (curated from the owner’s music blog), and comes packed with an actual postcard with a message from the respective band, a lyric sheet, and a digital download of the song.

I put in my order with the coupon code provided in the Reddit advertisement on September 3 ($2 for the first month). I was charged that same day for $2. I didn’t receive any further communication until October 3, at which point I was charged a normal, pre-paid, three-month amount ($15.65 for me), and my first postcard arrived two days later on October 5.

Something definitely felt “off” or missed on their end here; it seems like I absolutely should have received something during the month of September (even acknowledging that the item I received here in October is dated as the “September 2021” release — kinda confusing). From the registration email:

If you signed up before the 15th of the current month, your first postcard will be dispatched between the 16th – 22nd. If you signed up after the 15th, your first postcard will be dispatched around the 16th – 22nd of the following month. (Postcards are sent as letters via USPS and can not be tracked, sorry!)

I put in a support request on October 7 asking for clarification and what I should have received for that first $2 month. Josh wrote back to me the next morning, explaining that due to some delays at their plant, this was indeed the September release, and now I was paid up to receive my additional three for October, November, and December (and October will indeed be sent out later this month).

Works for me. World’s still on fire. Delays happen. I get it.

In the meantime, I had full access to the Vinyl Post website’s membership area… and by full access, I mean I could just download any song I wanted going all the way back to the start.

Thing is, you don’t even really need to be a member to listen to or even download the songs: they’re all just directly embedded on the “Releases” page, so you can stream or inspect/right-click and download right there.

It’s worth noting that Vinyl Post has released several compilations of prior releases on proper vinyl records, and members get a 20% discount on those ($20 down to $16 each)

So at this point it really isn’t about the website “member” amenities at all — let’s check out the product.

Everything came in a postcard-sized envelope. It’s super lightweight and inconspicuous. You might mistake it for junk mail. 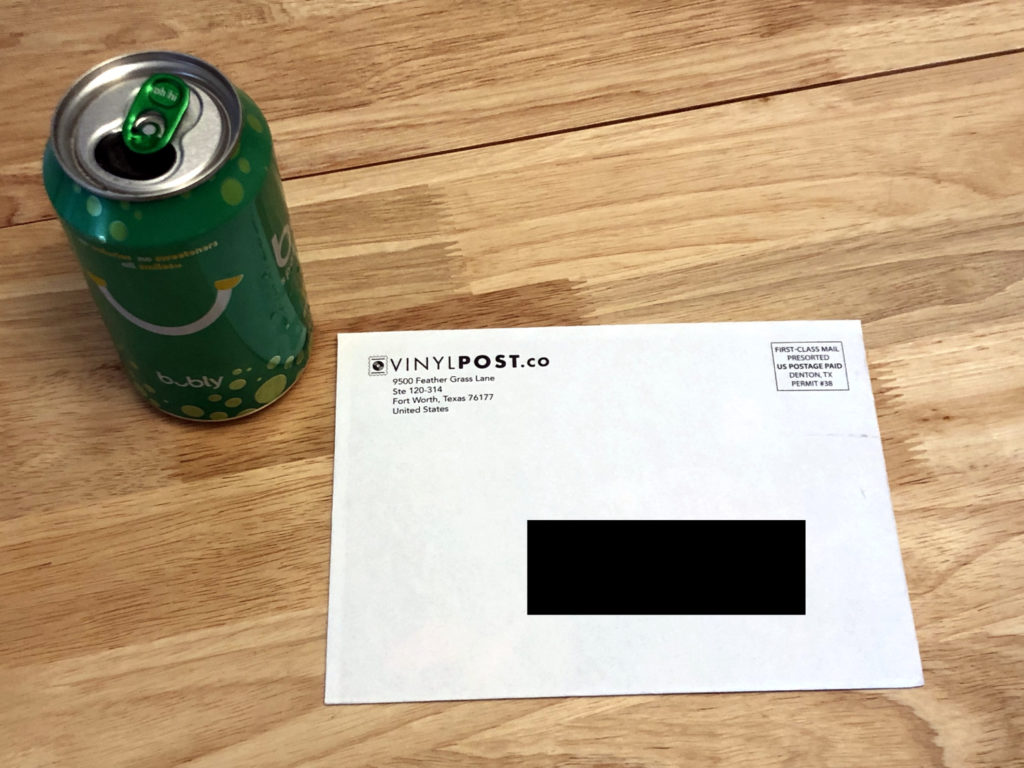 It’s a cool little package of the flexi disc, the postcard with/from/of the band, and the lyric sheet. It’s that last item in particular that really helps bridge the connection between this product and traditional records: purposefully sitting down, listening to the song, and reading along with the lyrics is “the experience” here. 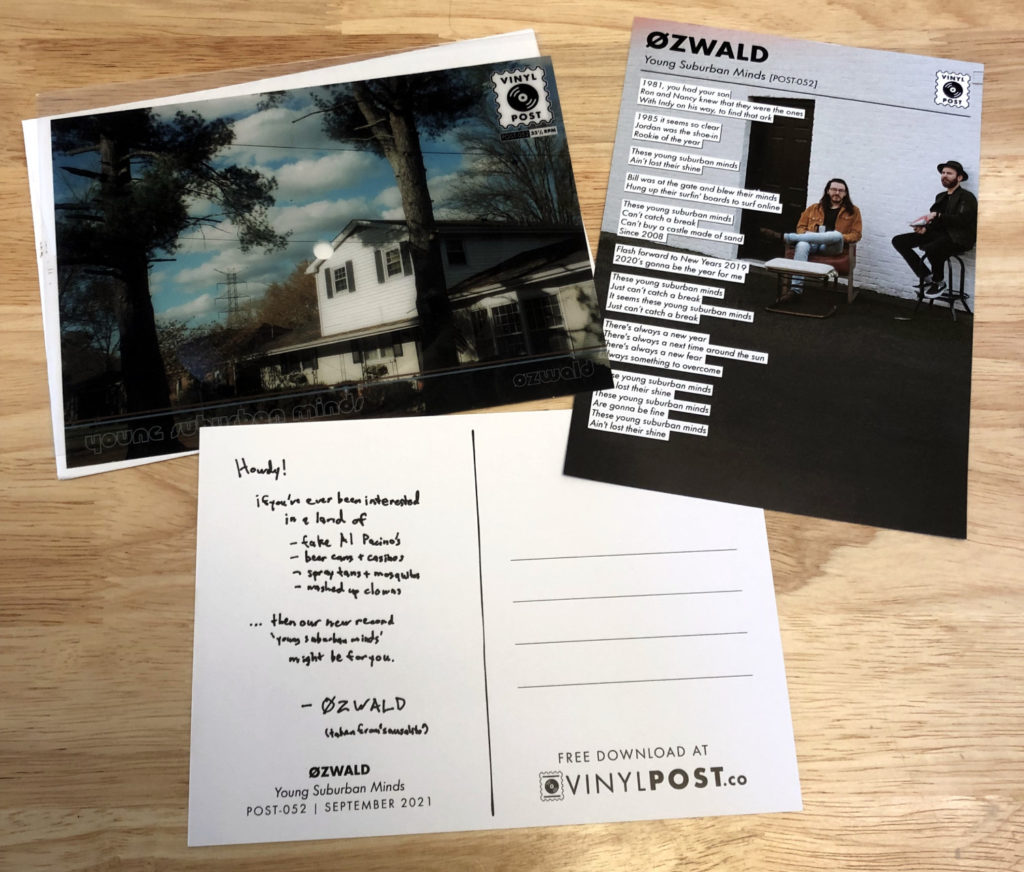 So how does this all work?

Particularly coming into the hobby when stuff like 180 gram is effectively the new norm, this flimsy little thing is adorable. 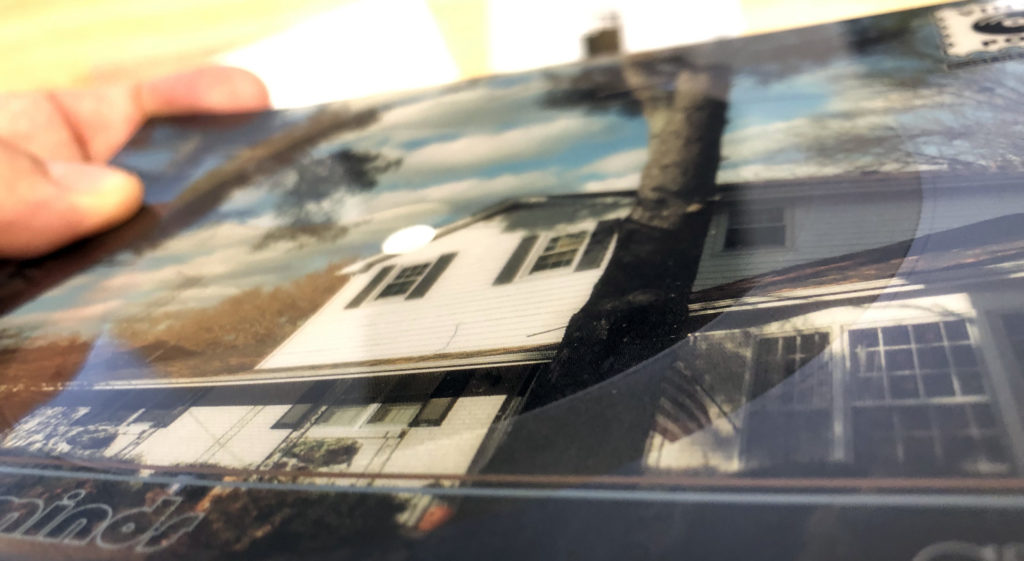 It was a bit of a struggle to get it going on my player (really just something entry-level, an Audio-Technica AT-LP60XBT, an automatic player with 7″ and 12″ settings). If I didn’t drop the needle in precisely the right starting point, it would just lift back up and turn itself off. It’s all much harder than it sounds, with these being something like 5″ circles within an actual rectangular postcard. I didn’t want to tear or bend it, so it took a little finagling to get it to sit right on the spindle. Gotta really push down.

But hey, once it plays, it plays.

My first postcard — the September 2021 release — comes from the band Ozwald, “the indie side project of lead singer and guitarist Jason Wade and Steve Stout of the band Lifehouse.” Like most folks my age (the pushing-40-or-above bracket), I pretty much just vaguely remember Lifehouse from that first big single “Hanging by a Moment” from 2000.

Ozwald’s song here — “Young Suburban Minds”, the title track off their fifth full-length album — is definitely a modern day indie rock song. It was produced in Nashville and has all that millennial reminiscence and perseverance stuff in there with a jab at the lost COVID year… yeah, I guess this whole thing is pretty solidly in my wheelhouse.

As for how it sounds… well, it’s certainly not as crisp as a “real vinyl” record would be, but I think at least for this particular band and this particular song, it all works — it sounds like a home-grown, down-to-earth, chill little tune.

I certainly don’t see myself hanging on for more than the three months I initially signed up for. At the same time, I feel like I have a little more personal a connection to this song that I otherwise would if I just found it on my own. In that respect, it absolutely plays into that physicality collection mindset sort of thing that records are all about.

It doesn’t look like Vinyl Post has put out a compilation for a while; I would like to eventually pick one up that has this song (and possibly the two others I have coming my way) as a more permanent record (pun intended) of having checked it all out.

I dunno, man. Your money is yours. Something like $5/month for a little novelty isn’t too bad, right? Check ’em out.

While this is a Top 10 list, it’s not part of a regular episode, so I won’t toss it over with the rest of the more formal Top 10 lists. This is instead intended to … [continue reading]

AUTHOR’S NOTE: This 2010 post and accompanying podcast episode was sufficient for the time (barely), but really could use a total re-do… and it’ll get one at some point! We actually know how to record … [continue reading]

We typically don’t plug things on our other websites unless they warrant it, and this is one of those cases. Jeff and I do a bi-weekly podcast called lo-fidelity where we review music, discuss music, … [continue reading]