One of the things I was most excited about and terrified of in the move to the new house was finally having a current-generation TV and audio setup to go along with the now-current-generation video game consoles. Up until last month, I had been gaming on a (decently sized) SDTV with its built-in speakers. I was at least playing the 360 and PS3 through component cables, but it was 480i with crappy audio none-the-less.

But let’s take a step back, first.

While I have not kept up with anything in a formal sense, I consider myself as having a bit of a musical background. In addition to my deep love of music (as seen by lo-fidelity), I played saxophone back in elementary and middle school and even took private lessons for a couple years after that. I dropped it mid-high-school for a variety of reasons (I think I wanted to play ska music but didn’t know what it was I was looking for), but the background was enough to carry with me and give me a wonderful frame of context for years to come. I think I have a finely-tuned ear for music, an incredible sense of rhythm, and pretty decent hand/eye coordination… all offset by a horrific singing voice, but you can’t win ’em all.

So what was horrifying about the move to HDTV gaming with a new sound system? It was the A/V lag inherent in the new technology that frightened me away like a dog with its ears down and its tail between its legs. For someone who can tell if anything is off-beat by even the most minor of measurements in milliseconds, “looking forward” to lag does not seem to make much logical sense. I ended up going with the following items for our setup:

Between all the HDMI and component cables, speaker wire, and miscellaneous items I made sure to pick up ahead of time, we were able to put together a complete setup (with an additional two speakers coming at some point in the near future, and actually putting the surround speakers somewhere other than in front of the TV): 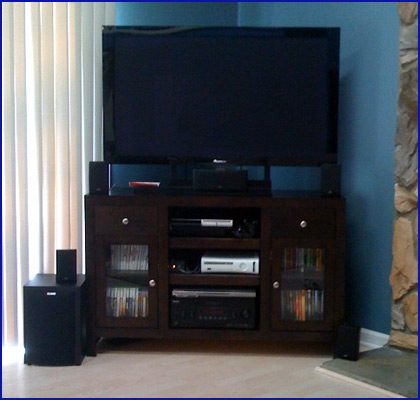 I knew things would potentially be OK with games like Rock Band where there was a thorough lag calibration system in the game’s options, but that wasn’t what I was most worried about. I wanted to start with the very basics, and move up from there. The first thing I popped in was the Wii, and set its display to 16:9 and 480p. It was wonderful to finally see the system taking advantage of what it could do in a larger display format, and I salivated at the thought of finally being able to see things in games like Super Smash Bros. Brawl. However, like I said… let’s start with the basics. It’s Virtual Console and Super Mario Bros. time. 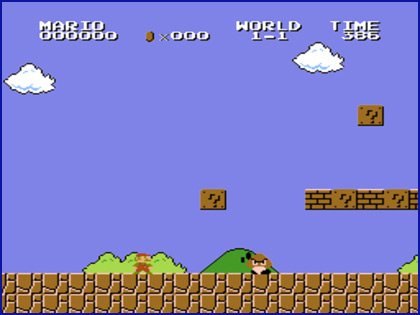 I was very much let down by the fact that the Wii did not automatically adjust to display games in their 4:3 format, and instead stretched it out to fill the 16:9 display. While there are a variety of ways I could adjust this, I found that the most convenient was to switch the receiver to output in 480p (rather than the upscaled 1080p), which for whatever reason scaled it back to 4:3 progressive rather than 16:9 progressive (which the TV then recognized and added the gray pillar bars on the sides)… but that was OK. Display issues were the least of my worries, though, since I knew I could adjust those on the fly. I was most concerned about lag, and especially with games I knew as intimately well as the original Super Mario Bros. Everyone has games that they have grown up with and feel are almost an extension of their hands and fingertips. Muscle memory takes over, and you feel like you could play an entire world blindfolded if you absolutely had to.

This is where it starts to break down. While it may be imperceptible to those not as familiar with it, Super Mario Bros. actually felt sluggish and unresponsive. Mario still jumped when I pressed “A”, but there was just enough of that insignificantly minor delay that I was accidentally jumping into Goombas and missing a couple pixels on the edge of a staircase after a jump. It was as if someone stole half of a cookie from me; the love and enjoyment was still there, but I knew I was missing something that held it back from being a complete whole. This made me wonder if I wanted to bother playing any old games at all on the newer setup if they were not going to feel the same to me. Sure, you could go tinker around with things like the receiver’s A/V lag calibration, but that only helps with things like movies where it can delay them both to match each other without worrying about real-time controller inputs to actively display in real-time right back at the viewer (geeze, that’s a mouth-full).

I decided to play another “old-school” game, but this time one that I was not as intimately familiar with. Would I even be able to tell if there was lag? If I had zero frame of reference, would I know any better? With all the hub-bub over the new release, and remembering the minor fanboy fiasco with HDTV lag issues when it first came out on Virtual Console, I decided to go back and play some more of the original Punch-Out on NES. I had only briefly played the game as a child, and even though it had been sitting on my Wii for months upon months, I had still only briefly played it and therefore had no memories to compare it to. How would it fare? 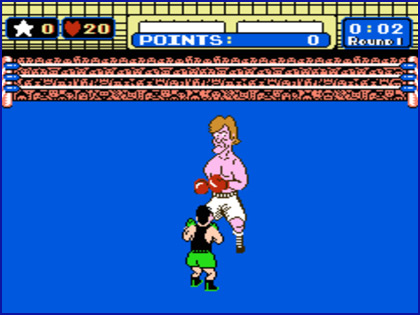 Well, I did the best I have ever done in the game. I made it up to King Hippo and could not honestly tell if there were lag issues. I am sure beyond all reasonable doubt that there were delays in the movements due to input lag… but coming into it completely fresh, I could not tell the difference. It felt like an entirely normal gaming experience to me, and one that I enjoyed to its fullest. Was my brain compensating for the lag, but making the entire process transparent to me since there was that lack of a frame of reference?

I have since played plenty of other games, both of an old and newer generation. I put an entire day into Pure on PS3, and while it may be due to the customizations and general control style of those types of games, my ATV felt as it should. Playing as Jigglypuff in Brawl felt normal… but then again, it’s a slow character, and the Wii was playing in its standard 16:9 / 480p. Street Fighter IV and Soul Calibur IV felt completely normal, as well… and those are faster games that we expect to have and demand pixel-perfect responses from. I still have a problem even with games like Rock Band, though; while the calibration options are supremely impressive, it does not change the fact that you are not actually playing the songs in real-time. When the drum solo bits come up, what plays through the speakers is not at the same moment as when you hit the drum pads (it is delayed by just a few milliseconds)… which in addition to making you look and sound like a complete spaz of a drummer, it can throw off your rhythm by leaps and bounds.

I still have a lot to learn about these types of setups and the best customizations to make. The Wii’s settings in conjunction with the type of upscaling the receiver is doing seem to have an effect on the input lag. I continue to learn more about the TV’s options and its different modes, so I may be able to customize things a little more to reduce lag (it looks like the “Game” display mode does nothing more than adjust colors and brightness, but when used in conjunction with another switch it may turn off things like noise reduction that affect display lag).

Instances like this make my yearn for the days of old when we hooked up a RF switcher to the TV (uphill both ways in snow)… and we liked it. Technological advancements like this are common place in all hobbies and everyday life processes, and it pains me to think that I am getting grumpy over them. While the ends may justify the means (having an impressive, enthralling, and engaging gaming experience), it reminds me of other hobbies like AMVs where the necessary preparation effort and time-sink are enough to deter me from even getting started, despite loving the end product.

Maybe having a retro setup is the way to go…? 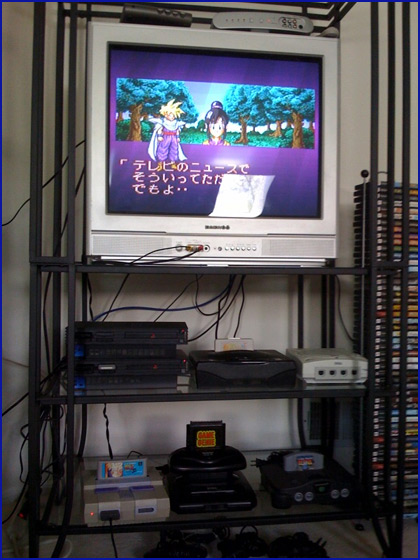 That doesn’t change the fact that I will be picking up more older games via download services like Virtual Console and XBLA than I will old NES cartridges (though, incidentally, I do have the NES hooked up to an even smaller TV in our finished basement). Will the lag be non-existent to me in games I have never played? Will I be able to optimize things better as I go along and learn more about the setup I’ve purchased? Can we just go back to the 1980s, please?

So today, Ys I & II came out on the Virtual Console. I’ve always wanted to check out this series, and never bothered to do so (either through emulation, or actually picking up a damn … [continue reading]

It was Christmas 1998. I was a junior in high school. While I had a semi-part-time job, I was not raking in much of my own cash and could not purchase every single game I … [continue reading]

So apparently the Master System version of Sonic the Hedgehog 2 is available on Virtual Console today.  As you may know, the Genesis/MegaDrive version is one of my favorite games of all time. If I … [continue reading]