So I was down at Anime Weekend Atlanta (or just “AWA”) this past weekend doing all sorts of wonderfully nerdy things with a whole bunch of seemingly-equally-nerdy people. Saturday afternoon I happened upon a couple DBZ cosplayers, and felt obligated to take a few photos. Here’s the first one I snagged (off the ol’ iPhone): 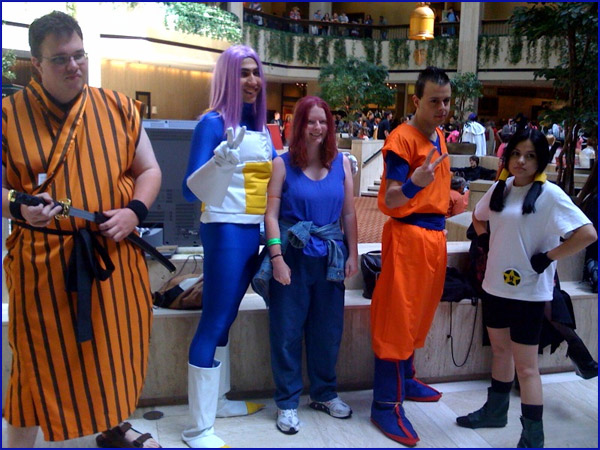 After I took a couple pictures, I started up a little conversation with them, and found out there was going to be a larger gathering of DBZ cosplayers at 12:30 pm. Awesome! Not only people of my own kind, but multiple super-nerdy people of my own kind! Once we got a little dialogue going, I figured it was as good a time as any to mention the website. I asked if it was OK to put the image up on my site, and then if they had ever checked out the DBZ podcast that we do.

Yajirobe (the one on the far left) stared at me blankly for about four/five seconds, and then replied, “What’s a podcast…?”

As the guys over at GeekNights have said time and time again, it’s all well and good that we are trying to get other podcast listeners to check out our own shows, but what we really need is for more people in general to listen to podcasts in general… not specifically our own shows. If they don’t even know what the word means, how on Earth are we to expect them to listen to our piddly shows?

What came next was the real killer. After briefly explaining that we do this cool show every week talking about what’s going on with news, in-depth topics about the series, etc., the same guy blankly stared at me again for a couple seconds and replied, “Well, I’m not that big a fan…”

I did everything I could to hold myself back from saying, “BUT YOU’RE $%#@ING COSPLAYING GOD-DAMNED YAJIROBE~!!!!1”

My buddy Kevin has asked me a couple things about my podcasting equipment lately, so I decided it would be helpful to a few people if I just put it all out there. In the … [continue reading]

(I initially wrote much of this article back in March 2010, but held off on publishing it due to never receiving permission to re-publish an e-mail. I have decided to just go ahead with it. … [continue reading]