You may have heard about it on the most recent podcast episode, but let me break it down for you.

On June 18th, a bunch of people were over to go out and see The Dark Knight. In between picking up tickets and going back to see the movie a few hours later, we came back to our place to play a little Rock Band. Shortly after starting to play, strange things started happening with the display on the TV: weird green “splotchies” were all over the place. At first I assumed that a cable was loose with the new component switcher, but that was not the case. I tried plugging the cables directly into the TV (as opposed to going through the switcher), but the same thing happened. We played through a couple songs, anyway, and moved on with our evening.

The next day, I tried switching over to using regular ol’ (ugly) composite cables, just to see what would happen. At first, everything seemed OK! Shortly into watching a video, however, the same “splotchies” resurfaced to cause trouble.

After plenty of tests with various items and doing a little research around the intarwebz, I came to the conclusion that I am one of a small minority experiencing an issue with the GPU / video card essentially frying itself alive inside the 360. It’s a two-step process. The first step is that you get the aforementioned green “splotchies” which, at their best, look like this: 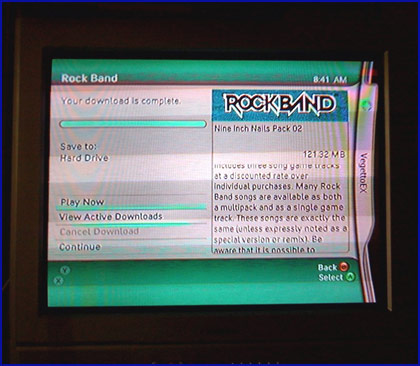 And at their worst… well… you don’t get a video signal. In fact, the component switcher doesn’t even recognize that there is a video signal hitting it at all. Amusingly, audio still works perfectly fine, so you can blindly browse back and forth along the blades hearing the “whoosh”.

I kept putting off calling Microsoft about it, hoping the damn thing would just red-ring itself. Unfortunately, I was literally less than a month out of my standard one-year warranty, and this type of problem is not covered under the three-year extended warranty (exclusively for the red-ring hardware issue).

I would check the system every so often to see how it was doing with video. It ranged back and forth from having the green tint to being completely gone (which is where it is right now… no signal what-so-ever). Once Steven Totilo wrote about it over on the MTV Multiplayer blog, I was hoping the issue would get a little more attention… but unfortunately that just hasn’t happened.

I finally broke down and called Microsoft customer support for the first time, yesterday.

The first woman I got sounded like she had a horrible cold and could barely speak. I’m pretty sure she hung up on me; the call didn’t “drop”, but it died. I wonder if she had to vomit and just couldn’t take it anymore.

I called back and spoke with “Richard” (lolzsurethatsyournamewhatever). After going through a lengthy process of struggling to understand him and informing him that I actually knew what I was talking about, we set up the “generous” $99 repair, and a box would be arriving in three-to-five business days. After I was done with him, I asked to speak with his manager to dispute the charge (since it’s a documented issue that Microsoft unfortunately refuses to publicly acknowledge). I spoke with “Joy” (riiiiight…) and continued to struggle with understanding a single word spoken aloud to me. She talked me in circles for about ten minutes, ready to get me off the phone as soon as she possibly could.

I don’t really have a problem with how they handled the situation, since they’re nothing more than outsouced phone support, and to their credit, they were incredibly polite the entire time. I’m furious with Microsoft, however. I really wanted to be one of the lucky ones to get the red-rings, and I’m instead one of the unlucky ones with faulty hardware that Microsoft is choosing to remain tight-lipped about.

I’m hoping they’ll go back and do a retroactive reimbursement for this type of repair once they eventually acknowledge the damn issue. Until then, I’m hoping I get my damn system back in time for Rock Band 2 next month. If not, Andrew’s going to have to bring over his system.

Hey. In the new house. Let’s blog, again. So as you may have read on the site and heard on the podcast, I received a replacement Xbox 360 last September. I did not have a … [continue reading]