When you find yourself with a free afternoon in Las Vegas, what better choice is there than to… *checks notes*… take a ride out to Chinatown Plaza…?

The Theme: Journey to the West

Las Vegas’ Chinatown Plaza (4205 Spring Mountain Rd, Las Vegas, NV 89102) is only about two miles — roughly 10-15 minutes by car depending on traffic — directly west of the main strip. Originally opened in 1995, it’s theoretically host to Las Vegas’ largest concentration of Asian businesses. Their website claims the plaza’s “theme” is based on Journey to the West: 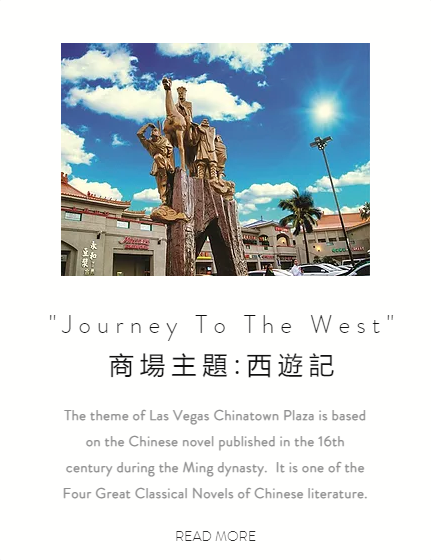 Well, when they say “theme,” what they really mean is “we have one big statue outside, and there are a couple other littered references.”

Outside and the Main Statue

The main statue – right in the center of the plaza, after you enter through the pagoda and in front of the main building – is pretty impressive. Maybe I’m just easily impressed by Journey to the West stuff. Wukong is up front, focusing his eyes on the journey ahead with his golden-hooped compliant rod ready at a moment’s notice. Tripitaka rides atop their horse (in actuality a dragon; it’s a long story), while Wujing and Bajie escort alongside and behind, respectively. 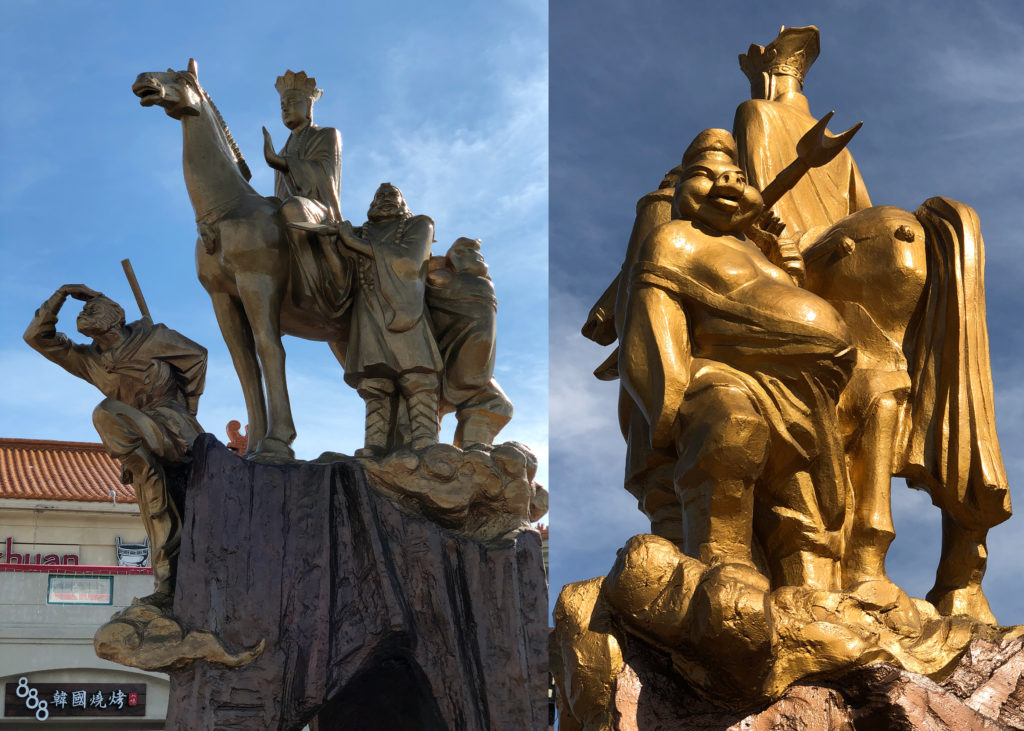 I found it pretty hard to capture the statue with my phone. I initially arrived somewhere around 10:00 a.m., and the sun was in a difficult position. If the light hit the statue just right, it really did appear golden. If not, it looked pretty dull. 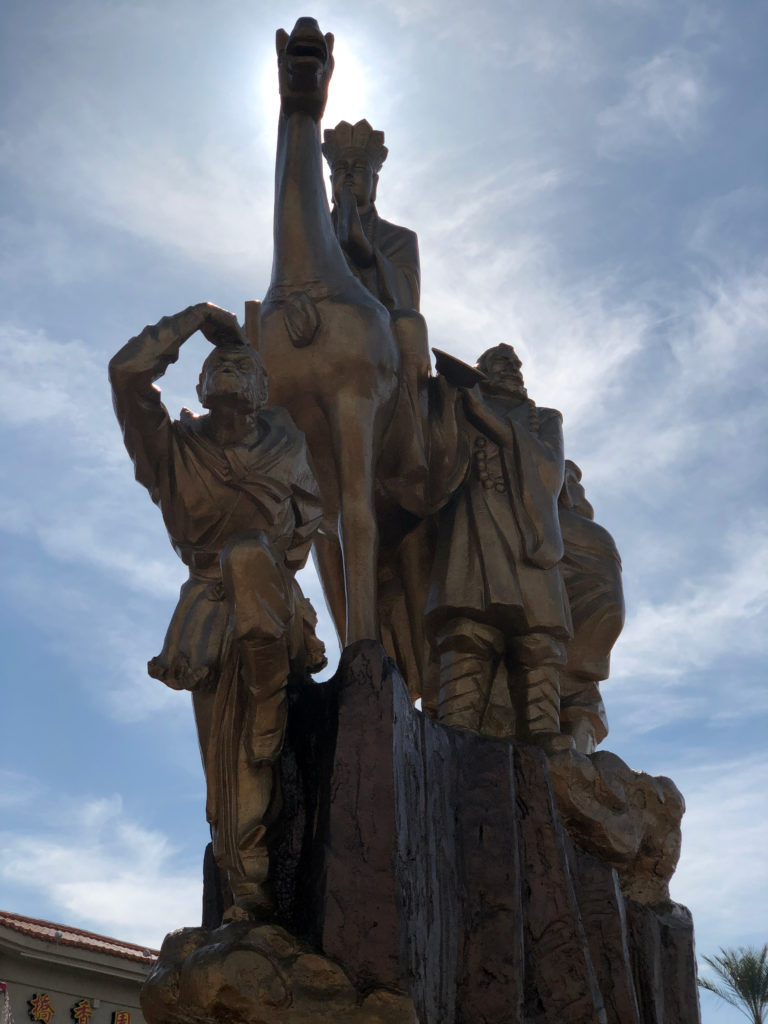 Below the statue is a plaque which reads: 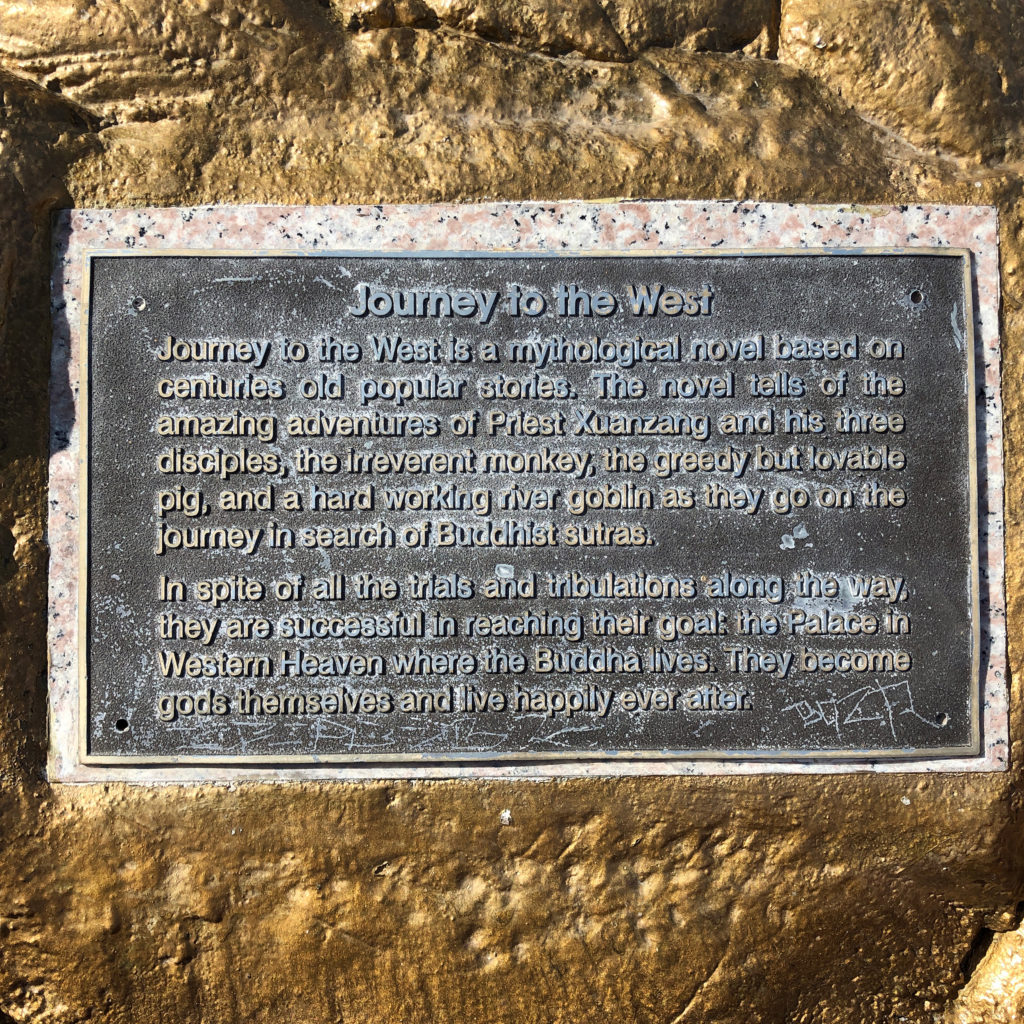 Journey to the West
Journey to the West is a mythological novel based on centuries of old popular stories. The novel tells of the amazing adventures of Priest Xuanzang and his three disciples, the irreverent monkey, the greedy but lovable pig, and a hard working river goblin as they go on the journey in search of Buddhist sutras. In spite of all the trials and tribulations along the way, they are successful in reaching their goal: the Palace in Western Heaven where Buddha lives. They become gods themselves and live happily ever after.

That’s a pretty decent, if not necessarily 100% accurate, simplification of the story!

One last outside angle: it’s a little jarring when you turn around, look back at the entrance, and see things like the electrical supply store across the way. 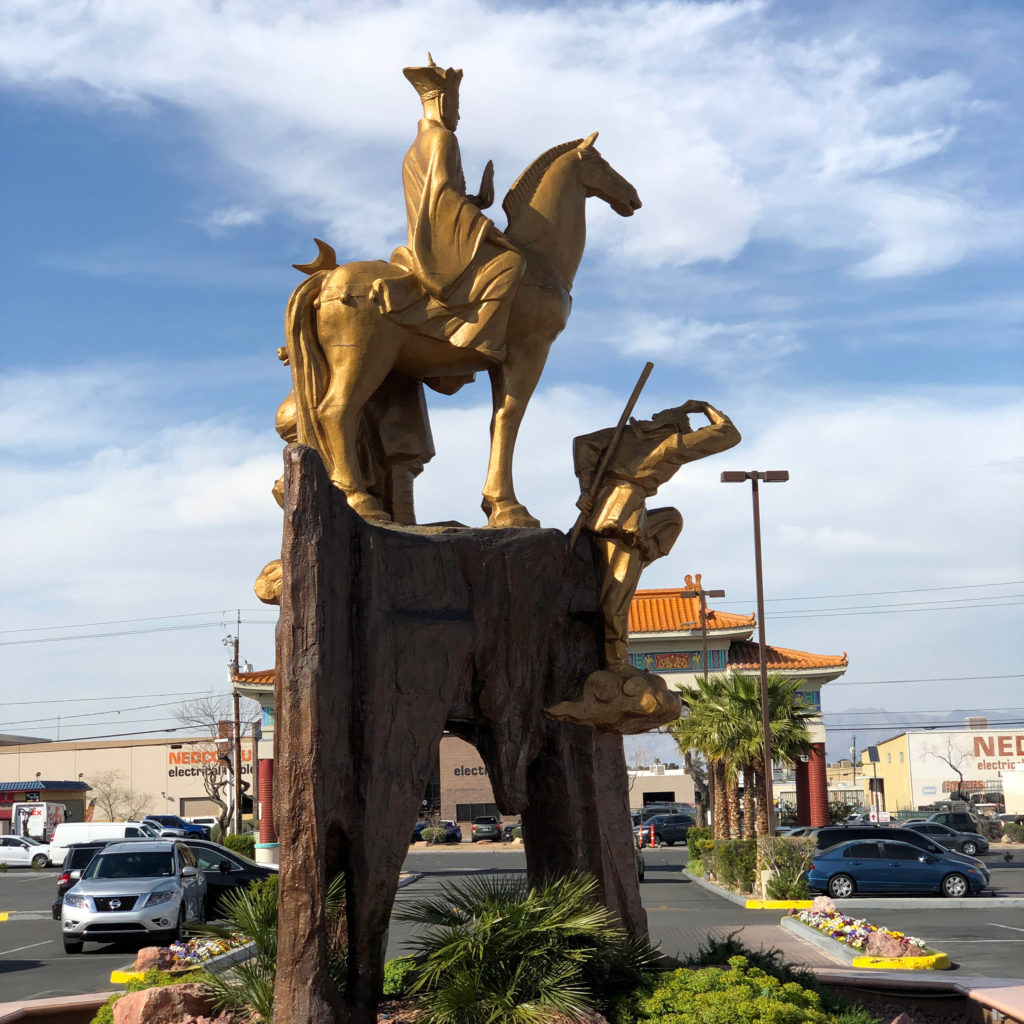 Inside the main building (the front entrance is down around to the right), you’re greeted by a pretty colorful setup with Wukong himself. I didn’t see any signs around here, but I’m assuming this is supposed to be Wukong in his original home, the Flower-Fruit Mountain with its Water-Curtain Cave. 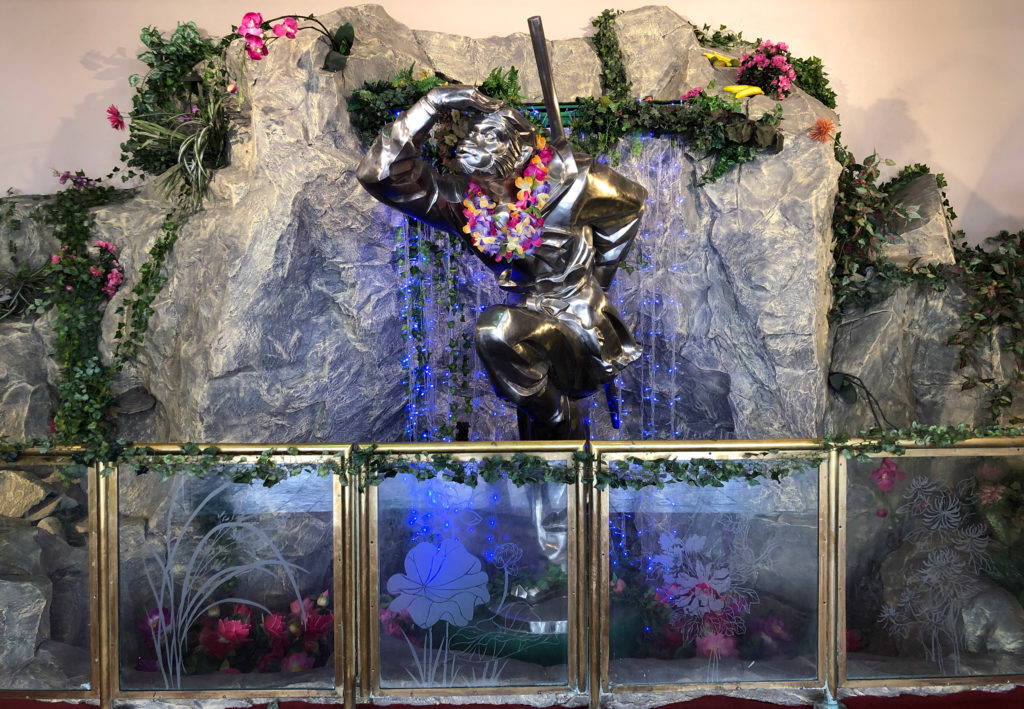 And… well, that’s pretty much all I saw for Journey to the West stuff, except for one instance of Bajie at the Noodle Pot restaurant. 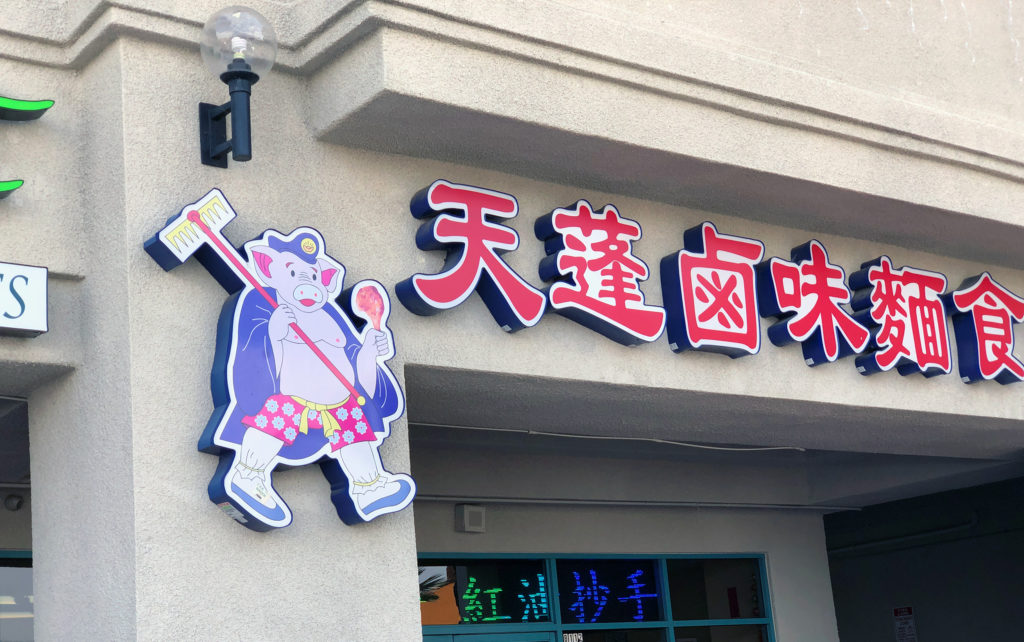 Unfortunately I arrived too early in the day for most of the restaurants to be open, so I survived for a bit on a coffee and snack from the tea house.

One store that WAS open, however, was the Great Wall Book Store, which was loaded with all the usual bootleg merchandise you would expect to see in any given Chinatown. 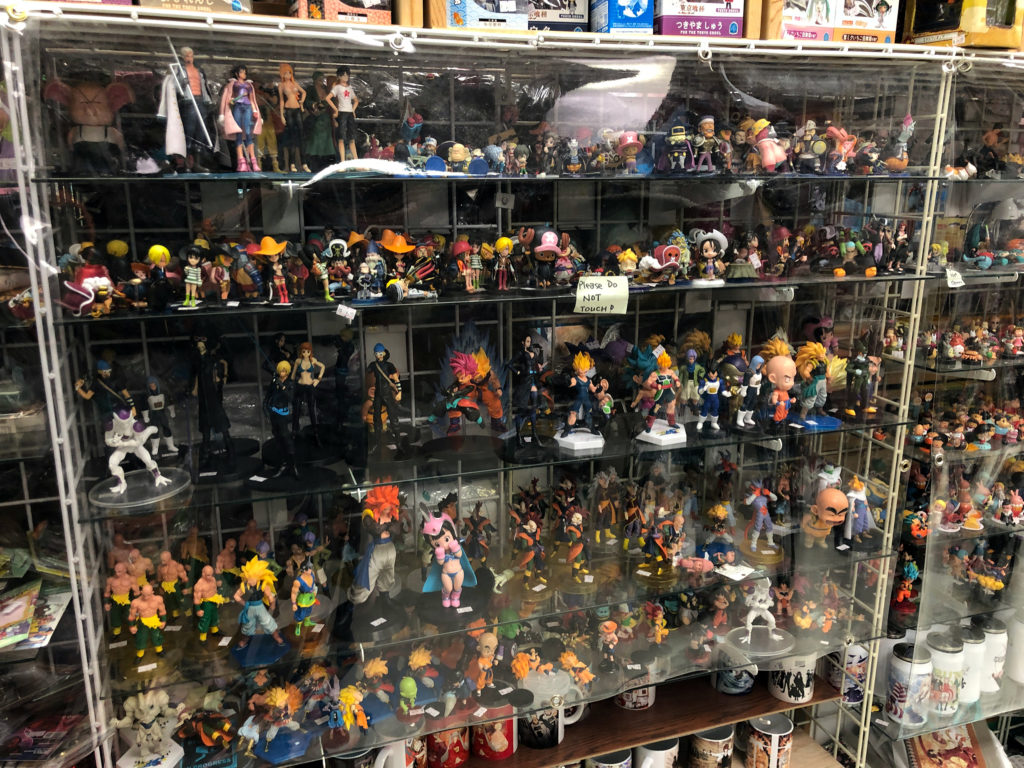 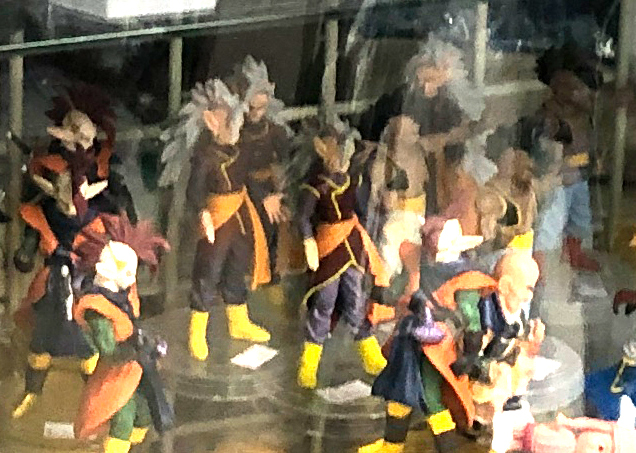 I’m preeeeeeeetty sure that’s supposed to be West Kaioshin, who – let’s be honest here – only gets figures because of Toyble’s Dragon Ball AF.

I don’t know that I can really recommend going out of your way to check out the Chinatown Plaza in Las Vegas, especially after showing you literally everything there is for Journey to the West stuff. Maybe I missed something? I doubt it, because I really scoured the place looking for anything else to take photos of. Maybe when they hold events again it would be fun to check out?

I’m spending a lot of time with Journey to the West again for a bunch of website/wiki work, which is what rekindled the memories of visiting Chinatown Plaza in Vegas. I know I tossed out some photos on Twitter at the time, but the blog definitely gives me a better space to share and expand upon things.

Until I’m ready for any of those pages to go live on Kanzenshuu, here are a couple things you can check out: