As you can probably tell from the various podcast episodes I have done (including here on vgconvos), while I love topical discussions, I also adore old stories. Anything filled to the brim with reminiscence is right up my alley. I love hearing how people grew up with games, how those games affected their lives, and any little vignettes they care to relay.

This is one of those quick, old stories.

I have spoken before at length about Zelda II and whether or not I actually like the game. I shared how I have never actually beaten the game myself, but a childhood friend has the personal glory of owning a save slot on my cartridge with a completed game (and amazingly enough, my game’s battery still has not croaked): 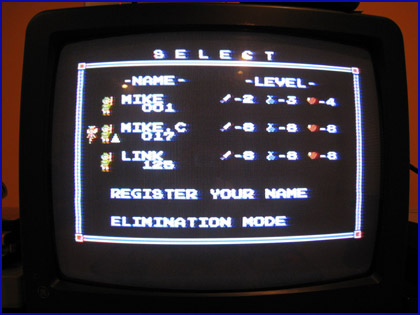 Rewind to the previous game: the original Legend of Zelda.

Mike C. was always a slightly-better gamer than I was — not significantly so, but enough to impress me just enough without leaving me scornfully jealous. It was definitely fun times. We both played the Hell out of the first game, sitting down for long nights in front of the TV (long after our parents thought we were asleep) and trading the controller back and forth on levels and save slots. Mike C. beat the first quest before I did, and the two of us turned our attention toward the rumored-yet-true second quest.

Anyone who has played the original Zelda knows how completely arbitrary some of its discoveries can be. Burn a random tree here, and you found a cheap store. Bomb a random area of wall here, and you found an old man who steals your money. In the second quest specifically, walk through this random wall that cannot be bombed and shows no signs of passage in any way, and you found a hidden passage. Once you realized that only one “secret” would be present on any single screen, things fell into place a little more…  but it still felt very “random”, even with the amazing feeling of accomplishment.

It is that combination of “randomness” and “accomplishment” that gave me one of my only one-ups on Mike C. with the second quest. We roamed the map for days looking for level six, but could not find it. Level seven was a tree burn, sure, and we found that one ahead of time no problem… but where the Hell was level six…?!

Its original location held no clues, but I was convinced that it would still be around the graveyard in some capacity. We pushed every grave stone. We bombed every wall. Nothing…

… nothing, that is, until one night by myself when I decided to blow the whistle/recorder on each of the six graveyard screens:

Words can not describe how proud I was of my child self, and how devilish it felt to be the one to share the information with my buddy.

Since I’m leaving for my honeymoon tomorrow, I was briefly over at Jeff’s dropping off another key and talking about our kitties. I had a bunch of my stuff returned top me while I was … [continue reading]