OK, so “media” is somewhat laughable when you consider the source this is coming out of, but let’s be honest… seeing your site mentioned in print, no matter what that print form may be, is a pretty awesome thing.

We are cleaning out a few things in the apartment as we get ready to eventually move into the new house, and I have been pulling together all of the various magazines I have sitting around. I came across this: 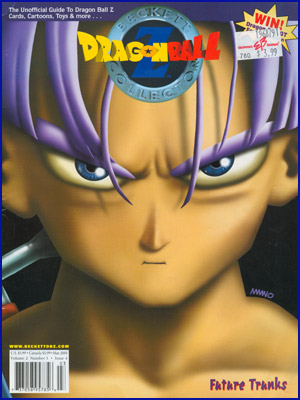 Back in March 2001, an issue of Beckett DragonBall Collector had a two-page column called “DBZ Online”. It was mostly a feature about FUNimation’s official DBZ website, but the very end of the column had a little box for other (fan-created) websites that fans could visit. Lookie, here! What’s that second site listed…?! 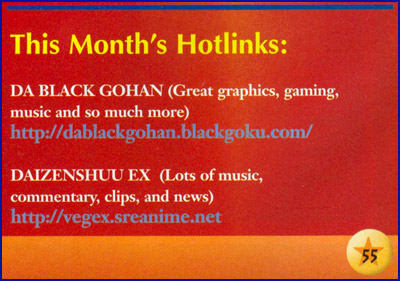 Again, it’s laughable when you consider the source and the companion link (“Da Black Gohan”? Really? This is where you want to send people?)… but you can’t help but smile to see your stuff given some attention somewhere.

These Beckett magazines were always of dubious quality, even though a couple halfway-authoritative people signed on to do some translation and writing work. For example, in this particular issue, Greg Werner (of The Ultimate DBZ Info Site) wrote articles about DragonBall GT (two years before it would be mentioned by FUNimation in the US) and a follow-up translation of the timelines featured in the daizenshuu and Perfect File books.

Long story short, it was great to find the magazine again and get a decent scan up online so I won’t lose it. I wonder if the people on Wikipedia working on the DBZ articles will now consider Daizenshuu EX a credible source since it’s been listed/featured as an authoritative reference in a media source. *insert snarky smirk here*

Daizenshuu EX has been around in some capacity (whether it was named that or not!) since January 1998. Yeah, in internet years, we’ve been around for eons. Once it began to receive any kind of … [continue reading]

AUTHOR’S NOTE: This blog post was written in 2011, two years before Battle of Gods and four years before Dragon Ball Super. It’s a little rough around the edges in terms of writing, but I’m … [continue reading]