I was going to write an entry today linking over to my personal blog where I reviewed the first volume of The Legend of Zelda manga released by Viz, or I was going to talk about how I finally sat down and played a little over an hour of the first Halo last night (and thought it felt a lot like how Half-Life started, which I’ve also started playing)…

But it all seems pretty pointless, now.

I’ve been pretty depressed about the 1UP fiasco since last night. It’s almost like a bunch of my friends just died. It’s that emotionally effective right now. OK, so not quite (let’s not get out of hand), but I don’t know how else to describe it.

If you have absolutely no idea what’s going on (and yet somehow still read this blog, which boggles my mind), the 1UP network has been sold to the Hearst Corporation / UGO Entertainment. Along with this comes the closing of Electronic Gaming Monthly as a magazine, and something like thirty layoffs at 1UP (including the entire audio and video team).

It’s no secret that I’ve been an EGM fan since the days of Ed Semrad (I think I missed Steve Harris in the earliest days). I saw Ed go, John Davison come in, John leave, Dan Hsu step up, Hsu leave, and finally we had James Mielke with the last stand (I’m sure I missed someone in there). Fighting game reviews from Sushi-X were always amusing. Trickman used to be relevant before the rise of the internet. The import previews were amazing, in-depth, and under-appreciated. I have the multiple Sheng Long April Fools jokes. They even temporarily “got me” with the Sonic & Tails being in Melee prank. I have plenty of issues of EGM^2. There are far too many memories for me to relate, and far too many boxes piled up with issues dating back to the early 1990s that I love to go through every so often. I’m pretty sure the first issue I got that started my long string of subscribing was #51 from October 1993, but I was able to go back and pick up another great issue from even further back at some type of yard sale around that year or so… issue #29 from December 1991. 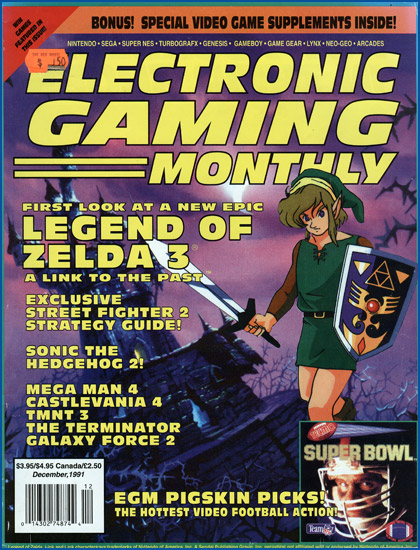 Just like a lot of the guys ‘n gals that worked there up until today, I basically grew up on EGM. But now it’s essentially over. Sure, everyone is going to move on to new things and I’ll have absolutely no problem following along with them and their wacky adventures (just like when ZDTV/TechTV dissolved), but that special spark is going to be gone.

I actually found myself overdone with EGM around 2002. I was certainly still into games, but I guess the internet just really killed off any interest I still had in subscribing to and purchasing magazines (and I had quite a few over the years… EGM, GamePro, Nintendo Power, Sega Visions, Ultra Game Players, GameFan, etc.). Some time around 2006, though, after getting interested in doing podcasts on my own in the year prior, I rediscovered what had become 1UP. EGM was a part of it, but it was something much bigger.

Quite honestly, it was the podcasts (namely 1UP Yours and The 1UP Show, but also Retronauts and EGM Live / 1UP FM) and video shows that brought me over to 1UP, and even back to EGM. Many of the faces I knew were gone, but some still remained around in some capacity. When John moved over to What They Play, he still stuck around to do 1UP Yours and a column in the magazine. “Shoe” (not to mention Crispin Boyer) stuck around for quite some time, and a little part of my childhood died when they decided to leave 1UP/EGM in 2007 (even with the start of Sore Thumbs, it wasn’t the same).  All the “newbies” that had no name recognition for me became part of the group (and some of them had been around for plenty of years, without me actually knowing)… Shane Bettenhausen, Garnett Lee, Jeremy Parish, and then the true new-blood (“the kids table”) like Nick Suttner, Phil Kohler, David Ellis, Matt Chandronait, Ryan O’Donnell…

I never got into the PC side of things too heavily, so I never listened to GFW Radio, but the guys like Jeff Green and Shawn Elliot also became mainstays for my further readings and guest-appearance enjoyments.

I could just type out every single staff member from 1UP, because they all became “friends” to me the same way that I imagine a lot of my longtime website visitors and podcast listeners across all my sites and shows may see me, but to an even deeper level. This is just an in-my-free-time gig, but for them, this was their job. Through text, audio, and video, we got glimpses into their worlds, their thoughts, their experiences, and everything in between.

This group as a whole is essentially gone, and while they’re all amazing guys ‘n gals that will have no problem landing on their feet (those let go, anyway), it still bites the big one. Seeing it coming for the last month (via Gamasutra) didn’t help matters at all. Sure, Destructoid had a halfway-interesting take on the financial figures which rings true in today’s world, but when you have someone like me that only came back to 1UP and EGM (as a paying subscriber, no less!) because of the podcasts… well, the math isn’t that simple, is it, corporate America?

I already got a text from Bryce earlier today lamenting the loss. I’ll be picking up an additional January issue of EGM to frame up for the wall (yes, Mielke said there will be one last issue to come out, but it sounds like it will be digital-only). Those that I didn’t already have followed on Twitter are all set up so I can follow along with “my buds” in the future.

How about you all? What are you feeling?

So here we are about two months after the first episode of this little side-side-podcast. It’s certainly living up to the “what I want, when I want” mantra that I set forth! While we were … [continue reading]

It’s that time of the month, again! We’re pretty much on-schedule, and here to hit you back with another podcast episode. Since I’m getting married next week, and therefore all parties involved are pretty busy … [continue reading]