My buddy Kevin has asked me a couple things about my podcasting equipment lately, so I decided it would be helpful to a few people if I just put it all out there. In the end though, I don’t know how “helpful” it will be, since anyone with more experience than me will see my utter incompetence with audio! I have next to no idea what I’m doing, but I’ve somehow managed to create shows that sound at least halfway listenable. You’ve already read about my “podcasting empire”, so feel free to check out any of the shows to get an idea for how it all sounds (keeping in mind that we record Lo-Fidelity over at Jeff’s on his computer, though it’s all my equipment + his own microphone).

So back in mid 2005, I decided I was going to jump on this “podcast” bandwagon with Daizenshuu EX. I was looking for something “new” to try out, and I always liked doing things bigger & better with that site. For our first episode, I’m pretty sure I used a very cheap (~$10) headset I had lying around (which has since broken itself into a million pieces because it was so cheap). After that, I moved on to what most people seem to do when they have no idea: RadioShack!

Before getting into that, I should at least mention the way I record things. With Daizenshuu EX, we try to have Julian on as much as possible (which can be difficult when he’s over in Japan, but we do our damndest). I have found that for me, the best way to record him on my computers has always been to have CPU #1 output Skype to CPU #2, which records Julian on his own audio track. You may hear Dave & Joel do a “1, 2, 3, *clap*” during their recordings; turns out we do a very similar thing. This lets me line up the claps on both audio tracks so I can edit them together in sync with one another. I actually do the clapping myself which gets recorded on both tracks. I know, I know… I just said that Julian gets recorded on his own track. Let me explain.

My main computer is a Windows XP machine (started out using our Shuttle, but have since moved on to our big XPS; this doesn’t really matter, though). All of the recording stuffage from our local side goes into the “line in” port on the computer. Here are my audio properties while recording:

You’ll note that the “Line-In” port is muted on the local side. This is a bit misleading. What it is actually doing is preventing any audio coming in over that port from being output from the line-out port. In a nutshell, it comes in (and gets recorded), but doesn’t go out. This allows me to:

Is this a great way to do things? Probably not. Are there better ways? Probably. It works for me, though. It allows me to have separate audio tracks for each of us, which means I can process the audio differently for each of us (there is more “clean-up” that needs to be done on Julian’s than on our own, mostly just due to it being over Skype).

Right now I am outputting to a computer running Ubuntu, which itself records into Audacity, the same as on my Windows XP machine. In this particular case, the OS on CPU #2 is completely irrelevant… it just needs to record whatever I want to send to it.

You might still be asking how I line up my own claps on both audio tracks if I don’t record myself on CPU #2. Easy. I temporarily “un-mute” that line-in on CPU #2, so I’m recorded on both tracks. Once I clap, I just turn it off and it’s back to Julian by himself being recorded on CPU #2.

So let’s get back to equipment. After abandoning crappy headsets for an episode (or two; I don’t remember), I was off to RadioShack. I ended up getting their more basic equipment, which worked perfectly fine for a while. In fact, it still works, but we’ve since eclipsed the sound quality by miles.

I started out with the RadioShack 4 Channel Stereo Sound Mixer ($30). It’s an incredibly basic little mixer that has four 1/4-inch inputs with their own individual volume controls, two sets of RCA inputs, and one set of RCA outputs. I have never really used those inputs, but the output goes from the RCA-to-1/8-inch (standard headset) adapter, which would be plugged into the line-in on CPU #1. For mics, I bought a bunch of their cheapest unidirectional dynamic microphones (~$20-30; similar item). Since everyone was recording into their own mics, unidirectional seemed the way to go (recording from just one, head-on direction). I eventually purchased their cheap omnidirectional microphone ($30), but never did much with it. 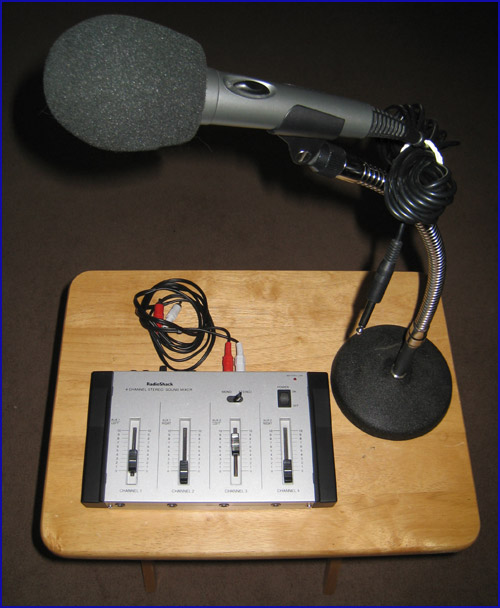 That stuff worked for us for… well… I don’t even remember. Quite a long period of time. Maybe two years…? With a combination of tweaking levels and working with other software (things like Levelator), I was able to get it sounding halfway decent. There was a huge room for improvement, though, and once I realized we were actually serious about this, I decided to upgrade equipment.

To this day, though, I still use their desktop microphone stands ($11) and gooseneck microphone extensions ($8). I also have their standard “Heavy Duty Microphone Stand with Cast-Iron Base” ($28), which is mostly used for playing Rock Band, though we also toss Jeff’s mic into it (since his mic doesn’t use a shock-mount like the MXL 990s). Definitely time to upgrade to some boom stands, though. Anyway…

When it was time to upgrade equipment, I figured that since I didn’t actually know the technical ins-and-outs of audio, I should get some quality material, but not go completely overboard. After doing a bit of research, I ended up with the Behringer Eurorack UB802 ($60) for a mixer, and the MXL 990 condenser microphone ($50-70). I am able to get a really nice sound out of these, which is leagues ahead of anything I was able to get out of RadioShack equipment. 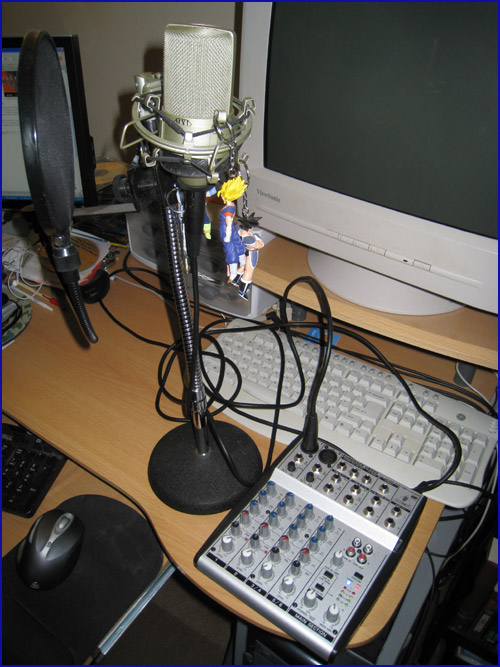 That only covers me, though. What about Meri? What about other local guests? Well, I suppose I could have gotten the next step up with the Behringer mixers with additional XLR inputs for mics (I actually did get the 1202 for work earlier this year, which is great), but we have been able to manage. I tend to end up with Jeff’s microphone here a lot, so if it’s here, I toss it over to Meri (or I have another MXL 990 sitting around, which also works). For the record, Jeff has a Shure 8900 dynamic microphone ($50).

Yep. For right now, if I have three or more people locally recording, I use a combination of the Behringer and RadioShack mixers. The RadioShack mics go into the RadioShack mixer like always (and up to a volume of about three or four), which then gets output as a whole over to the “Tape In” on the Behringer mixer. That can allow me up to six people locally recording with their own microphones, though this is not an ideal situation. Any more than one extra mic starts to really contribute to extra noise, which is a real pain to deal with cleaning. 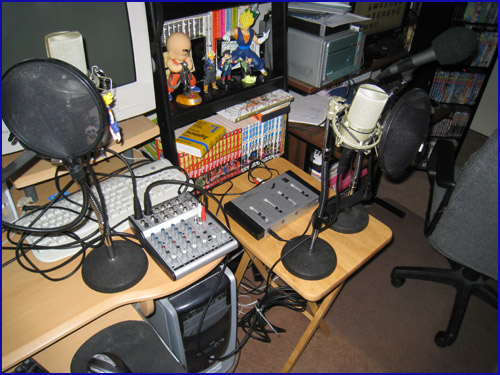 So that basically takes us up to today and how we record shows. I do all of my recording into Audacity, and use a combination of its own noise removal filter and Levelator to balance out shows. I actually piece together segments with their bumper music over in Adobe Premiere, since I like the easy drag-and-drop of the timeline more than trying to do it in Audacity.

My typical Daizenshuu EX workflow looks something like this:

There’s still so much for me to learn and things I specifically want to learn about, but it’s pretty daunting. I’d love to upgrade to a bigger mixer at some point. I would also love to learn about things like noise gates and compressors (I’ve had my eyes on the DBX 266XL Compressor Gate for a while; ~$120). I’ve heard Rym note a few times that for podcasting purposes, dynamic mics are better than condenser mics, so I’d like to investigate that a little more (I do think that my mic picks up more than it should and then messes with the balance a little bit; I also can’t wait to move and not have things like our current loud refrigerator always being picked up). I’d also like to move toward non-analog input. I’ve played with the Behringer U-CONTROL UCA200 USB Adapter (UCA-202; $30 sold separately) that came with the 1202 mixer, and it does help cut out a tiny bit of noise. Unfortunately, the USB interface seems to take over and negate what I’m used to doing with the muting input going to CPU #2, which totally throws off any Skype recording I would need to do.

So that’s basically it! If anyone’s interested, I’d be more than happy to further explain how I do things, but I have to follow that up by saying that I literally have no idea what I’m doing and continue to be learning as I go along. I’d love additional suggestions and clarifications from people if you have anything to offer!

So You Want to Improve Your Podcast? When I started my podcast back in 2005, I had absolutely no idea what I was doing; some (myself included!) would argue that I still have no idea … [continue reading]

Jeff and I have streamed our recording of lo-fidelity live a few times. We do so over on my Stickam account through a second computer (my laptop) while his is busy with the normal audio … [continue reading]

Nothing of huge interest to write about here, but if you actually follow along with this blog and/or me in any significant way, you might care at least a little bit. I have been mentioning … [continue reading]