Despite saying in my initial entry that I would be writing “semi-professional but non-corporate” material, I am going completely against that with a list of my Top Ten Pokémon. Wouldn’t this fit in better on that new video games podcast with conversations and top ten lists? Somehow I doubt either Jeff or Andrew would be down for that, so I’m all on my own. As a mid-20s Pokémon quasi-wannabe-fan, I don’t have many outlets to write this kind of stuff…!

My affection for these characters comes from a variety of places, but primarily (1) playing the games, and (2) watching the anime. There are some sub-sectors to those (the movies in Japanese, for example), but it should all make sense as you read through.

I’m a fire-type starter (Gen 1: Charmander; Gen: 2: didn’t play; Gen 3: Torchic; Gen 4: Chimchar), so that provides some slight bias right from the get-go. After some crappy character designs in the third generation of games, it was nice to see a return to simplistic-but-effective with the three new starters. His evolutions are neat, too (especially Infernape), but there’s something about the initial critter that I love. I absolutely adore his incarnation in the anime where he’s so emotional with Ash/Satoshi (crying, laughing, etc.) after having to hold back those emotions with the previous “owner”.

Lapras has such a sleek design. I was a big dinosaur buff as a kid, so that probably contributes here, too. Lapras was incredibly helpful when playing through the first generation, due to the great application of Surf (and Waterfall, to a degree). I don’t think I have a whole lot more to say about Lapras, other than that it was super-fun to try and get a great picture of the group in Pokémon Snap. I just picked up the “Orange Islands” boxset for a project I’m working on, and I’m looking forward to checking out all the footage with Lapras.

Here we have another favorite pick due to its use in the first generation. There were two of them blocking the way, and I was sure to capture both of them. Snorlax’s power was absolutely essential to me in going through the rest of the game. I also really liked Snorlax in the anime with that hippie dude and the flute that would wake him up for eating.

Adorable. The name puns are in full-effect here, too, and I get them in both languages! I love his attitude in the anime (sunglasses and all; first TV episodes I saw in Japanese). I’m finding him my favorite part of the Pokémon Trainer character in Super Smash Bros. Brawl, too… he’s fast, agile, powerful-enough, and fun to spin all around the stage. The character’s voice is fantastic both in English and Japanese, and I just want to scoop him up.  Let’s also not forget that he seems to be a yakuza leader.

I’ll admit that the main reason I love Suicune is because he was the first real difficult legendary I caught (not counting Mewtwo and the three birds). In fact, I was so excited, I took a crappy picture on my camera phone and sent it to my then-girlfriend/now-future-wife. No. Seriously. I did. Look. 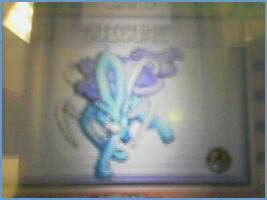 I later saw movie four and was happy to see it play such a large role. Suicune is just a really neat design, and I don’t know that I have anything else to say about it…!

Lucario is bad-ass. He seems to be the modern replacement for Mewtwo in a variety of ways (understanding human speech and can communicate with humans; playable character in Super Smash Bros. Brawl seemingly instead of Mewtwo). He has a great design… I really like the humanoid ones a whole lot, and the spikes are a cool touch. Movie eight was the second one I saw in Japanese, so that also plays a big role in why I like Lucario so much. Daisuke Namikawa did an awesome job in the movie voicing Lucario; I’m also a big fan of him as “Koyuki” in the anime BECK, so additional admitted bias.

Crazy looking giant dinosaur in charge of space? Sign me up. I was probably going to get Pearl, anyway, based on the version-exclusive Pokémon… but this dude clinched it for me. I think I actually used my Master Ball on him since I didn’t realize how many end-game legendaries there would be. Thankfully, I’ve been able to capture them all without too much difficulty. Palkia’s (and thus Dialga’s) music in the game is pretty awesome, and it was great to see Spear Pillar show up in Super Smash Bros. Brawl with its respective characters and themes. While I didn’t particularly love Palkia in movie ten (kind of a wuss, if you ask me…), he’s still a total bad-ass and I look forward to seeing what he does in the eleventh movie onwards.

Yeah, it was the first plushie I got, too. Sue me.

Not a whole lot to say. The true mascot of the series, Pikachu is adorable and endearing as Hell. Ikue Otani creates the most squee-er-ific voice I’ve ever heard in my life… so much so, that it’s actually somewhat frightening to see her do it. I love the character to death, though, and it is what prompted me to first get Pokémon Yellow on the Game Boy. A cliché choice, but an appropriate one.

Like I mentioned earlier, I’m a fire-type starter. Charmander was my man, but Charizard was THE man. His attitude progression in the anime (belonging to Ash/Satoshi) was a little strange… we never quite figured out why Charmeleon suddenly acted like an ass, but whatever. Again, it’s another one so high on my list that I can’t really figure out what to say for him… but I love him to death. He got me through a bunch of pinches in the first game, and even the jerk that he is in the anime would never let his owner down in his own true pinch.

If a grown man in the real world could truly love a morally-conflicted, identity-confused fictional biological/genetic experiment from a fake world meant for Japanese children… that would be the case with myself and Mewtwo. The first movie was my first experience with the Japanese version of the show, and I was totally enthralled with Masachika Ichimura’s performance (despite him not doing a whole lot of other roles). In fact, I loved that voice/character and the music from the movie so much that I signed up for eBay (I don’t remember what year this was… probably 1999 or 2000) and my first purchase (from what I remember) was the soundtrack / drama CD for the movie. 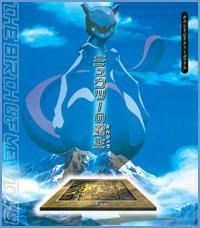 It came with a book detailing “The Birth of Mewtwo”, the two discs… oh man, was it ever awesome. The samples of the vocal performance contained on the soundtrack just made me drool. I think I paid $60 for it, but it was well worth it.

While I never got far enough in Yellow to capture Mewtwo, he was my main goal when I picked up Fire Red. I made sure I got him, using my Master Ball despite knowing I might need it for additional legendaries (man, Suicune was a pain to get without the Master Ball…). He was the first one I ever leveled up to 100, and may actually be the last since I don’t see the point, not doing battles with people and all.

I think that’s actually doing to do it. I’ve been trying to waste a bit of time so I could stay up to update with the latest Daizenshuu EX podcast, and since we’re closing in on midnight here, the job has been accomplished. Big thanks to Bulbapedia for unknowingly letting me steal their little images for my own purposes. Maybe next time I’ll write about something interesting to people other than me.

OK, so technically Jeff has already played it (and you heard all about it back on episode two). However, I had never actually played beyond the first five minutes (I thought a full hour, but … [continue reading]

People seem to want to hear my thoughts on video games, or at least my experiences with what I have been playing… so hey, let’s just dive right in and pretend it has not been … [continue reading]