I certainly do not claim to be a podcasting expert by any stretch of the imagination. Even after doing this for a bit over four years now, I still run into random tech problems and sound quality issues that I can not always perfectly troubleshoot, though I do the best I can.

The spontaneously-combusting XLR cables are not my fault, though. I swear.

I know it has been well over  a year since the last podcast episode (if you could call it that) for this blog, but I made it a point to say that shows here would be when I have something to say, and I would not do them just for the sake of doing them. That being said, I actually have an idea for a show to do. It is incredibly “meta” (and specifically about podcasting), but that is OK with me if it is OK with you! You have read before how I have upgraded equipment over the years, and what my typical workflow is for producing a show. That was a while ago, though, and a few things have changed. 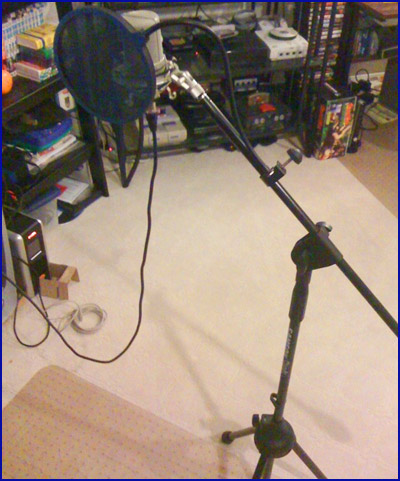 I really want to do an updated version of that, but more from the audio end of it rather than a text-and-images description. It fine and dandy to talk about it, but what does it all sound like…? Sure, you could compare the earliest episodes of Daizenshuu EX‘s podcast to some of the most current ones, but that would be a pain to do.

What I am planning on doing is recording a few segments, under very controlled (read: “ideal”) situations in terms of surroundings and acoustics, to showcase exactly what my different microphones really sound like, and how that makes a difference for the listener. With myself more than anyone else you will be able to tell how upgrading and tweaking a few things can make a huge difference — it’s no secret that my regular male co-hosts Jeff and Julian have amazing, deep, booming, perfect radio voices, where-as I have to over-compensate.

Not that I can’t form a coherent sentence, or anything like that. Oh, Hell… if you’re reading this blog, you know what I’m talking about!

In a nutshell, I have a pretty good idea of how that part of the show will go. You will hear the different types of mics, positioning from them, what the most basic of software can do to help with it, blah blah blah. What about the other side, though? Is there anything about the behind-the-scenes production that you are interested in learning about? Not necessarily the tech behind things… but the research, methods, reasons, schedules, time-sinks… that kind of stuff.

In general, is there anything about any of the shows I am involved with (Daizenshuu EX, lo-fidelity, vgconvos) that you are curious about? Why we do the things we do and how we do them? Let me know! I will probably pull Jeff on that later segment to answer with me, because he’s just such a swell guy.

My buddy Kevin has asked me a couple things about my podcasting equipment lately, so I decided it would be helpful to a few people if I just put it all out there. In the … [continue reading]

Jeff and I have streamed our recording of lo-fidelity live a few times. We do so over on my Stickam account through a second computer (my laptop) while his is busy with the normal audio … [continue reading]