So my 360 is finally back. Insert huzzah upon huzzah here.

They tried delivering it on Tuesday to the future-in-laws’ place, but no-one was home, so right back on the truck for the next day it went. Thankfully, someone was going to be home all day the following day, and it was indeed scheduled for re-delivery the next day… so I basically refreshed the tracking page all day to make sure it got there on time. Of course, just like the last package I tracked, it didn’t show up as being delivered until half an hour after the fact… long enough for me to get an e-mail confirmation from “home” saying it was there before UPS could :P.

Opening up the box it came in (which was identical to what it went back for repairs in), there’s not a whole lot to speak of. System’s in there, papers in there, card for a month of Xbox LIVE, etc. 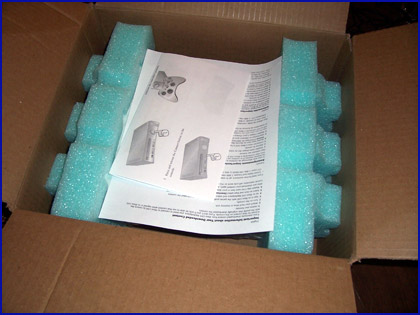 I didn’t do my analysis as well as I should have. I’m basically blind. I wanted to know if the system was a replacement unit or if they actually repaired it. If I actually read the papers that came with it, I would have immediately seen that it was indeed a replacement unit. The instructions also give you the process on how to “re-license” all of your Xbox LIVE downloads (more on that in a second). 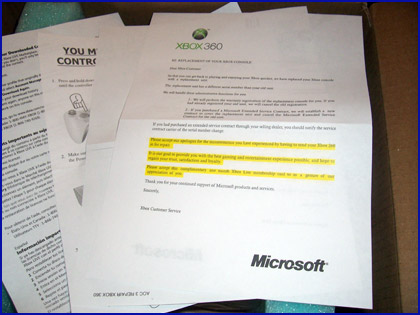 What should have tipped me off was an entirely new console serial number. Of course, that’s not something you immediately look for… Or is it…? 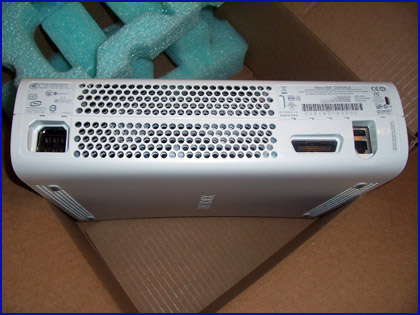 I’m not quite sure what this says about the problem I had (initially detailed back here). Does the problem go so deep that they’d rather just give me a whole new system? I guess so. I really think someone should make a site all about the green splotchies problem. I wish I had the initiative to do so. You, over there. Yeah, you. Get right on that.

I couldn’t just crack open Rock Band 2 and play, though. Nooooo, sir. Since it was a whole new system, and Xbox LIVE content is tied to the hardware (in addition to the gamer-card/name), what you have to do is re-license the content for the new hardware. This means you go to your “Download History” and click “Redownload”… on every single last one. Every. Single. Last. One. OK, so you don’t have to do it on demos if you don’t really want those anymore, but for things like actual XBLA games and add-on content that you would like to be able to access either offline or by other users (gamer-cards/names) on the console, you absolutely have to do it.

For material that’s sitting there on the hard-drive, it doesn’t actually re-download it. What it appears to do is check and see if that content’s there, and if it is indeed there, just re-apply the new license to it (the download will hit 1% and then just be done, regardless of the file size). If there has been an update to said content (for example, I think one of the Police songs/packs I had downloaded had a fix applied to it), it actually will indeed re-download the whole thing again (presumably replacing it on the hard-drive, rather than downloading a duplicate).

So I basically went through that process for all my Rock Band downloads (which is… uhh… a lot), and then all my XBLA games (which aren’t a lot, but enough to be obnoxious).

I then moved on to doing the whole Rock Band export thingie from the first game, which lets you play all (well, 55 of the 58) songs from the first game right in the second game. That took a while, so I ironed some shirts for work while it did its thing.

Then I downloaded a whole bunch of songs I’ve missed in the meantime, which ate up some more time (still ironed shirts).

By the time I was ready to finally use my (new) system, it was 10:30 pm, and I had to get my rear end to bed for work the next day. Played through “Hands Down” on expert guitar one time through, mostly just to say “nyah-nyah!” to the console.

So the big guy is back. I wonder if I’ll ever actually get back to DragonBall Z: Burst Limit, or if it’s just a lost cause. If I’m going to play a fighting game, I’m going to pop Soul Calibur IV over in the PS3. Regardless, it’s wonderful to have it home.

Hopefully it won’t die one week after my one-year warranty, again, with a problem Microsoft refuses to publicly acknowledge and fess up to. Grar.

Before I get into the meat of this post, please note that when episode three of the podcast first went up, it accidentally had a random 10 seconds of silence before we read e-mails. It … [continue reading]