It’s no surprise that the pandemic hit us all in different ways. In this article I will share an in-depth summary of the last year and a half and all the emotions and life events that led up to the creation of this recipe…

…ahahaha nah. I’m not going to do that to you. Wow, you should have seen your face just then. Priceless.

For real, though, it was a decent time to experiment with drinks. The “infused” trend seems to be here to stay (and a quick search shows that CBD-infused drinks are the next new hotness because of course they would be), but for now let’s just work on something easy, something simple, and something affordable that you can do at home.

Here is literally everything you need to easily make your pecan-infused bourbon at home:

Only a few ingredients. Simple instructions. Easy clean-up. Let’s do this!

Just Give Me the Short Version

Cool. 750 ml bourbon of your choice (something you already like, and something you also don’t mind altering the flavor of). One cup of regular pecan halves. Roast the pecans at 400 degrees Fahrenheit for 15 minutes. Let them cool for 20-30 minutes. Put the roasted pecans and the bourbon in a container, cover it, and wait for three to five days. Enjoy. Repeat.

Don’t waste your time cracking the shells on the big boys. You want regular pecan halves; not salted, not candied, not pre-roasted… just regular pecans here. 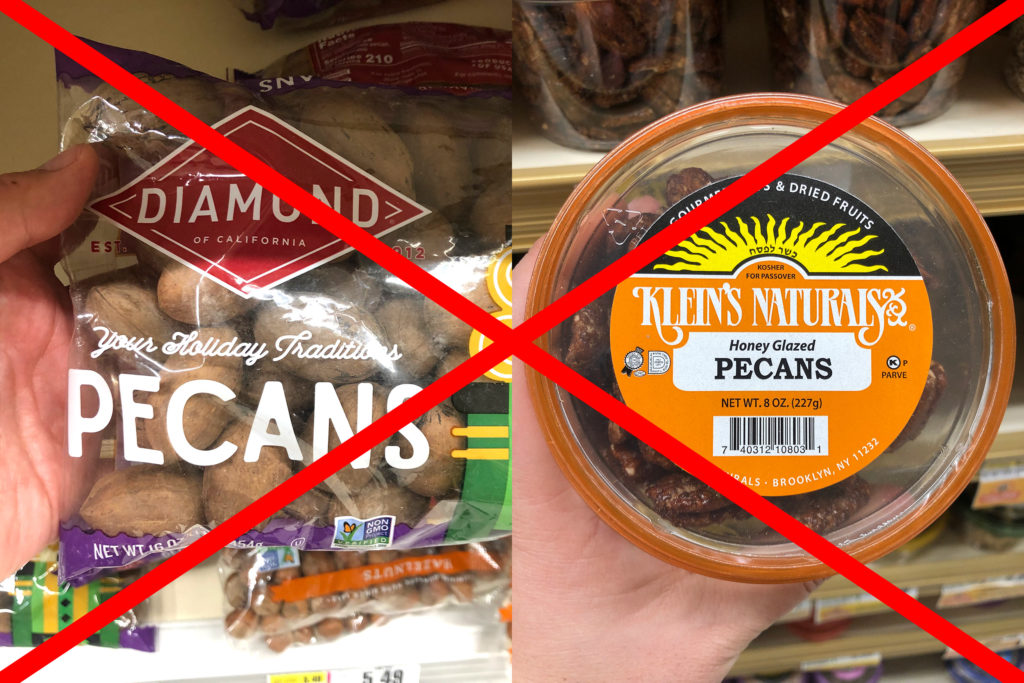 The regular plastic bin or bag of pecans at your local grocery store is totally fine; that’s what we used each time we’ve made this recipe. You’re looking at probably $6-8 depending on the amount here. 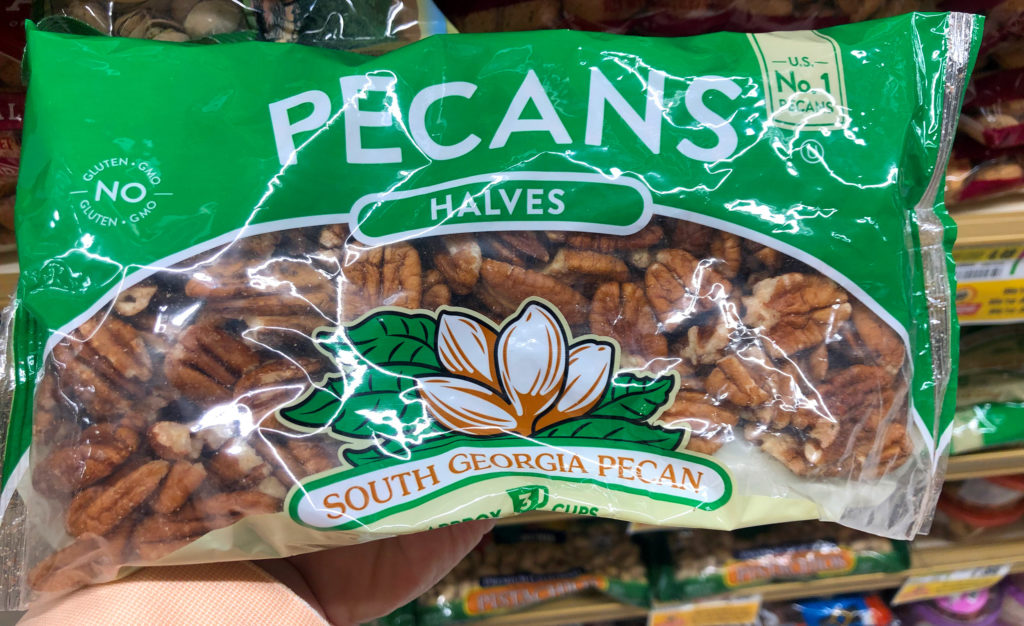 For the purposes of our recipe, you will need 1 cup’s worth; that’s going to be around 4 ounces if your packages are labeled that way. You will likely be purchasing in 6- or 8-ounce packages, which means you’ll have some extra. It’s a good snack to have to while you wait a few days! Or to make a second batch next week…

The sky’s the limit, but let’s be reasonable here. We are going to be altering the taste of the bourbon a fair amount, so choose something you already like, but something you also don’t mind adding quite a bit of “oomph” to.

The default for me here is Knob Creek, regular nine-year aged bourbon. Woodford is also a decent choice. Something around this price range ($30-40ish) holds up against the pecan while still letting in the new flavor you’re introducing. It’s a bit of a balancing act. Don’t cheap out on it, but also don’t go nuts here. 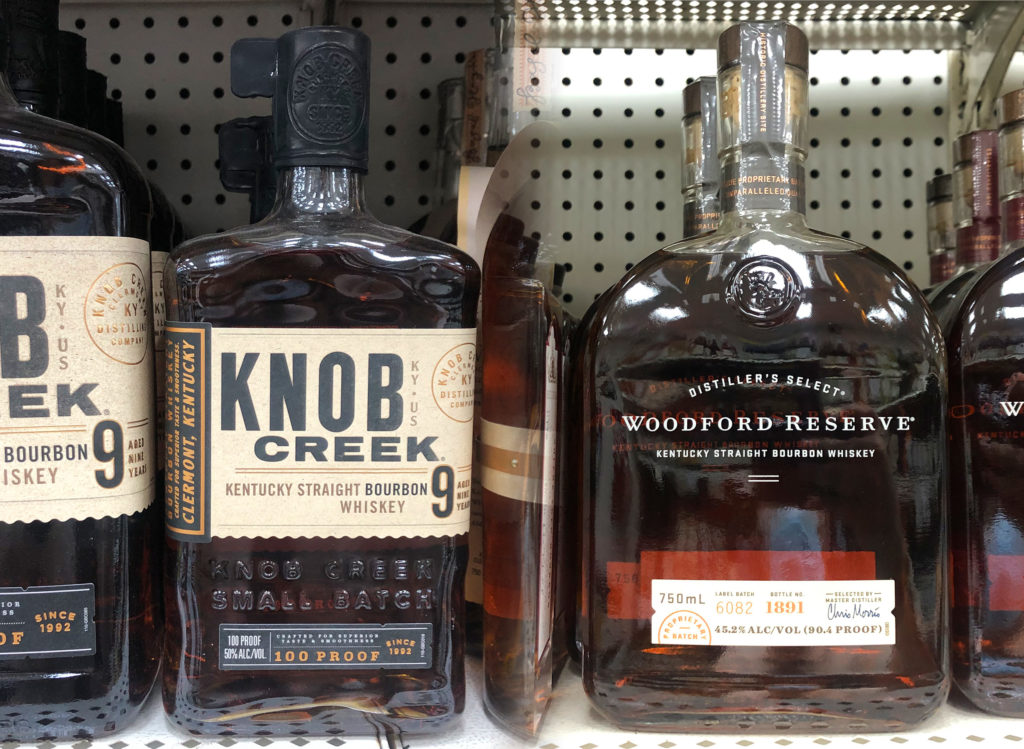 Measure out one cup of pecans (assuming you’re going to combine it with the full 750 ml of bourbon). 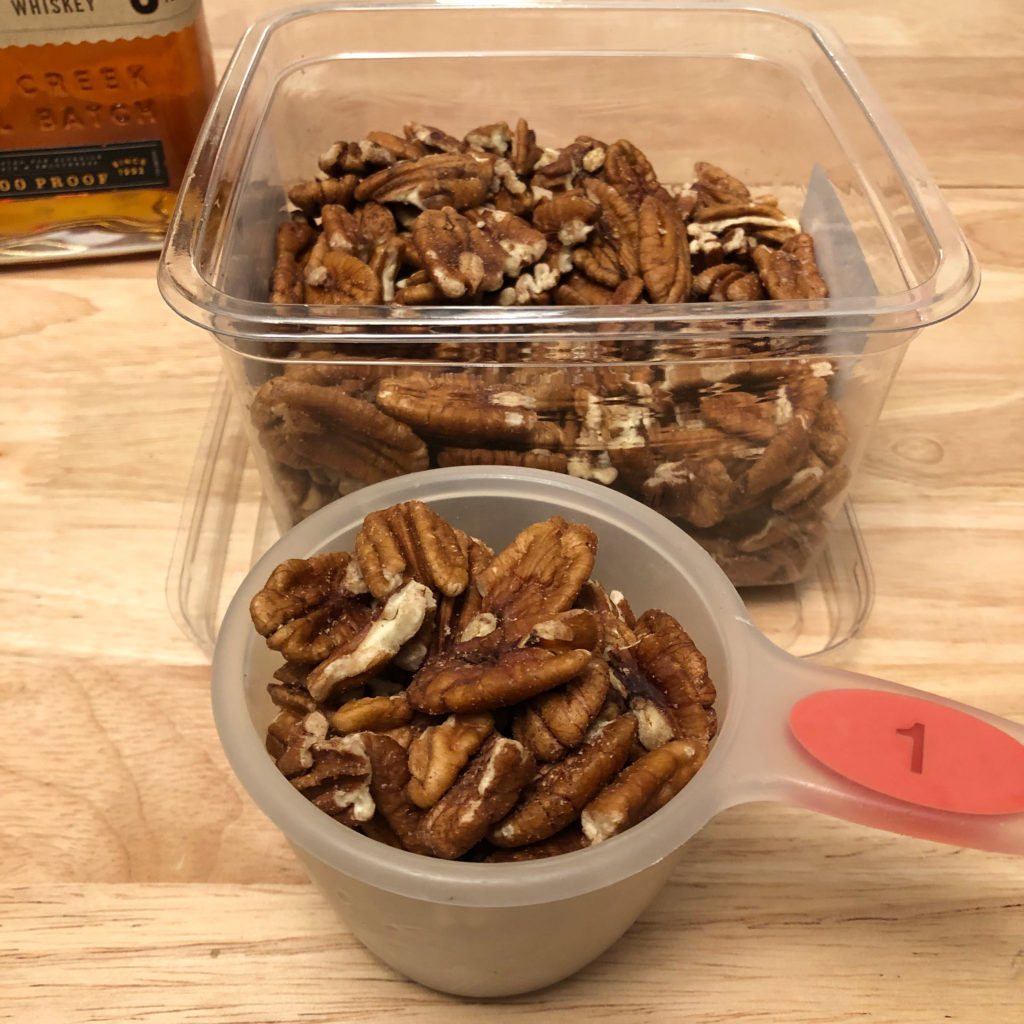 Preheat the oven to 400 degrees Fahrenheit (that’s about 204 Celsius I guess?). Spread aluminum foil across a baking sheet. Don’t use any cooking spray or olive oil; the only flavor you want is the pecan. Spread in a single layer, and roast the 1 cup of pecans for 15 minutes. (Other recipes out there say 10-15; I’ve found that the extra time, if nothing else, makes the house smell better, but don’t go above 15 minutes.) 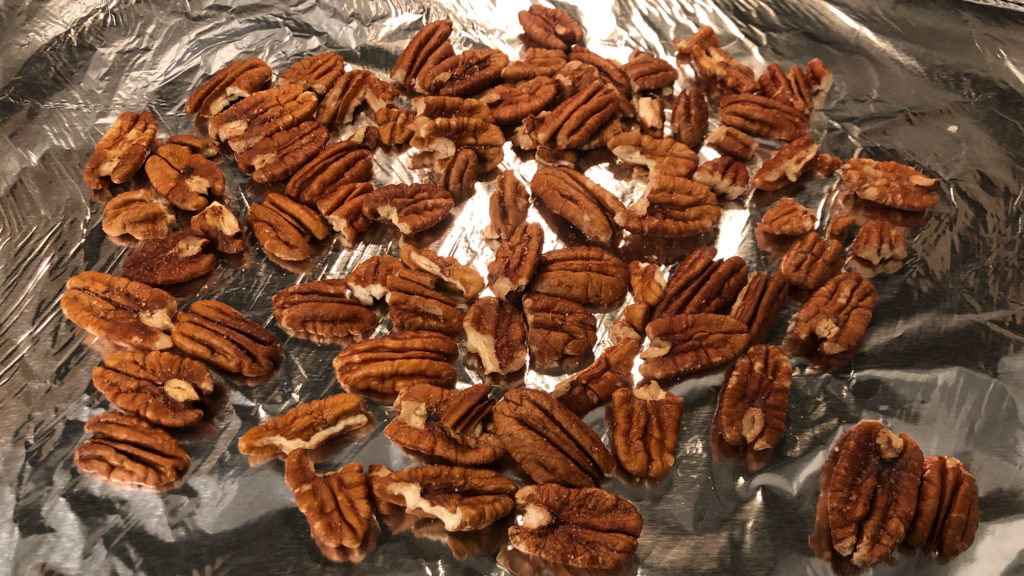 Take the pecans out of the oven and let them sit for around 20-30 minutes. Eat a couple. They’re great. 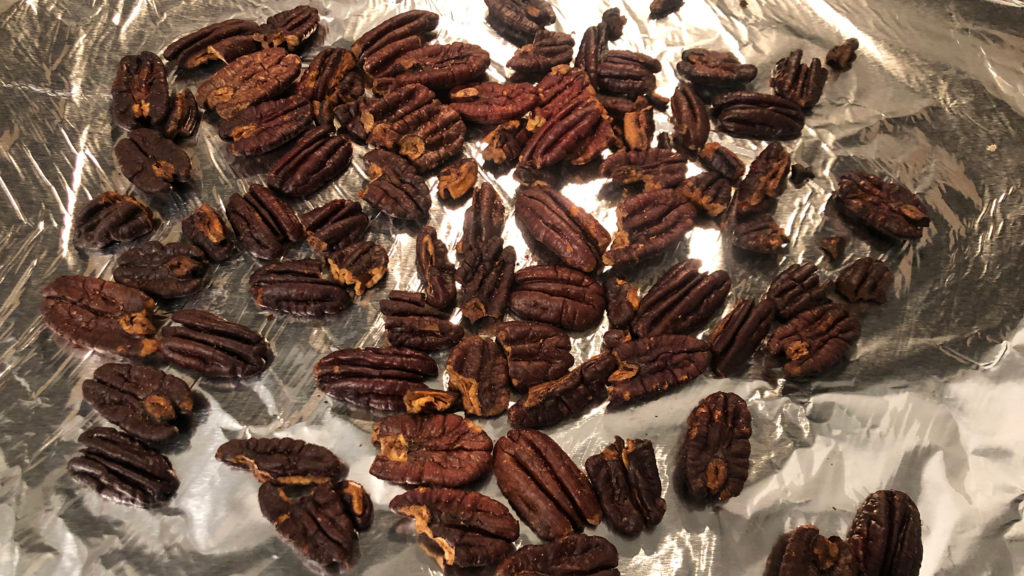 Step 4: Adding It All Together

The first time we made this recipe, we tested it with a much smaller amount, soaked the pecans in a glass bowl, and then four or five days later strained the pecans out and transferred the bourbon to a carafe. This is fine, especially if you feel like you’re not going to use up all the bourbon in a “timely” fashion (“timely” here being different for everyone…). 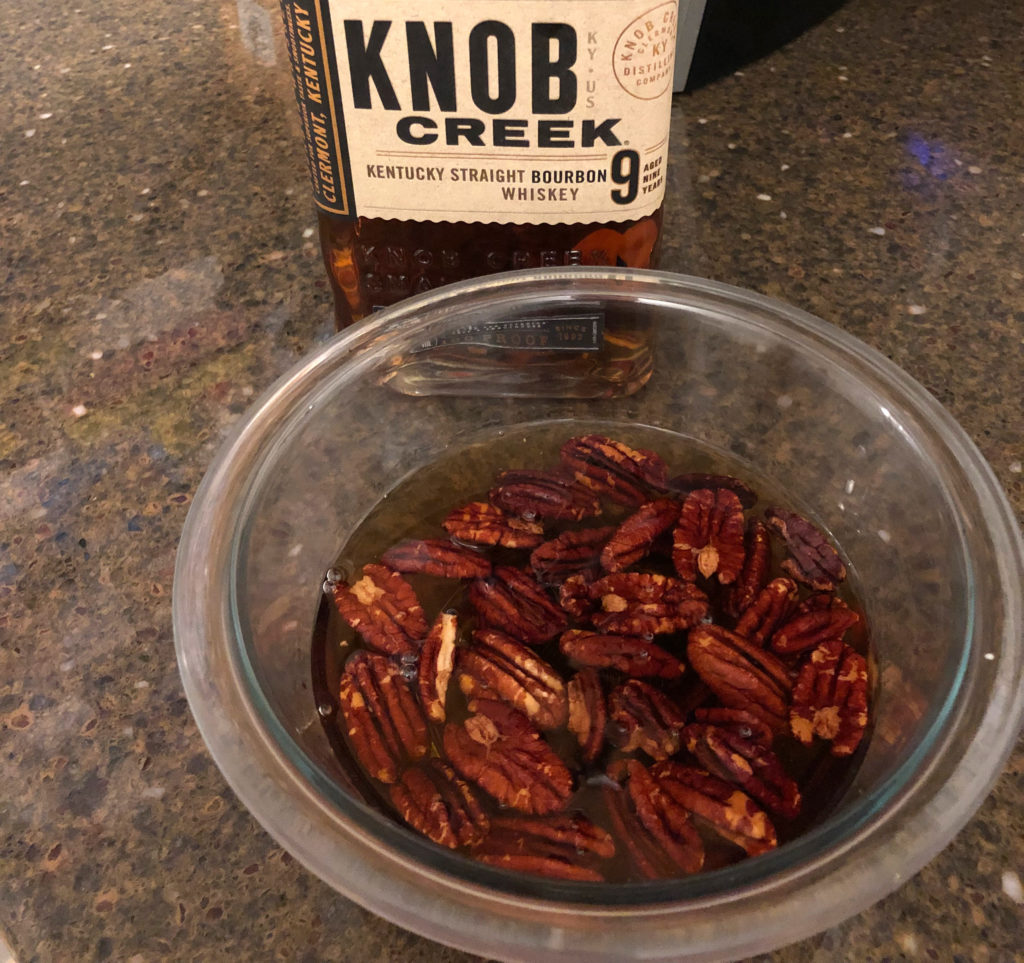 That said, these days we prefer to just dump everything straight into the carafe and keep it there, beginning to end. There is far less to clean and manage this way… and you’re going to like it so much, that it’s not going last in there for very long. 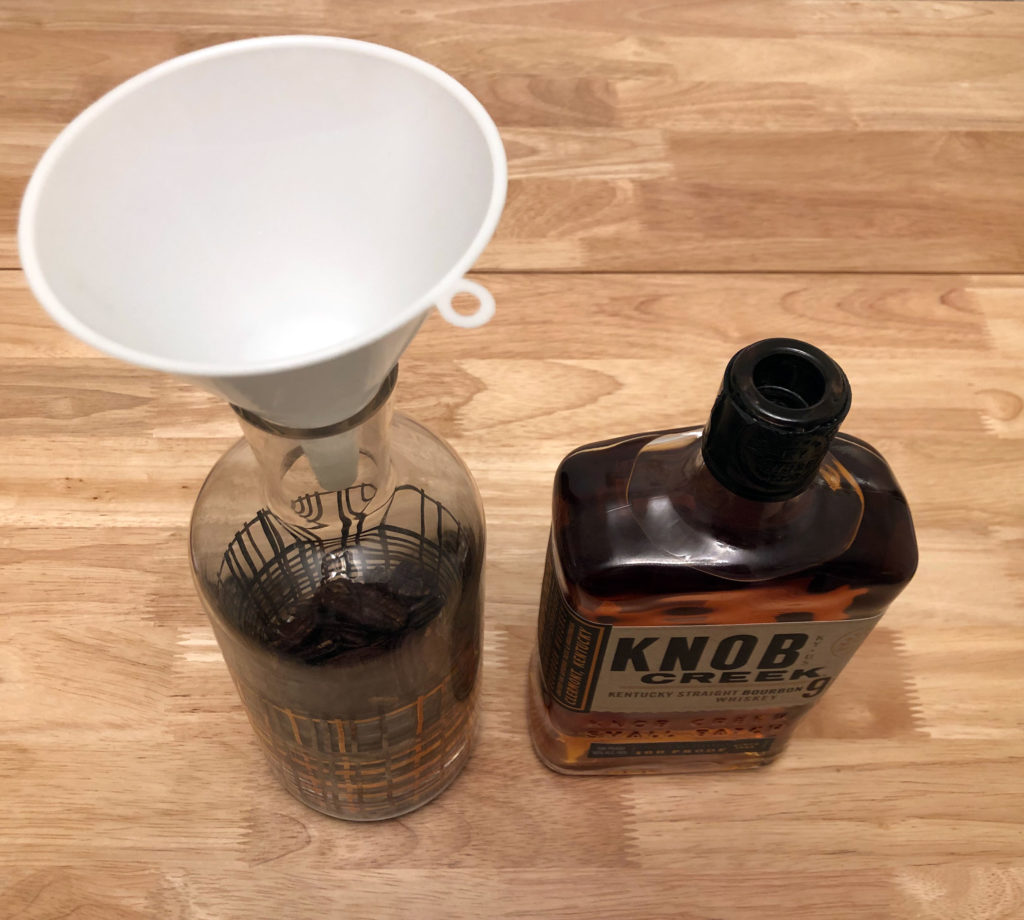 I used the Crate and Barrel “Mingle” decanter here; it looks like the “Jaxson” ($50) is their current version. These decanters hold ~32 fluid ounces, which is a perfect amount for the bourbon and the pecans.

So pick your container of choice, dump the toasted pecans in, dump the bourbon in, give it a stir or a swirl, cover it, and let it sit in a cool place.

Step 5: Wait and Watch Your Work!

You want to keep it stored away for three to five days. I’ve found three is the minimum to get that bite you’re looking for, and anything thing over five a bit too much.

Check out the color change over time! It’s pretty awesome.

You may see other recipes out there telling you to toss in a vanilla bean. I’ve never done that. I have no idea how it affects the flavor. I have no desire to do it. If you decide to go this route, let me know how it works out for you. Godspeed.

I just don’t think it needs anything else. It’s already perfect. 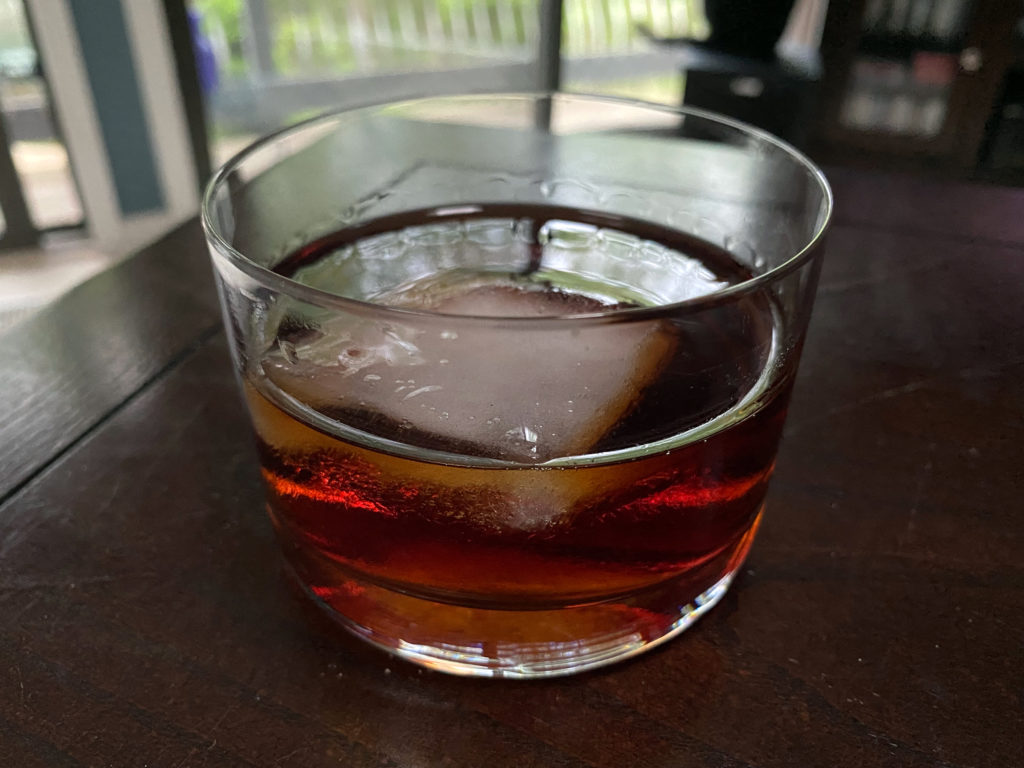 To Mix or Not to Mix

Can you make an old fashioned with pecan-infused bourbon? Of course you can! Should you? Well, that’s a personal choice.

I’ve done it, and it was fine, but the sweetness of the sugar and cherry kind of act as a cancellation to the stronger pecan flavor. If you’ve gone to such lengths, why muck it up? The style of bourbon you pick may already have hints of vanilla and caramel anyway, like the aforementioned Knob Creek.

I’m not above a cocktail, though, so if you want to make a cocktail with it, knock yourself out. I find it actually goes great as a replacement in a Jack and Coke, more so than as part of an old fashioned.

Personally, I think the pecan-infused bourbon is best served with a single large ice cube, and nothing more.

Can I Eat the Leftover Pecans?

Yeah, do it! I think they’re pretty good for a day or two after the bourbon’s gone. Your mileage may vary. 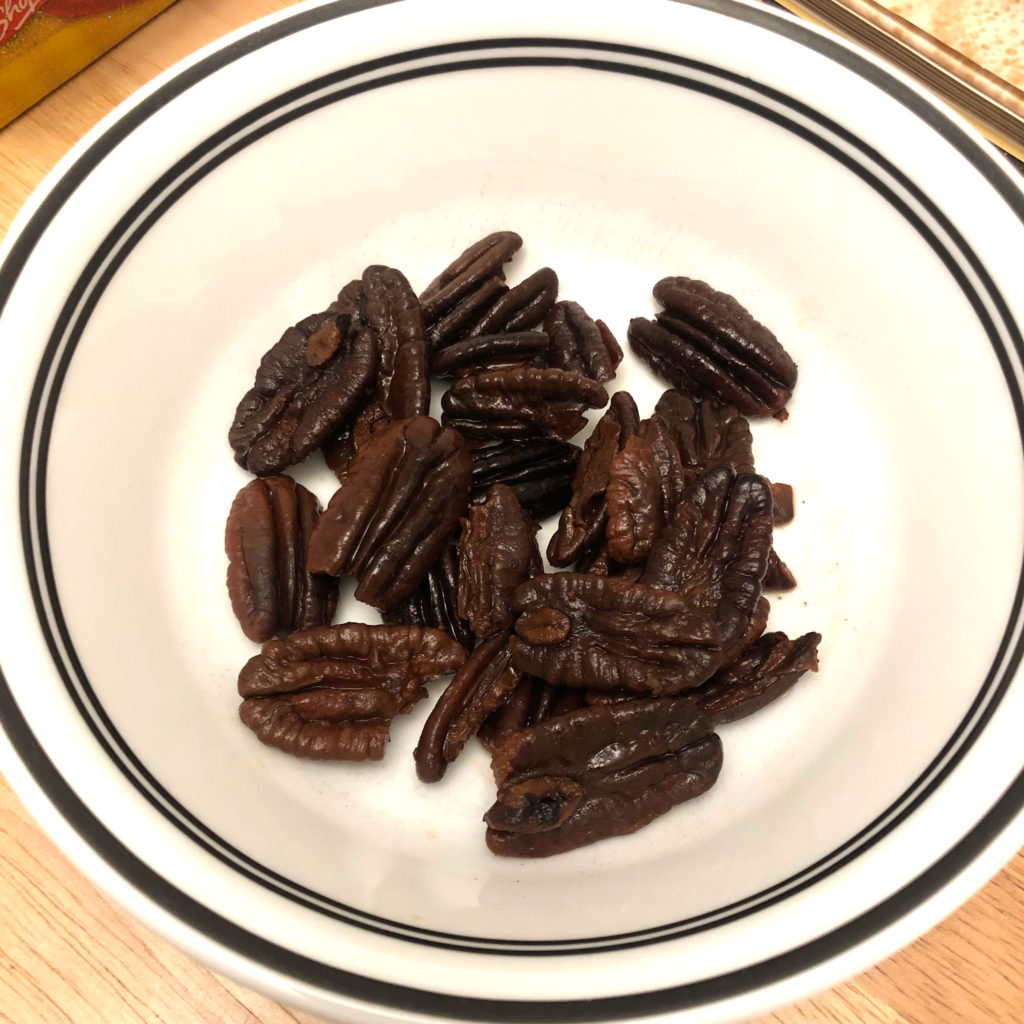 My dude, it’s only a couple minutes of work, 15 minutes of baking, waiting half an hour, and then drinking a few days later.

Double pour of bourbon on the rocks (preferably just a couple small ice cubes or one large cube; don’t be that person with a full glass of ice). Drop three or four pecans in. Wait a couple minutes. Enjoy the quick and dirty version, which hopefully whets your thirst for the real deal.