Nothing of huge interest to write about here, but if you actually follow along with this blog and/or me in any significant way, you might care at least a little bit.

I have been mentioning for a while how a new mixer was on the horizon. Since (I think…) Episode #0112 of the podcast over at Daizenshuu EX, I have been using my trusty Behringer Euroback UB802 (which isn’t available anymore, but the Behringer Xenyx 802 is basically the exact same thing). It has certainly sufficed up until now. I have not been completely happy with it, though — Behringer stuff gets the job done, but you will occasionally be reminded why it costs so little. My own mixer once decided that it was only going to output sound in the left channel, only to have the right channel return to full functionality a few months later. The Xenyx 1204 that I got for work now doesn’t want to output audio at all (which is why my little guy became somewhat well-traveled).

I knew I wanted to upgrade to something that had at least four XLR inputs, which would finally get rid of that pesky situation where someone comes over and I suddenly have more people than inputs on the main mixer, resulting in a totally ghetto daisy-chain. I also wanted something of a higher quality, of course. This led me to the Mackie 1202-VLZ3. A solid mixer from a solid company with an appropriate amount of features = sold.

The big guy came in last week, and I love him to death: 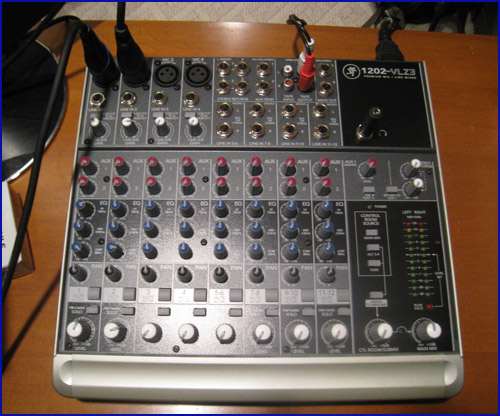 I have yet another boom stand on order, so once that comes in and things get fully set up, I might consider doing a “Version 3” of “My Podcasting Setup” (which was last updated just about a year ago). The basement “studio” has been awesome, and we just decided to put some shelves in, so it’ll get even nicer. Hurray!

Speaking of that there main show that I do pretty much every week, we get our e-mails and forum posts, sure… but I also like to occasionally step outside the internal comfort zone and see what other folks have to say about it. Just about two years ago, I posted up a couple choice quotes I happened to dig up, so I figured it might be worth it to do that again.

I really just wanted to share one particular bit of feedback, though. Upon clicking through to the person’s contact information, it didn’t seem that they are all that active (and this particular post was many months back), so rather than directly contact them (which I may still do), I figured it’s out there and public anyway, so I might as well publicly respond to it. Through the normal course of surfing + Google Alerts, I came across this thread on fanfiction.net where someone replied to a conversation about DBZ fandom and communities:

Having listened to vegettoex’s podcast for years until it boiled down to ‘what’s new in your life and lets recap a single volume of manga!’ sort of TL;DNL, I can say yes I’ve been to the forums. Not sure why you assume people haven’t been there as he’s one of the few big sites left from yester year. And while they are active in near 4chan trolling, gifs, bad AMV(bring back the good stuff please?) fandubing and the occasional decent debate, its still vanishing. Even there.

For starters, we make it a huge point to not excessively talk about ourselves. The introduction to each episode does indeed have a little “Hey, how ya’ doing?” segment, but it’s always a part of a larger “What new things came in…” or “What’s new on the site…” that is at least somewhat relevant to the DBZ-loving listener. I will certainly concede that much (much much much) older episodes may have had a little bit too much of the personal talk up front, but even then it was nowhere near what this post would lead you to believe.

The “Manga Review of Awesomeness” is a once-monthly topic. Its purpose was to allow new folks to follow along with a group of fans and their podcast about a franchise that has a ton of history that they might not be completely up on — they are “timeless” episodes that anyone can go back to at any time. Based on the feedback from our big survey, it also happens to be the most-enjoyed type of topic by a wide margin. “Majority” doesn’t mean “entire audience” though, so I can understand how there are folks who don’t care for it — that’s why it’s only once a month! I know for a fact that there are a bazillion other types of topics intermixed on a weekly basis, and they are purposefully arranged so that at least once a month there is a type of conversation (in-universe, product review, manga, etc.) that folks of a particular segment of the fandom can latch onto.

Yes, I run a very calculated show. I read and listen to every bit of feedback I can get my hands on. I’ve gotten back into the habit of listening to my own show even after I’ve edited it for release to critique it. I want it to be the best that it can be, to appeal to as many people as possible… but at the same time have just the right amount of pompous authority to show that we ain’t messin’ around, yo. You want to know something? Information you can trust? Ain’t no other place, bro-dawg.

(Also not entirely sure if they are referring to our website and/or forum with that stuff about troll images and such. That’s as far removed from the prison we run as can possibly be described.)

On the other hand, then we get comments like these on the rare occasion which reminds me exactly why I love doing this stuff so much:

Im a relatively new listener who once thought I knew everything about Dragon Ball from watching Toonami…..

I don’t think “thank you” covers it.

So that was a blog entry.

Yesterday I recorded (and today I edited) my first “professional” podcast… that is, the first episode of the new podcast we are doing at my job. It was incredibly exciting. I got to spend a … [continue reading]

Let’s write about something a little more uplifting, rather than the other day’s dive into the depths of internet excrement! Yay! It’s no secret that I love podcasts. They provide an excellent complement to just … [continue reading]