AUTHOR’S NOTE: This 2010 post and accompanying podcast episode was sufficient for the time (barely), but really could use a total re-do… and it’ll get one at some point! We actually know how to record and edit things properly, now!

In the meantime, you should check out the publicly-accessible page for Kintoki on the Kanzenshuu Wiki! At this time of writing (early 2021), the wiki itself isn’t live yet, but we made this particular page accessible so you can get an idea of the kind of insanely detailed nonsense you’re in for.

I was just going to toss this up in the Daizenshuu EX podcast feed, but hey… I have some space over here, too, and I said I would only release podcast episodes as a part of this blog when I honestly had something interesting to say and do… and this seems relatively interesting…

In September 2010, it was announced that Weekly Jump would have a special series of one-shots called “Top of the Super Legend” starting with issue 45 and going through issue 50. Current Jump artists would be contributing these new, short stories… but a certain “legend” of the recent past would also toss one into the mix: Akira Toriyama. A little later on, we learned that the story would be called “Kintoki“, and that was about all we got.

Toriyama’s work, KINTOKI: 金目族のトキ (Kintoki: Toki of the Golden-Eyed Tribe), was the last one of the bunch and released within issue 50. All of us from the extended Daizenshuu EX and Kanzentai communities are big fans of everything Toriyama has done over the years, but beyond comparing DragonBall to his prior works (especially its direct predecessors such as Dragon Boy and Tongpoo), we never have an opportunity to go in-depth about them about on our DB-centric sites. 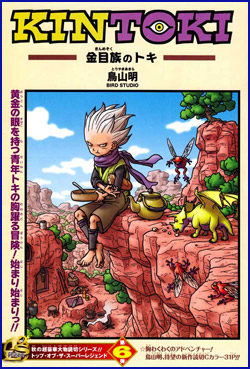 I decided to do a fun “bonus” podcast, and invited on Heath to talk about the new one-shot with me. Much like the “Manga Review of Awesomeness” recurring segment on my main show, what we did was recap the actual story of the manga, and then dove head-first into all sorts of things: name puns, correlations to other Toriyama works, our own thoughts on this new one, etc. It runs around 45 minutes, so it’s a pretty decent length show without going completely overboard (especially considering the one-shot itself is only about thirty pages!). We definitely had a fun time with it, and if you enjoy it and want to hear more like this in the future, let us know! We will probably do it anyway just to amuse ourselves, but it would be nice to know that someone out there actually wants to listen in, too.

Conversation 006: We’re Back With A Discussion Of The Games We Played In 2008

Surprise, surprise! The three of us got together this weekend and recorded episode six of the show, had a blast doing it, and are extremely happy to bring it to you so quickly. We are … [continue reading]

I decided to start up a new category of postings over here on WTF EX. It makes sense to review things on blogs, so that is exactly what I will do! I can’t promise just … [continue reading]