It doesn’t take much more than a good coupon to drive me into game-buying-mode. When I came across Gamestop’s 20%-off coupon for used Gamecube games over at Cheap Ass Gamer, I was all over that. What would I get? Luigi’s Mansion? Maybe another Resident Evil? I kept thinking to myself what some cheap games would be to fill in some embarrassing-gaming-holes on the Cube, but decided I would just go and peruse to see what was there without much in the way of specific targets.

I had totally forgotten that a couple years ago I picked up a boxed copy of Donkey Kong Jungle Beat and its included “DK Bongos”. Gamestop had a floor full of them for ~$20 (and extra bongos for about the same price), some time ahead of the deluge of upcoming, additional, crazy amounts of fake plastic instruments.

I pretty much picked up Jungle Beat and its “perphs” with the intention of eventually grabbing the Konga games. Up until this weekend I had not seen them sitting around on the used game shelves… either that, or since I had forgotten I was looking for them, I didn’t see them even if they happened to be in hidden in plain view. Much to my surprise and delight, I saw copies of both domestic Donkey Konga games on the “Used” shelves this weekend! It was $9.99, so with the 20%-off coupon, we’re talking about $8 for the game.

After a quick scroll-through of the song lists in the games on the iPhone (thank you, mobile ‘net access!) I decided that the first game was the clear winner of the song-list-battle. The Mario and Zelda themes? The dub Pokemon theme? Oh, c’mon. Sold. 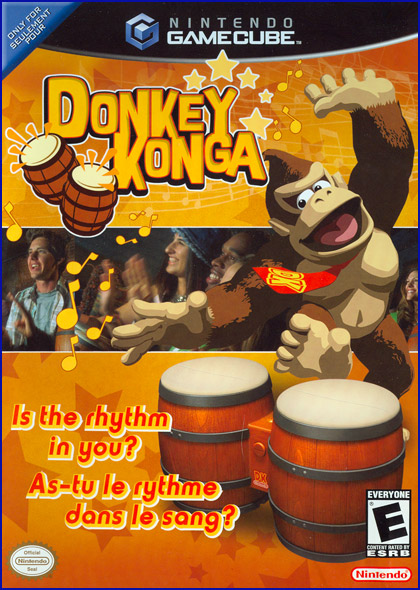 I’ve played a little bit of Taiko Drum Master (import and domestic) on the PS2 courtesy of Andrew, so I had a pretty good idea of what I was getting into in terms of gameplay. While I was not smashing fake plastic drums with fake wooden drum sticks, I was at least hitting fake plastic drums with my hands. Hit the left drum, hit the right drum, hit them both at the same time… easy enough. The one gameplay aspect I had to look up online was the blue/white sparkly icon on the timeline. While my copy of the game came with its cover and generic insert, it did not come with the actual instruction book. Turns out I have to clap my hands on those icons (having totally missed the little microphone/clap sensor on top in between the drum heads). Once I figured out what I was doing, it was clear sailing.

I decided to play on the Gamecube itself (as opposed to via the Wii) hooked up to an old tube TV due to the fact that it was a rhythm-based game, and I’ve had it up to here with lag (also correctly assuming that Nintendo would have nothing built into the game to compensate for said lag on newer A/V setups). I had a pretty good time in the 30-45 minutes I spent with the game last night (having already played R.B.I. 3 on the NES in the basement, and FFIV: The After Years on the Wii in the living room, now playing on the Gamecube up in the loft). My hands had enough of the smashing and clapping after about that much time, though I expect I could have easily played for an hour had I not already spent an entire day doing various activities around the house.

The “licensed” songs that I did play were probably the best of the bunch (“All the Small Things“, “The Impression That I Get“, “Right Here, Right Now“), and I can’t see myself visiting some of the more juvenile ones all that often (“The Loco-Motion“, “Campfire Medley“). The Nintendo-specific songs were all a blast to play, especially the bongo-ified version of the main Zelda theme.

As you complete songs (on either its equivalent of the “easy” and “medium” single-player difficulties available by default), you accumulate coins to spend in its in-game store. Yes, it’s another coin-collect-athon in the traditional Nintendo sense, and it fits right in with the rhythm game unlock system of the day; think of spending money to unlock songs in Guitar Hero II or playing a certain number of songs in DDR to unlock new courses.

While you can spend the coins on “expert” levels of songs (as I did for the dub Pokemon theme song, which playing will accumulate a higher number of coins), you can also spend coins on new sound effects for the bongos. You have standard bongo sounds and NES-style beeps available at the start, and I decided that I would spend some cash on Zelda-inspired sound effects to complement the default ones. After selecting a song, banging the bongos to the left and right allows you to select these custom sound effects, so now I am banging out heart-collecting sounds and Link yelps. These custom sound effects cost significantly more than “expert” versions of songs, so you’ll have to decide on your own which kinds of unlockables you want to shoot for first.

I certainly enjoyed what I have played so far, and see myself having another couple rounds with the game in the near future. More so than either of the North American Donkey Konga releases, though, I have found myself incredibly enthralled by the prospect of importing Donkey Konga 3. Its track list is impressive from both a gamer perspective (a song from Katamary Damacy, plenty of Famicom remixes) and an anime perspective (“CHA-LA HEAD-CHA-LA” from DragonBall Z, “Mezase Pokemon Master” from Pokemon, “Re-write” from Fullmetal Alchemist). The going price on eBay seems to be $25-40, which is pretty fair considering it’s no longer available new on sites like Play-Asia.

Of course, here’s my biggest problem: 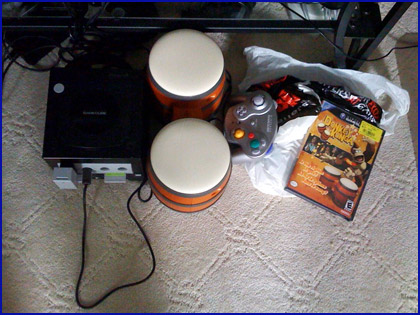 Since unpacking the DK Bongos, I have even more fake plastic instruments sitting around on my floor with no real place to appropriately store them.

It is always interesting when a band re-records a song. Whether it is for some type of anniversary release, stepping up to a major record label, or some other situation where it is necessary or … [continue reading]

So yesterday and today were the press conferences / media summits / whatever they are for Microsoft, Nintendo, and Sony (in that order). As to be expected, I followed along with all the live-blogging, checked … [continue reading]