You may have heard on the podcast several times that Andrew and I… well, we like easy games. We’re busy people, and hard games take up too much time in our crazy adult lives! To be fair, I don’t think either of us actually want complete cake-walks for games; rather, we want a gaming experience that we don’t have to fight with. Games have progressed a long way over the decades, and the shift to 3D has finally gotten to a point where we’re not constantly rotating a camera around ourselves (see: Super Mario 64… which, don’t get me wrong, I love!).

With all that in mind, it should come as no surprise that the latest iteration (and incarnation) of Prince of Persia is thoroughly intriguing to me. You can’t die? You’re not severely punished? You can get right back into the swing of things quickly after messing up? Sign me up. 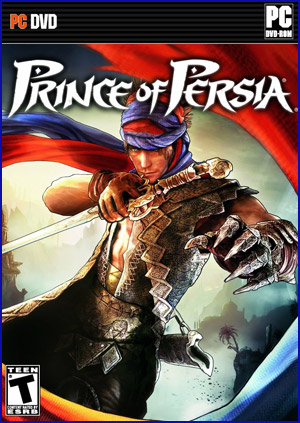 (Related side note: Don’t you just hate fighting games that don’t offer a “quick continue” option when you lose in story/arcade mode, forcing you back to a character select screen, rather than just click-and-replay…?)

After tossing in my new GeForce 9800 video card, I’ve been looking for things to show me beautiful imagery on my computer screen. Not really wanting to go the FPS route any further (sorry, Crysis), the consideration you should obviously see coming would be the newest Prince of Persia. While it is also available on PS3/360, since I won’t have an HDTV set up until we move in the next couple months, the only way to see the game in its high-def glory right now would be over on the PC running at 1600×1050 with the settings turned all the way up.

This particular game has been a curious case for me. I am fully capable of running it, and Ubisoft announced prior to the game’s release that the PC version would be shipping without any DRM on it (the retail version, anyway; Steam’s would still have its own DRM integration). Being able to install it right onto the hard drive without needing to keep a DVD in the drive (or otherwise cracking it to do so) is one of my current obsessions, and partly why I’m often found playing PSN / Xbox Live games more than anything else (you may call it “laziness”, but I call it “comfy convenience”).

As many pundits and general gaming “observationalists” (yes, I’m coining new terms) were quick to point out, Ubisoft’s “No DRM!” decision was not necessarily a case of freebies, giving back to the gaming crowd, or any other type of selfless act. There may be a bit too much conspiracy theory at work, but it’s not beyond a reasonable doubt to assume that using such a high-profile game to later claim, “Hey, look how much it was pirated, despite us giving the gaming crowd exactly what they asked for with no DRM!” gives them an easy out to revert back to typical destructive measures.

Fast-forward to this week’s announcement of new downloadable content for the game (including a playable epilogue to the story and new outfits based on the original character designs) for the 360 and PS3… but not the PC version. Wait, why no PC version content? The current official word from Ubisoft is that it is due to “business reasons”.

Am I too far off to see this conversation going something like:

– “We have released the game DRM-free just like everyone asked!”
– (game gets pirated as it normally would have anyway)
– “We have new downloadable content coming for the 360 and PS3!”
– (asked for clarification on no PC DLC)
– “Due to the low sales figures and overwhelming piracy rate for the PC version, we have decided not to support DLC in this particular version of the game.”

…? What do you think? Does this make you second-guess picking the game up if you haven’t already, or drive you more towards a console version? Were you not even considering the PC version in the first place?

Hey. In the new house. Let’s blog, again. So as you may have read on the site and heard on the podcast, I received a replacement Xbox 360 last September. I did not have a … [continue reading]

Not wanting to seem entirely biased in one direction (though it’s mostly true), it looks like I have to cough up a little disappointment due to the fact that in-game content and DLC for The … [continue reading]